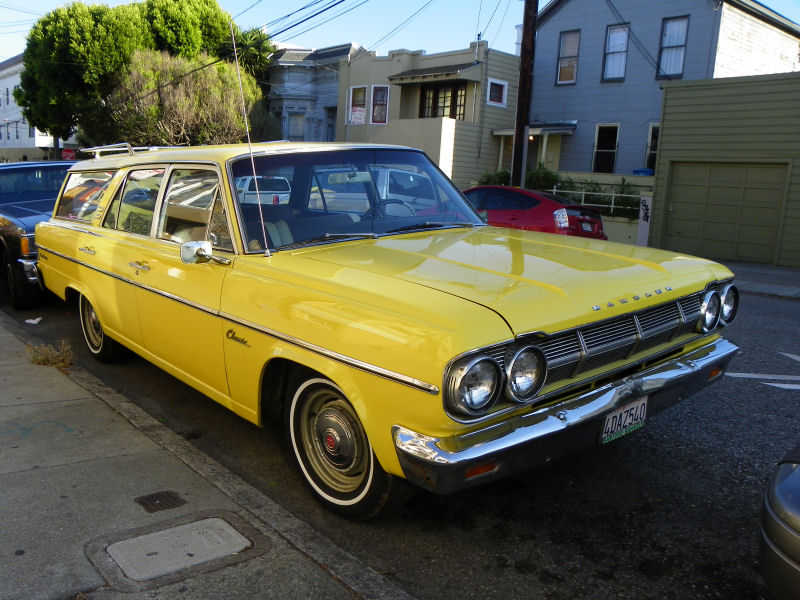 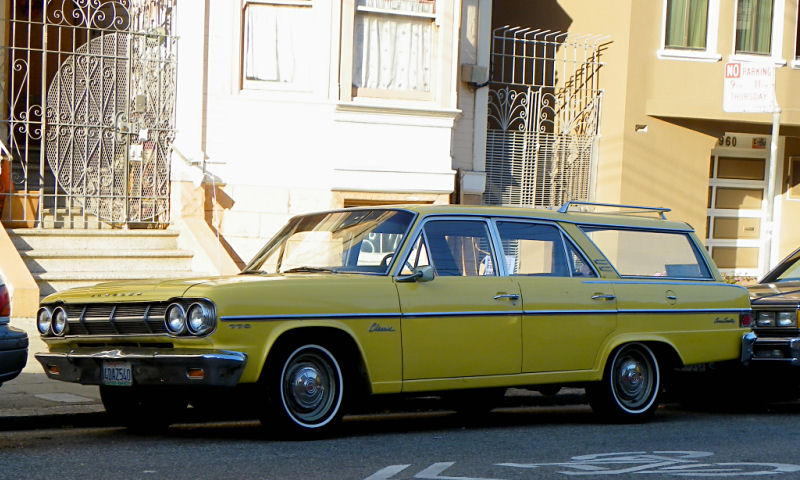 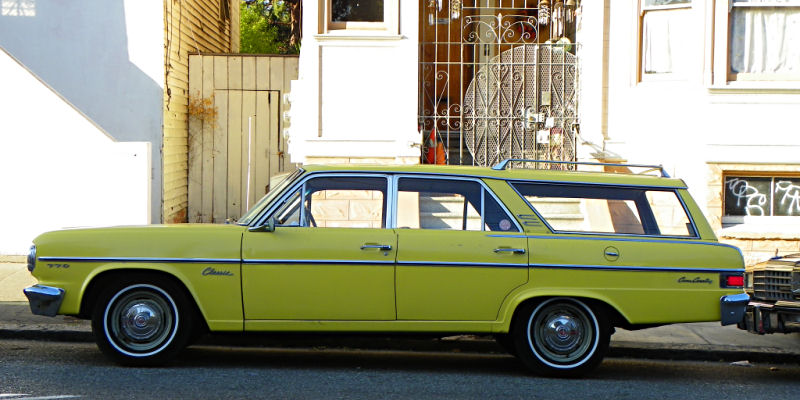 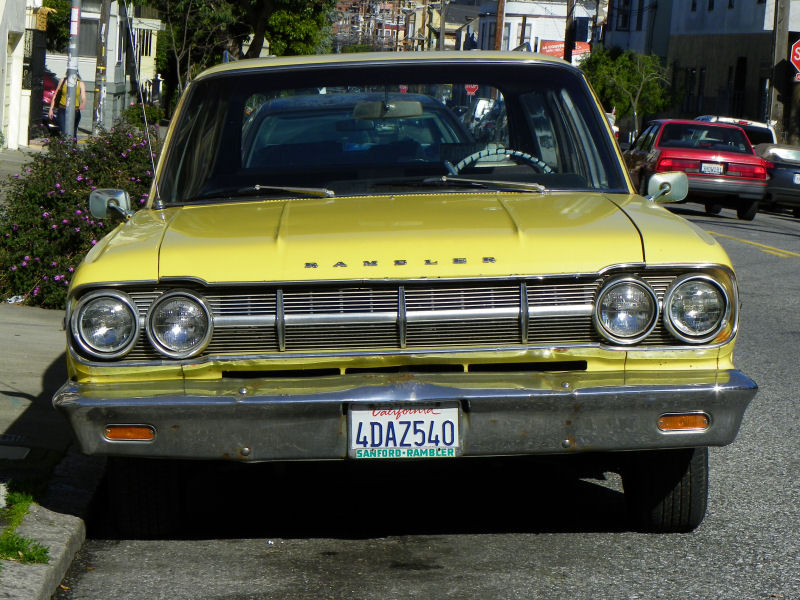 If it reminds you of another Rambler I posted once, that's because it's very similar to the white Classic 770 which I misidentified as a 1966. The mistake was due to the unusual way in which AMC placed the trim level badging. Notice that on the 1965 model, the 770 badge appears on the leading edge of the fender, but only on the driver's side. The white car had a small rectangular 770 badge underneath the "Classic" fender emblem on the right side. This yellow car has no such trim badging on the right side. That indicates the white car was a 1965 model with a passenger-side fender from a '66. In my other feature I thought the car's chrome side spears were 1966 items. However, this is not the case. Side spear trim between 1965 and '66 was the same on the 770, and my research was flawed. Lower-level Classics like the 660 had a trim spear which ended midway across the front doors. 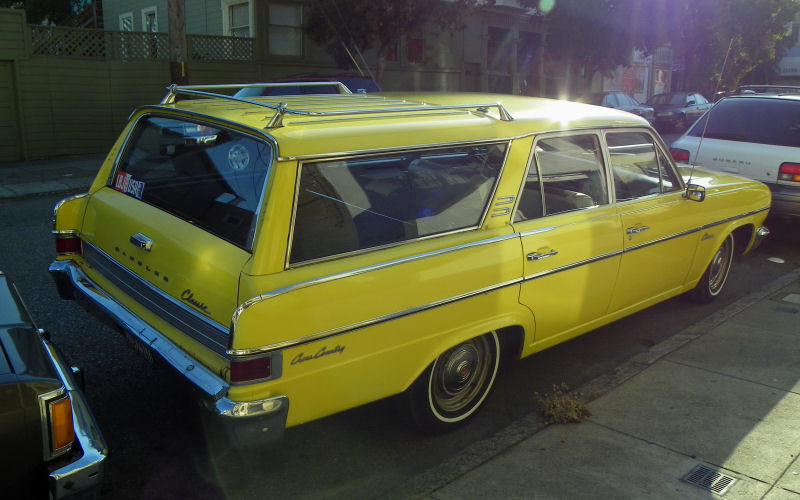 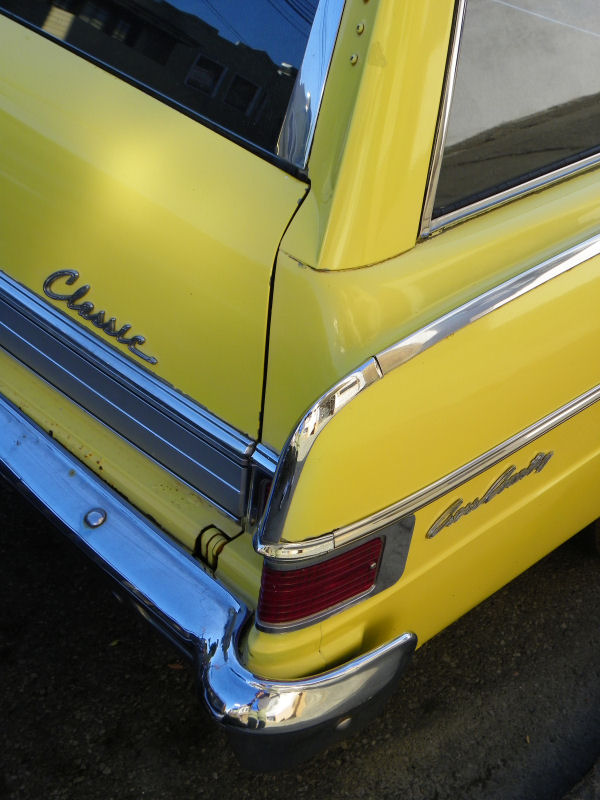 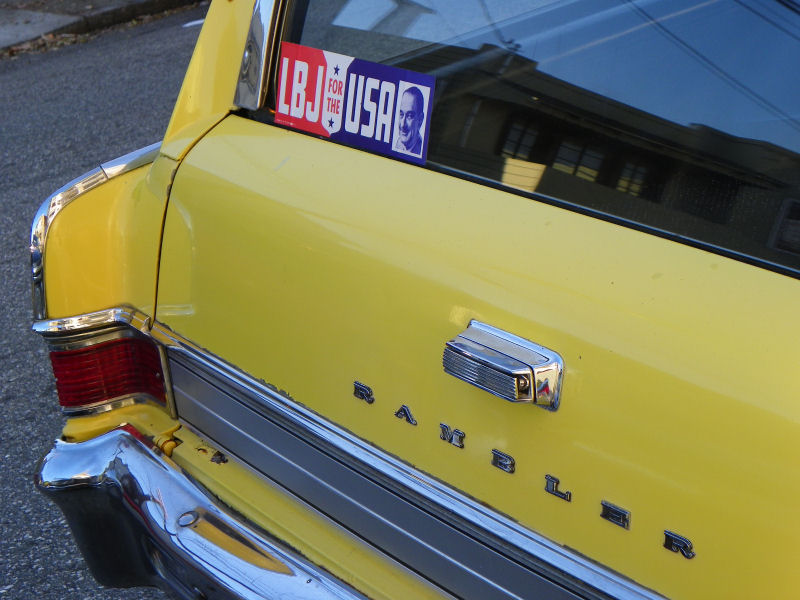 My favorite detail of this car would have to be the vintage "LBJ for the USA" bumper sticker on the rear hatch window, advertising Lyndon B. Johnson's presidential campaign. This car's condition is very good for its age; it could almost pass for an unrestored "survivor" - except that no bright yellow paint color was offered by the factory in 1965. The front license plate frame from Sanford Rambler hints at the car's history. Sanford Rambler, founded the year this car was built, was a dealership located in Tacoma, Washington. The dealer remained in business until 1983. This car's license plates were issued around 1999 or 2000, so it may have moved to California around that time.
Today, this Rambler lives in San Francisco's Mission District. Sadly, a photo search on Flickr during the writing of this feature reveals that, in the time since my pictures were taken, the LBJ sticker has aged badly. It makes me wonder if it was a fairly recent addition, since the car is a 1965 model and Johnson ran for president in 1964. Either the car was brand new when the sticker was added, or perhaps someone bought an original bumper sticker at a later date and put it on the car to be hip. I don't want to jump to conclusions, but you can still get original '64 LBJ campaign stickers on eBay for under five bucks. If I were a hipster trying to be ironic, I'd probably have put on a Nixon/Agnew '72 sticker instead. But that's just me. It's still a cool car either way.
Posted by Jay Wollenweber at 12:00 PM