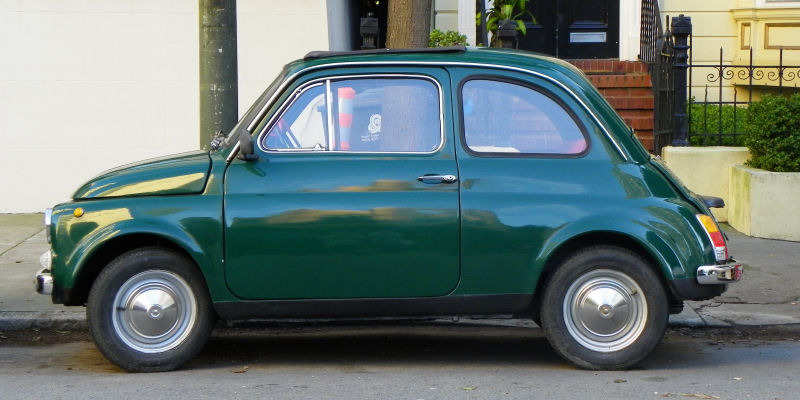 I noticed I've featured a long streak of American cars with very few imported vehicles sprinkled here and there. So here's something utterly, undeniably Italian: the venerable Fiat 500. Fiat's "Cinquecento" (500) city car is one of the more recognizable designs to come from the country shaped like a boot, up there with the prides and joy of Maranello and Sant'Agata. Produced from 1957 until 1975, the 500 was perfect for the narrow alleys and congested streets of Rome and Turin. Outside of Italy, in cities all over the world where parking space was at a premium, one could probably find a Fiat 500. 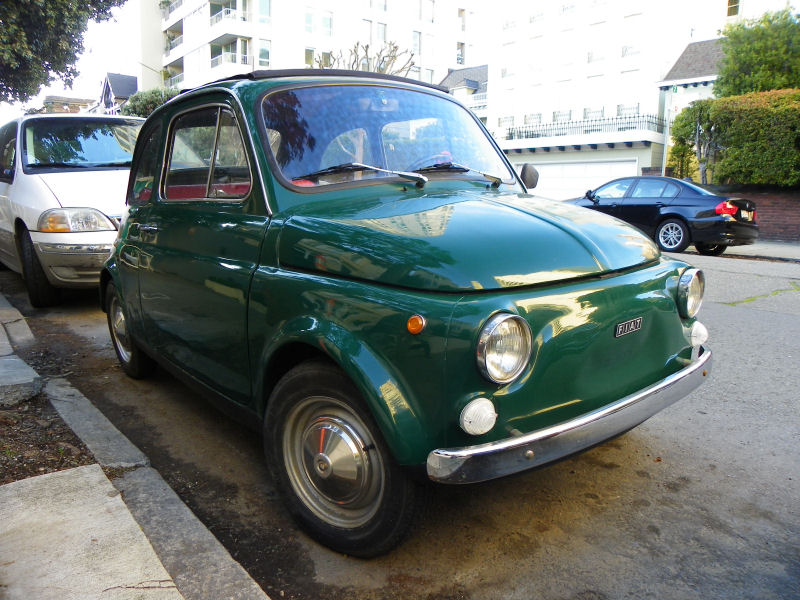 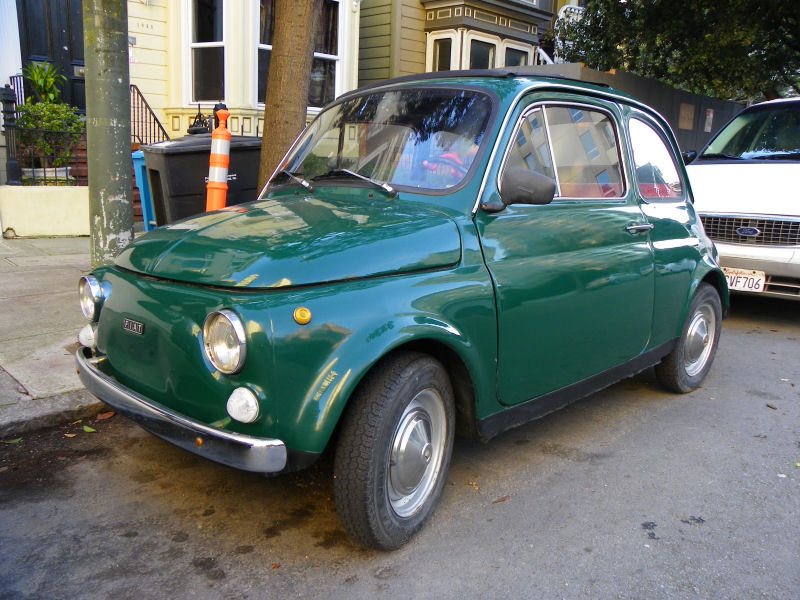 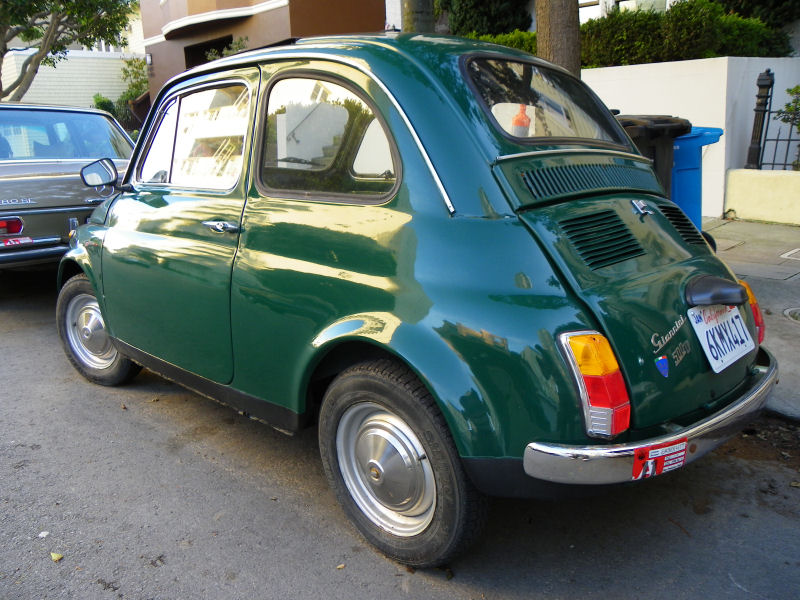 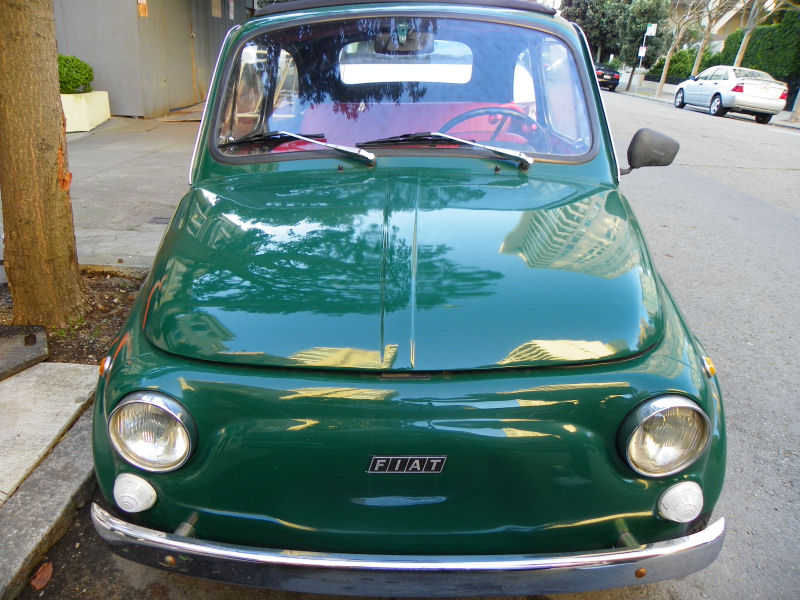 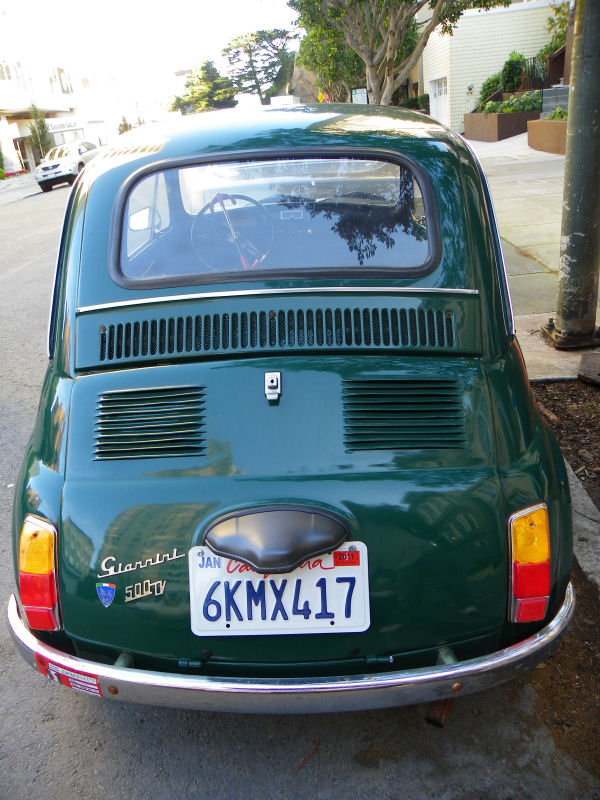 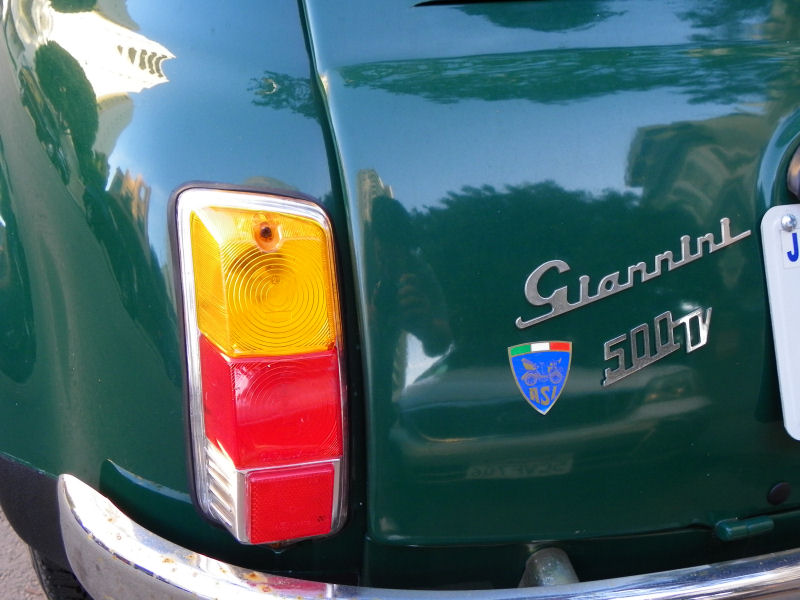 In the United States, however, it was a different story. Officially, one could only get a 500 here from 1959 to 1961, and they were kind of goofy looking with bigger bumpers and oversized headlights that jutted out above the hood like bug eyes. Not that any of the changes would help if you got hit by an insert-name-here American car. By American standards the 500 was too miniscule, too loud, too underpowered and too basic inside. In a country where the much larger VW Beetle struggled to get up to highway speeds with double the horsepower (54hp), the Fiat must have seemed even more palsied with only 23(!) on tap. I can imagine that tiny, low-power formula working just fine on winding cobblestone streets ten feet wide running past sidewalk cafes, where the biggest hazard is some yahoo on a moped. Now, import that same car into a place like San Francisco, where the streets are wider, the cars are bigger, and the hills are a whole helluva lot steeper. Does that classic "city car" formula still work?
This Fiat looks to be a later model, built sometime after 1966 (the year the company changed its logo to a rhomboid shape containing the word FIAT in italicized letters on a dark background). That only narrows the model down to the last decade or so of production. Regrettably I can't tell the outward differences between a 500F, 500L or 500R without looking at badges or researching year-to-year changes.
What throws another wrench into the works it that this car carries the badging of a Giannini 500 TV, a hotted-up version tuned by Domenico Giannini. If it's legit, that makes it a fairly rare car, but those badges can be bought for about $100 online from companies such as MrFiat.com, and nearly everything else one would need to make a credible replica of an original Giannini car can be sourced brand new depending on how much money one wants to spend on a car smaller than an original Mini.
This car is likely one of the many imported from Europe over the years. It's in good shape, probably rather nicely equipped as 500s go. The paint color is likely not stock since the last year a green color was offered was 1964, before Fiat changed their logo. It's taken a bit of a smack on the front end below the hood, but the body is otherwise straight. It appears to have the tubular bumper extensions which were introduced in 1968 on the 500L, but lacks the L's extra front bumper guard so it may be a '72-75 500R. I'll keep you posted if I find out.
In the meantime I'll continue to wonder how this car managed to reach the top of the hill it was parked on.
Posted by Jay Wollenweber at 4:22 AM