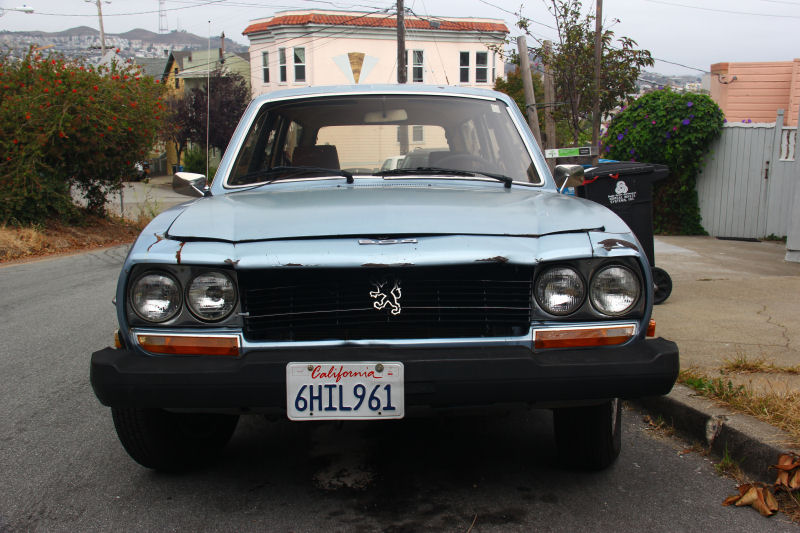 Today is Bastille Day, a very big holiday in France that commemorates the storming of the Bastille fortress-prison in 1789. It was a turning point in the French Revolution and is celebrated as a symbol of national unity for the French people. So in recognition of that, today we feature a French car. 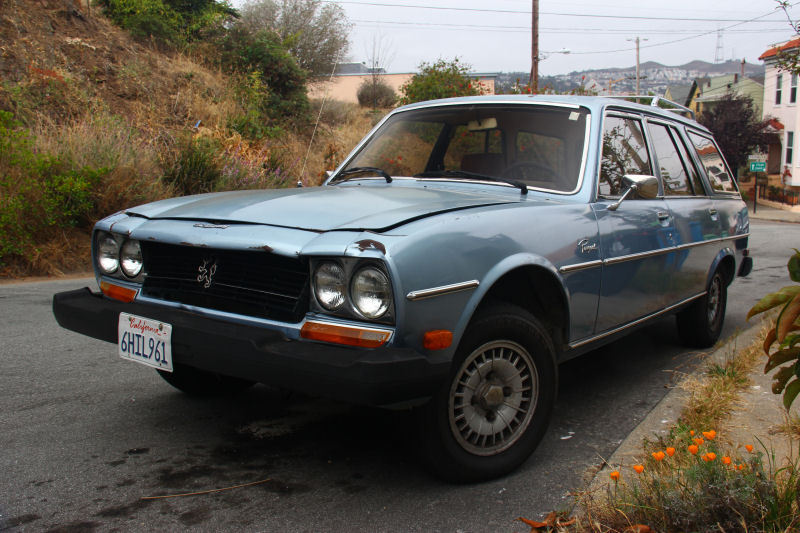 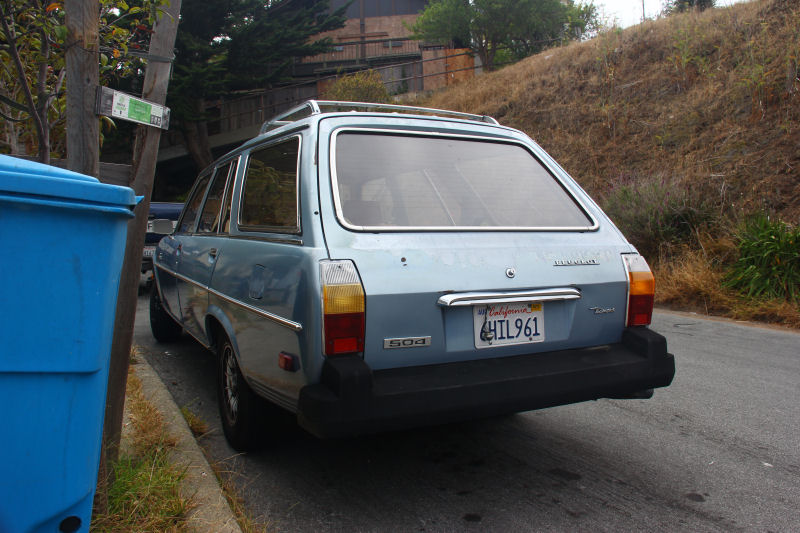 When people talk about misspent youth, a lot of them refer to experimenting with sex, drugs and rock and roll. I spent a fair portion of my 20s exploring San Francisco, carspotting. It began as a side activity during college, wandering around on foot after class. After graduation it evolved into occasional day trips in my car or with friends, scouting areas and documenting what I found. This late 1970s Peugeot 504 diesel station wagon is up there with some of the more unique vehicles that turned up in the city. 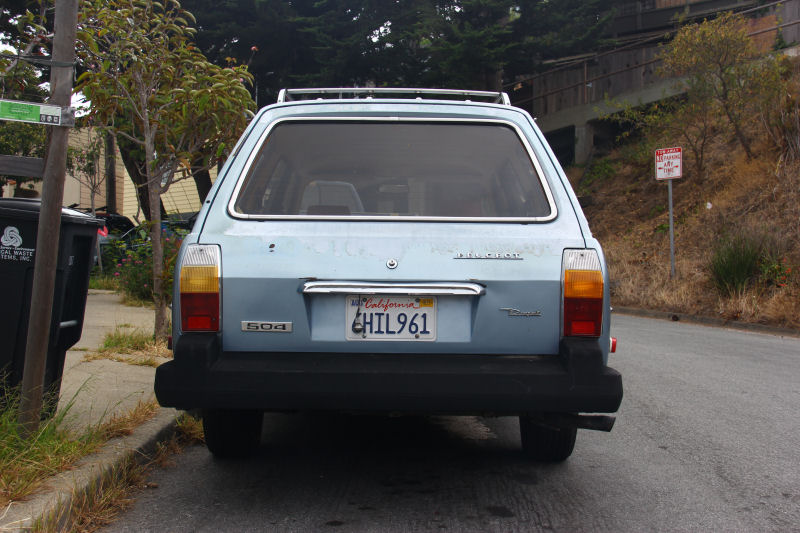 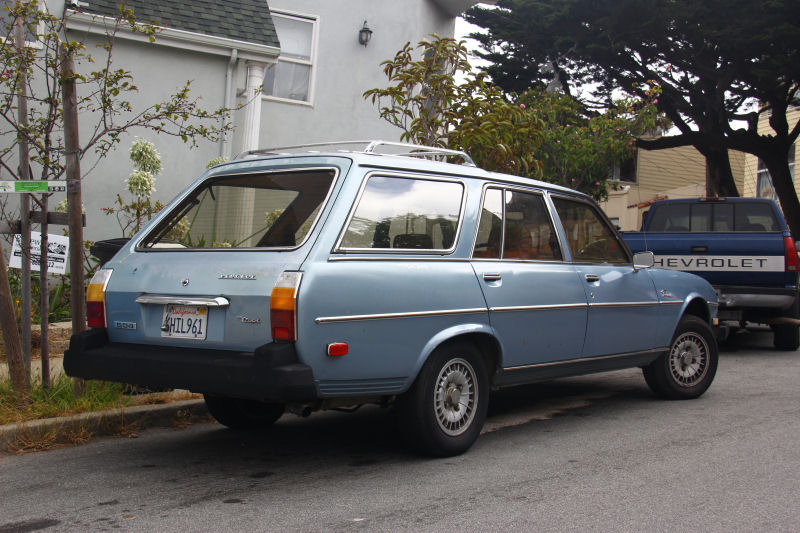 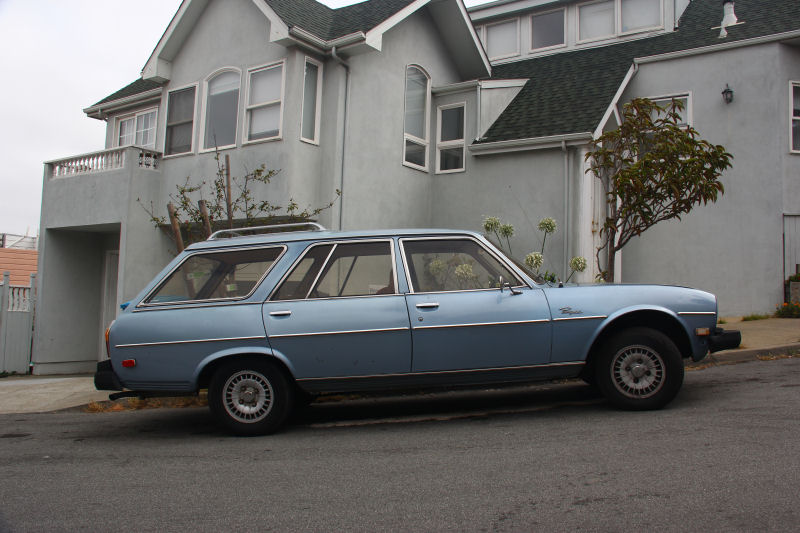 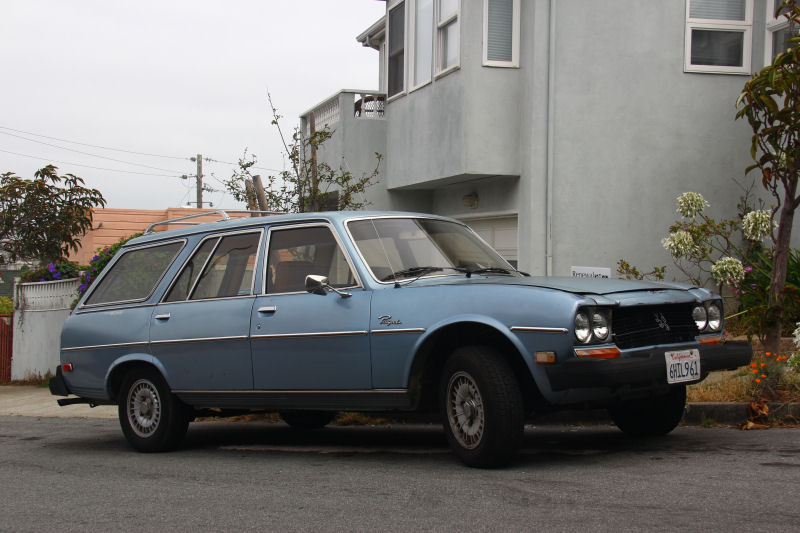 I've always been intrigued by French cars in America. They always struck me as the odd duck car, the eccentric professor's vehicle. Renault, Peugeot and Citroen all had a presence in the U.S. for decades, yet one hardly ever sees them. The rare French car mechanic or European specialist in town is the hero for these owners, unless they learn to tinker on and service their car themselves. These cars often became a punchline for how strange, or how slow, or how difficult they were to find parts. And yet, if taken care of, many have proven they can last.

The Peugeot 504 is a beloved car in many parts of the world. Factories in Africa built them as late as 2006, 23 years after French production ended. They were also produced in Argentina and China and saw widespread popularity as a truck or other commercial vehicle for their ride quality, toughness and reliability. In the United States, however, the Peugeot 504 was a painfully slow car that looked ungainly to a car buyer used to an 18-foot barge penned with a slide rule and powered by a V8. To add insult to injury, the car was offered with a 2.3 liter diesel engine making 70 horsepower and 97 lb ft of torque. Even in the emissions-choked 1970s it was unusual to see a car that took 19 seconds to reach 60 mph. It was a strange time, when American manufacturers tried to play the diesel game and it seems like they soured many U.S. car buyers on diesel cars well into the 21st century. To this day, finding a diesel car that isn't German is kind of unusual. And even then, VW's "Dieselgate" scandal of a few years ago set diesels back once more in America. 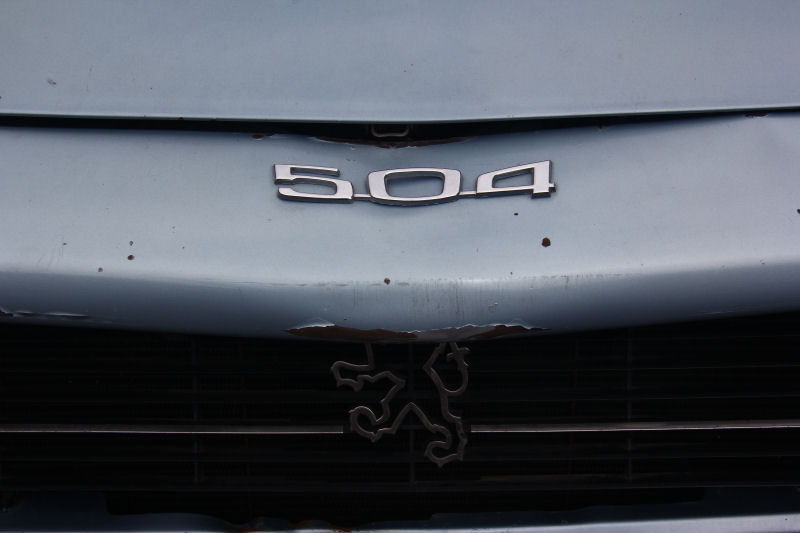 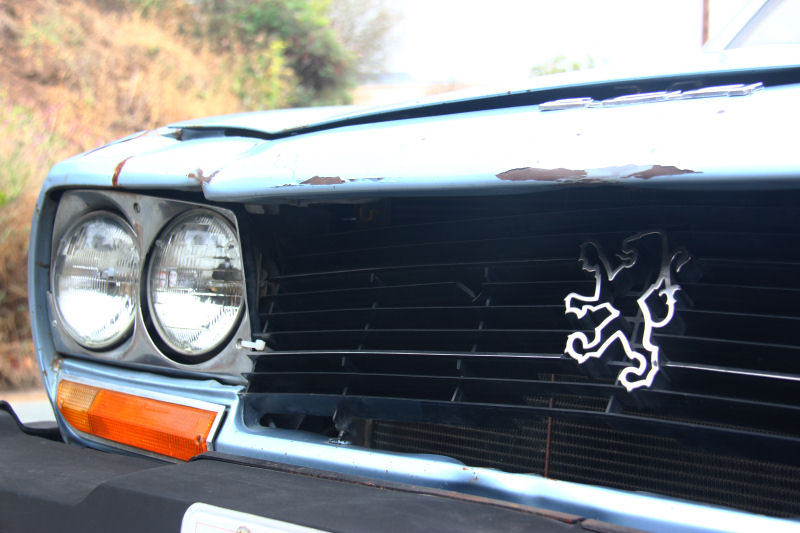 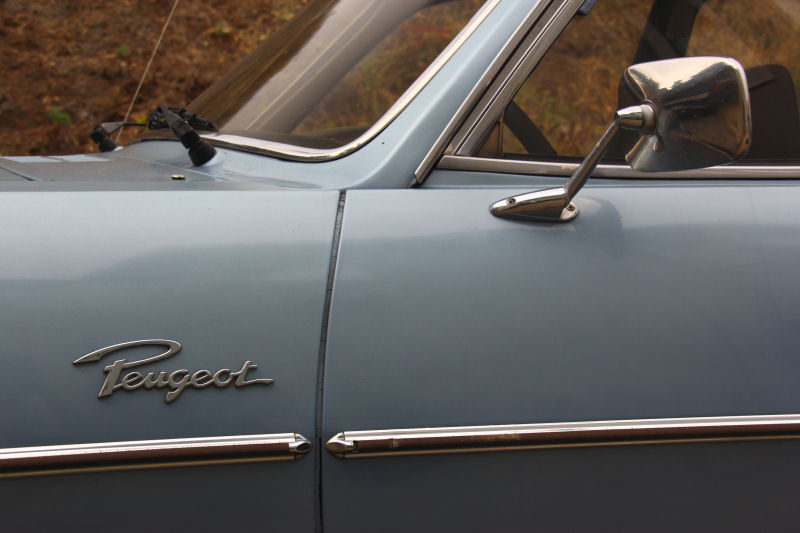 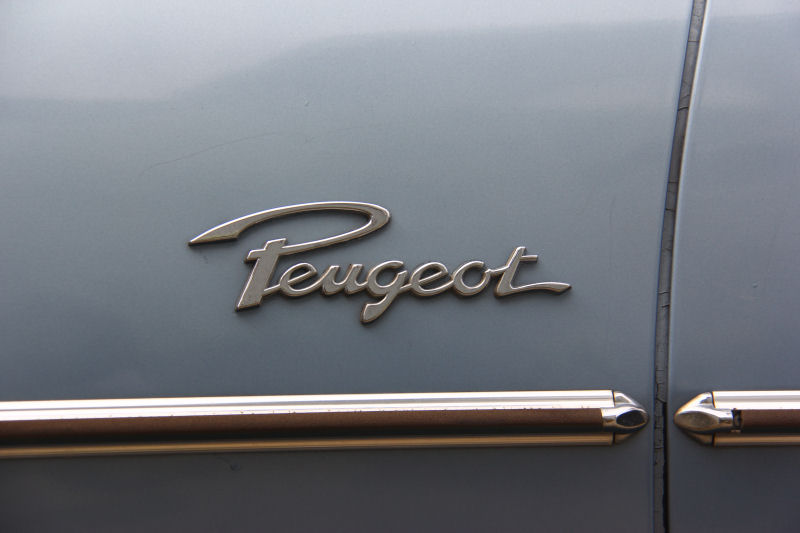 In any case, the Peugeot 504 Break is a unique car. They have cavernous interior space, which I've read can hold a "normal-sized refrigerator" in the back. It's been compared to a Mercedes W123 240D diesel in terms of being a nice, premium car, solidly built, but you simply cannot be in a hurry to go anywhere. The glow plug system is slow on startup, the car has no power, and it's just big. The wagon is 13 inches longer than the sedan, 190 inches in total length. The dimensions and curb weight of 2900 lbs are roughly equivalent to my 1985 Pontiac 6000, not particularly large or heavy by my standards but definitely underpowered for the size. The 504 is a rear-wheel-drive design, and while the sedans have independent rear suspension that gave them world-famous ride quality, the wagons use a solid rear axle for carrying heavier loads. This one appears to be a manual transmission since I didn't see a cutesy "Automatique" badge anywhere. I can only imagine how slow an automatic with dealer installed air conditioning would be. 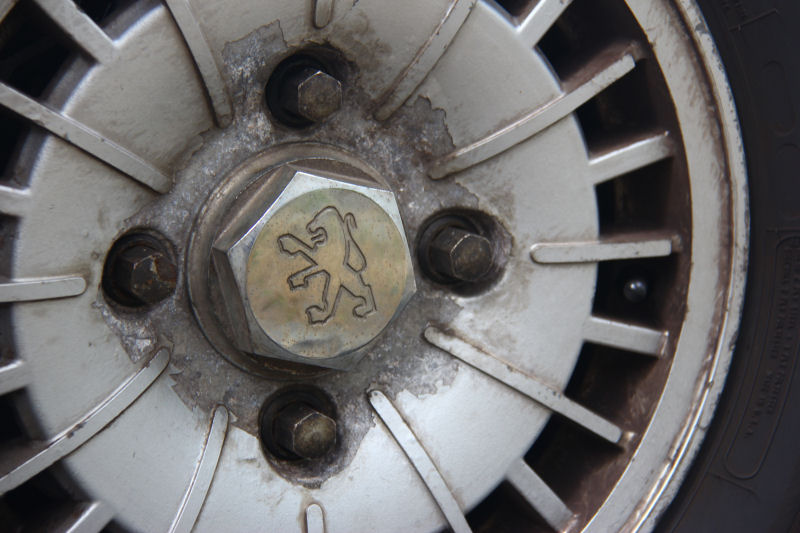 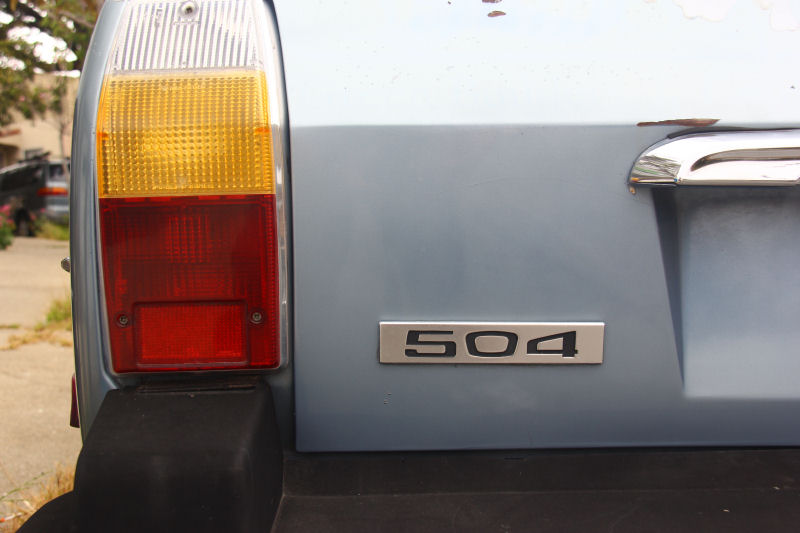 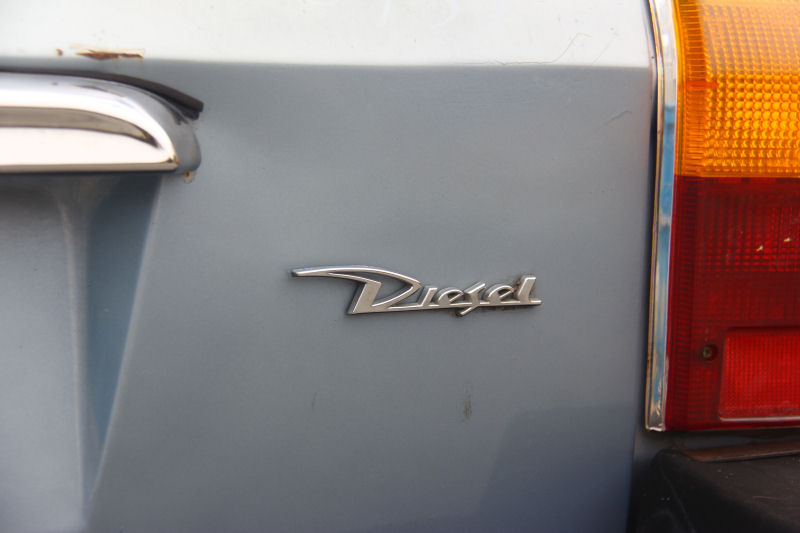 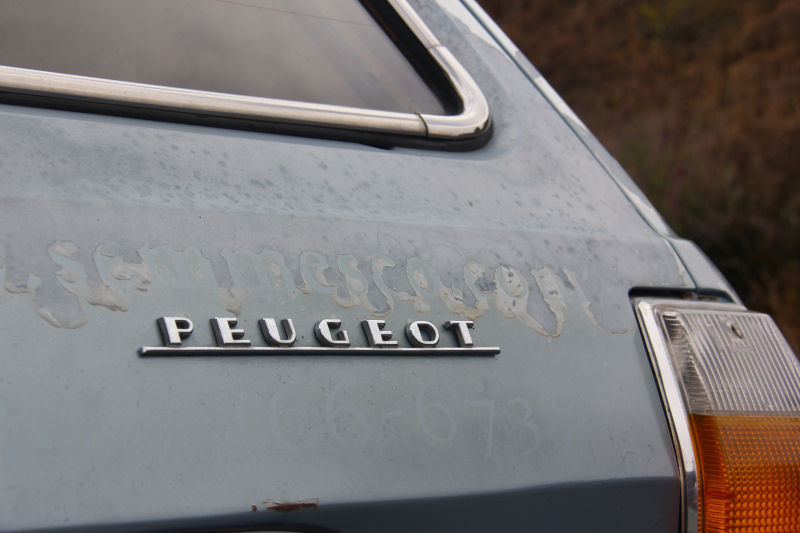 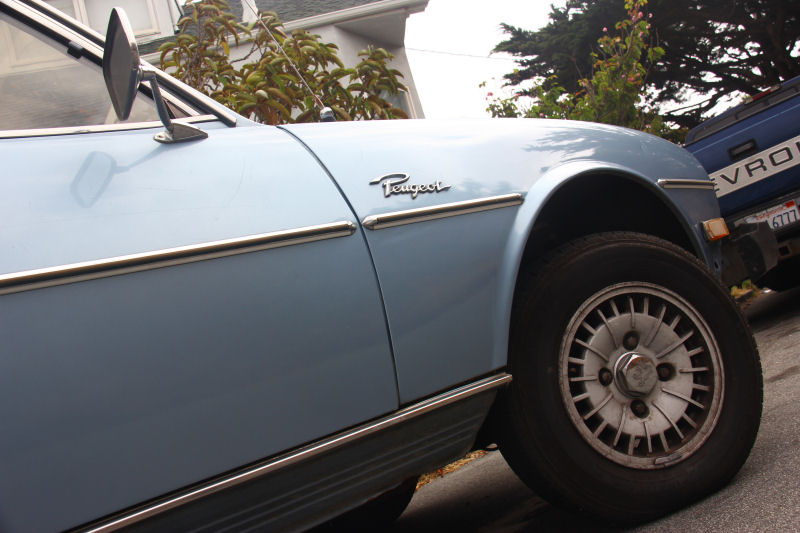 I attempted to narrow down the model year of this car the best I could. It appears to be a 1977-79 car; I guessed at 1978 because I found a '79 online with a rear wiper, which this car does not have but is otherwise identical. Visually the cars changed so little that Peugeot themselves often used the same photos in their brochures for multiple years. This car was a bit beat up, unfortunately. It had front end damage that might never be repaired owing to parts scarcity in the U.S. The paint on the rear hatch was failing around where one can still see the ghost of some old stickers that used to advertise a business. I do quite like the old script badges and the dainty, multi-adjustable chrome side mirrors. This car appears to have had its wheels upgraded to ones from a later Peugeot 505. Perhaps the car's worst design feature would be its massive government-mandated rubbery black bumpers. All that energy-absorbing material only to be defeated probably by a taller-riding SUV. Still, these photos are five years old as of this writing. I hold out hope that this unusual French station wagon is still on the road and received some restorative attention.