Today marks the eighth day of the fabled countdown to Christmas. 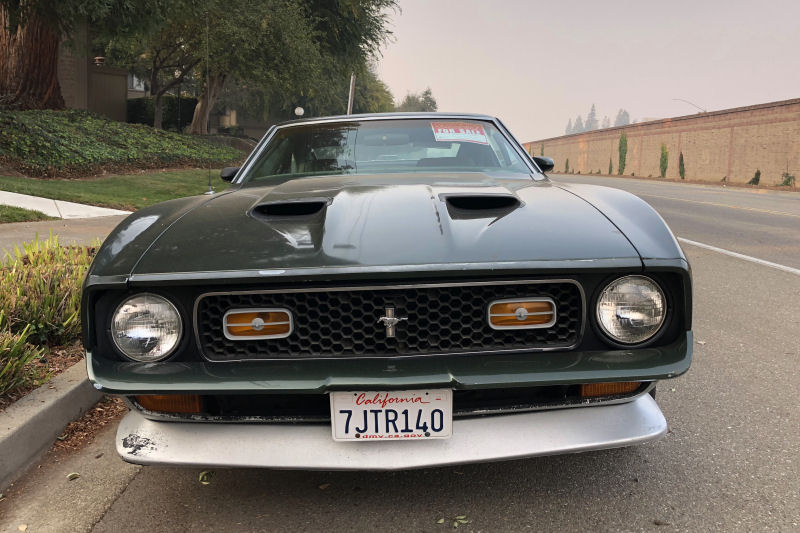 Admittedly some of my adaptations of the original 12 Days of Christmas are rather forced. While Ford did offer a color called Black Jade on the Mustang in 1969 and 1970, this is not it. No, this car wears the hue creatively named "Dark Green". But Dark Green doesn't rhyme with "eight", does it? Forget it, I'm not apologizing for anything. 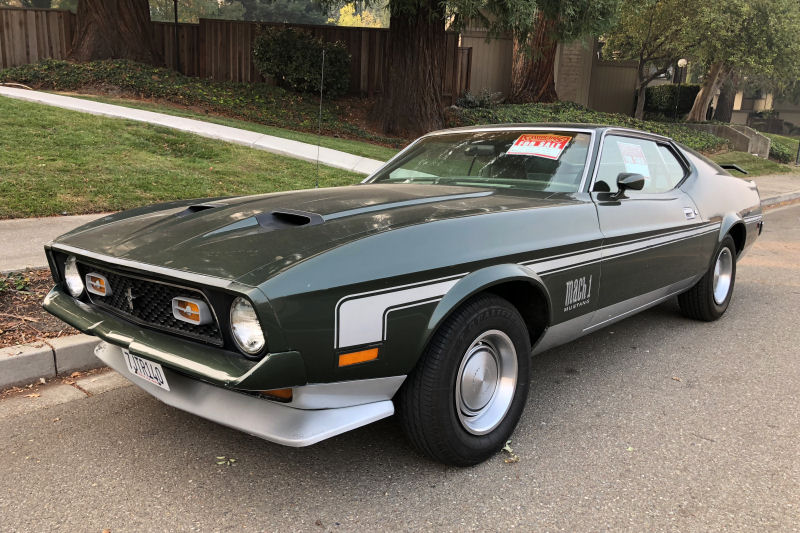 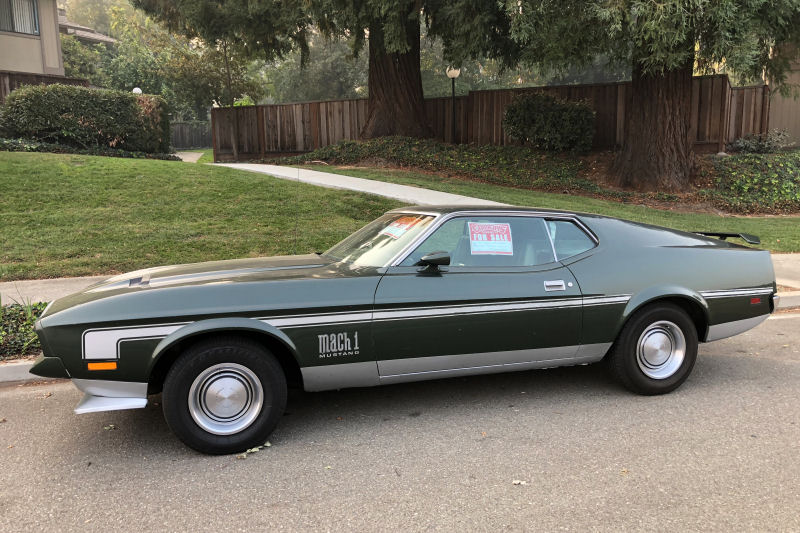 I found this car for sale locally on a busy thoroughfare where I've shot quite a few cars. Unfortunately it was around 4pm when traffic was getting heavy and I didn't want to risk my life over a '72 Boxstang. So I don't have a proper profile photo. I can't help it that the car is so large that you have to dart out into the road between traffic light changes to fit the whole thing in the viewfinder of an iPhone. I've crossed that busy four-lane before but it's not worth it at commute hour. The sky was very hazy that day due to the Camp Fire up north in Paradise. I was initially worried because the seller's phone number had an area code from up near there and I thought the Mustang might be a refugee of the fire, rescued just in time. I never found out but I hope everything is all right for the owner. 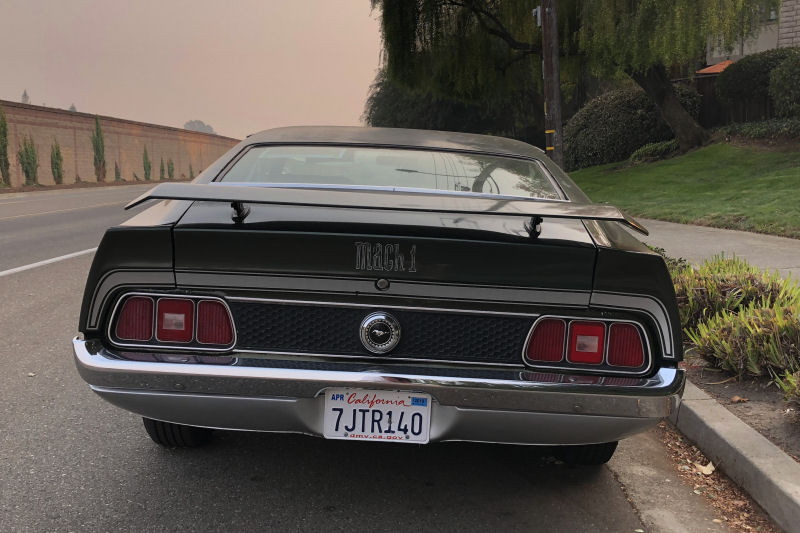 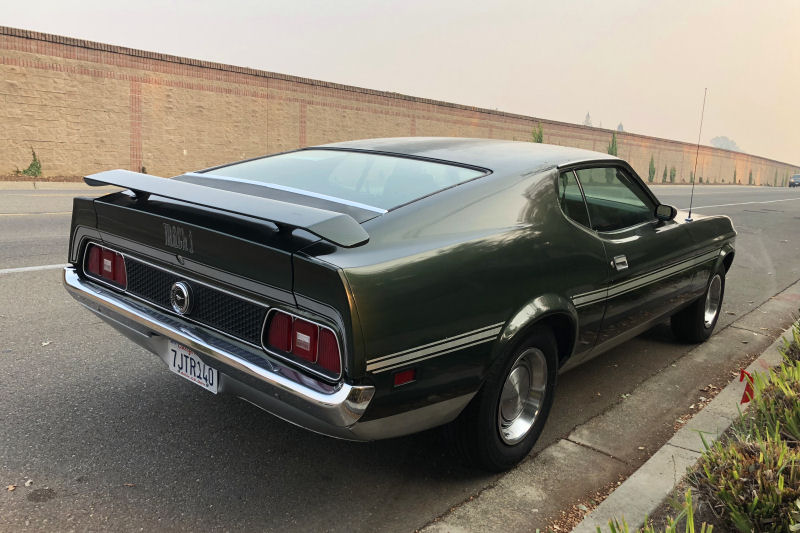 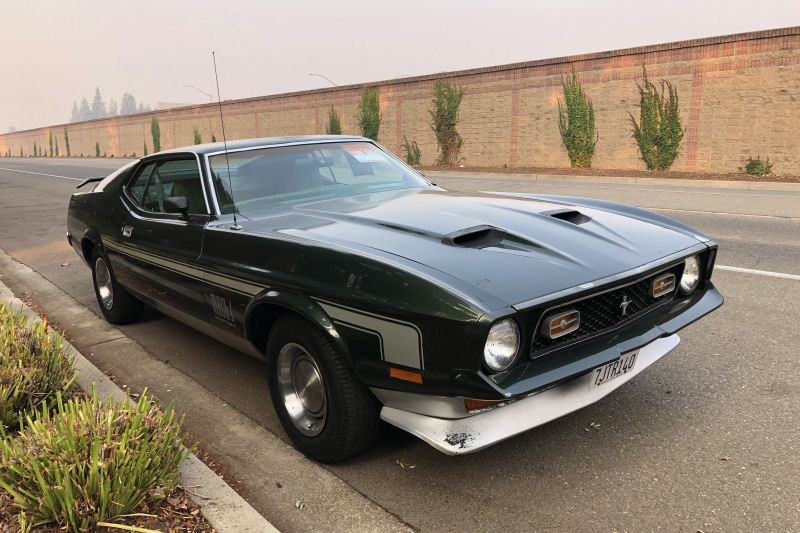 I suppose I should talk about the car you're looking at right now. It's a '72 Mach 1, which was basically the replacement for the GT package. On a 1969 or '70 Mustang that meant something and you had a mean-looking muscle car that competed with the likes of the Boss 302 and Boss 429, as well as Carroll Shelby's GT350 and GT500, for showroom traffic. Where the Boss cars were homologation specials built for the Trans-Am road racing circuit ( Boss 302) and NASCAR (the Boss 429's engine), the Mach 1 was pretty much whatever you wanted it to be. It was available with a 351 high performance V8, or a 390, or even a 428 Super Cobra Jet with ram air intake if you wanted to go drag racing and not turn corners.

Things started to change when the so-called Boxstang came out in 1971. It was big and a little awkward and hard to see out of. The Mach 1 package was still performance-oriented and came with the regular 302 V8 and an assortment of stripes, hood scoops, air dam, spoiler and black honeycomb pattern trim and body paint accents to set it apart from your neighbor's six-cylinder Mustang Grande notchback. It was the final hurrah for the big engine options, with a 351 Cleveland or 429 Cobra Jet available that was significantly more powerful than even the 1970 Super Cobra Jet (375 vs 335 hp). All engine power ratings would drop in 1972 due to more stringent emissions regulations and a switch to "net" power calculations instead of the old gross horsepower system. This one features the 351 engine but I don't know which version (a 351 produced anywhere from 177 to 275 hp depending on which intake, compression and carburetor setup you ordered).

As the seventies wore on, the Mach 1 was gelded more and more. A yellow '71 Mach 1 dressed up as a '73 starred as "Eleanor" in H.B. Halicki's 1974 car theft epic film Gone In 60 Seconds. By that time the Pinto-based Mustang II was in showrooms and offered a Mach 1 package that was a shadow of its former self, featuring a V6 making 105 wheezing ponies and a small badge and special paint trim. Go figure that it was more popular than all the previous Mach 1s combined. 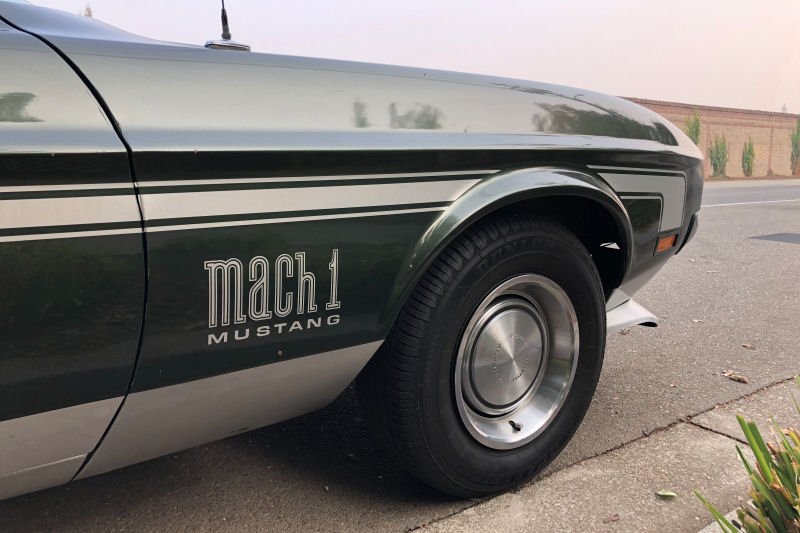 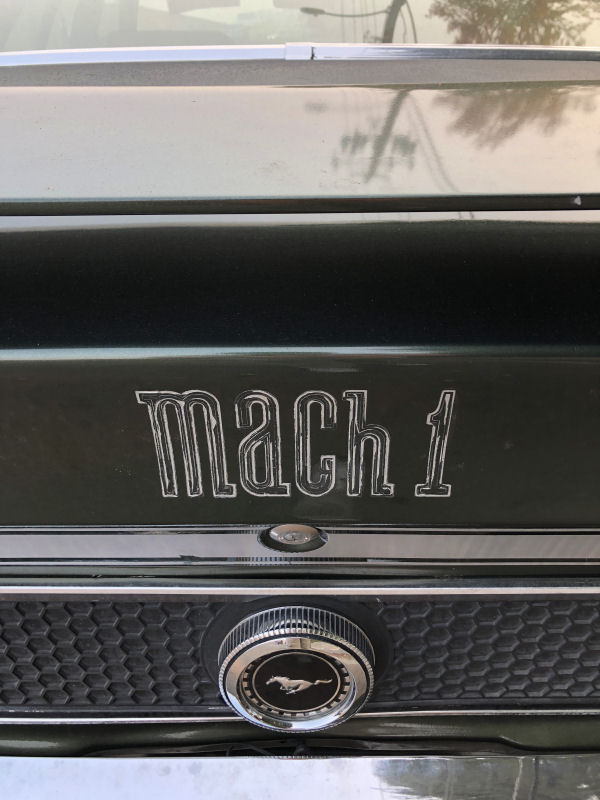 This Mach 1 is a solid example that needs a little bit of work but I'm sure it's a great driver. I would venture that the paint is original. It could use a respray on the roof where the topcoat has faded, and some touchup on the front air dam and the rear Mach 1 lettering. Other than that, I don't see much wrong with it. It won't win any concours shows but you can certainly have fun with a car like this.

Photographed November 2018
Posted by Jay Wollenweber at 12:00 AM