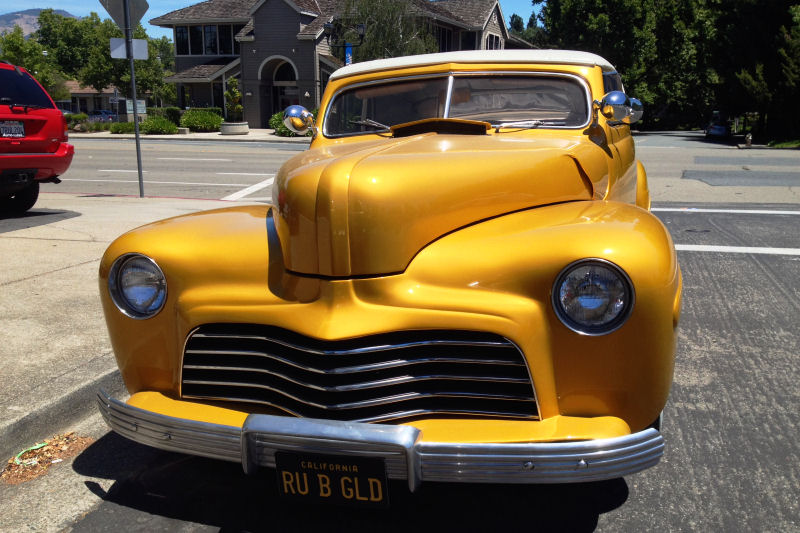 Every so often I pass by a shop in Danville and there's something interesting parked off on the side street. This usually happens while I'm on the clock at work in my van, so I can't stop. They aren't always there when I come back, and I usually don't get to meet the owner. This time I got lucky. 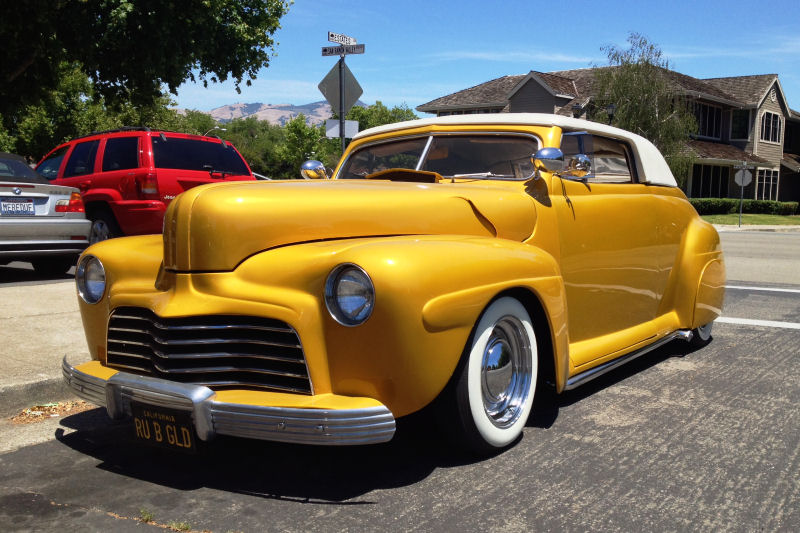 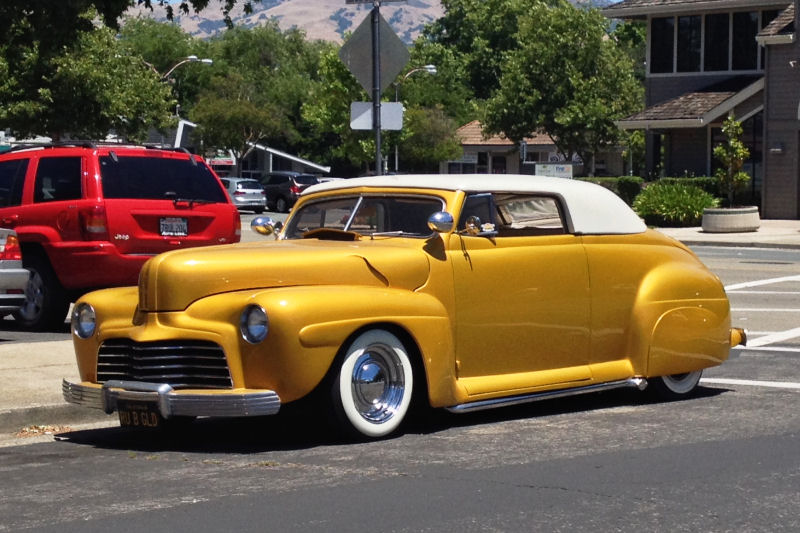 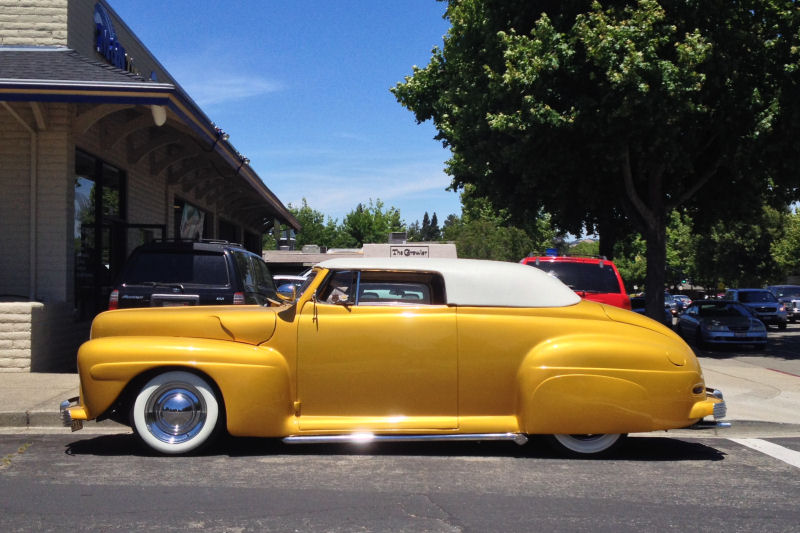 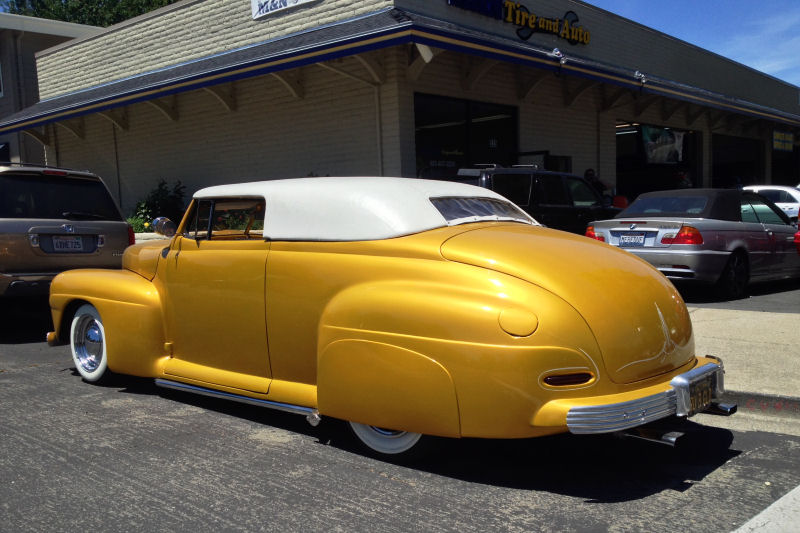 This 1946 Ford DeLuxe convertible has been thoroughly customized. The owner happened to come outside while I was taking pictures and told me some things about the car. It had come from back east and he had just purchased it as a present for his wife. It was to be a surprise for her so I decided to wait a good long time to feature it here. I also managed to find a copy of the for sale listing for the car which provided a great deal of info about it. So here's what I can surmise. 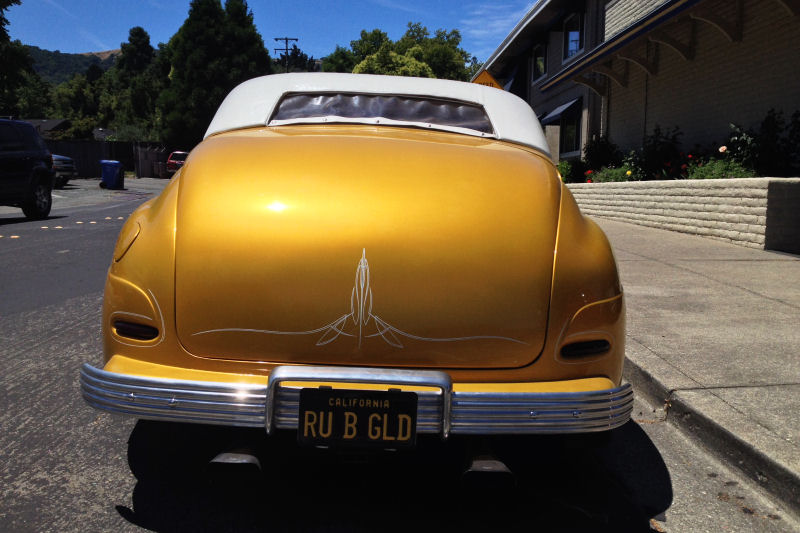 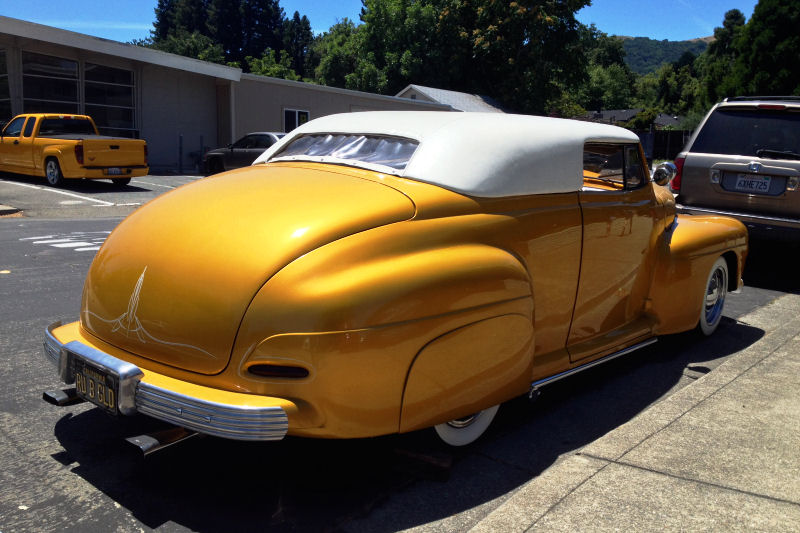 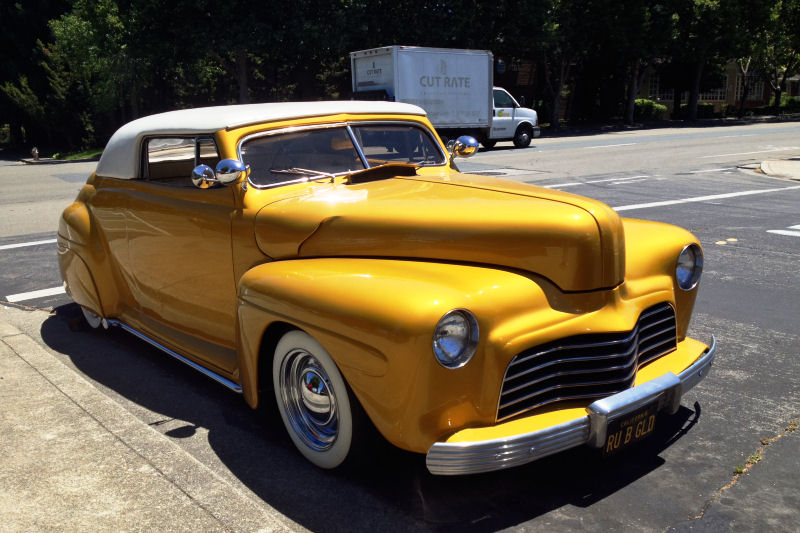 It looks like an older build with a lot of retro "kustom" flavor. There is a lot of metal work evident here. But apparently it's a retro-inspired modern custom job. The biggest clue as to the age of the build is the tape deck in the dash. It is a 1946 Ford body on a modified General Motors A-body chassis, probably sourced from a Chevelle. Power comes from a Chevy 350 V8, a popular hot rod engine choice. The headlights are "frenched" into the fenders and the grille resembles a '46 Chevy unit. I'm more partial to the stock Ford front end, but to each his own. The spot lights and lake pipes are in keeping with the 1950s flavor of the car but apparently are just for show according to the ad. The top is a solid removable piece by Carson, leaving the car as a full roadster with it removed. 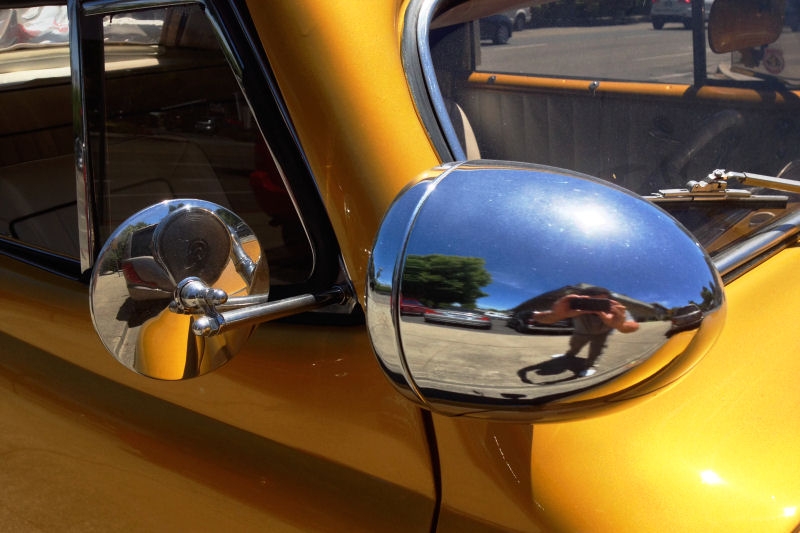 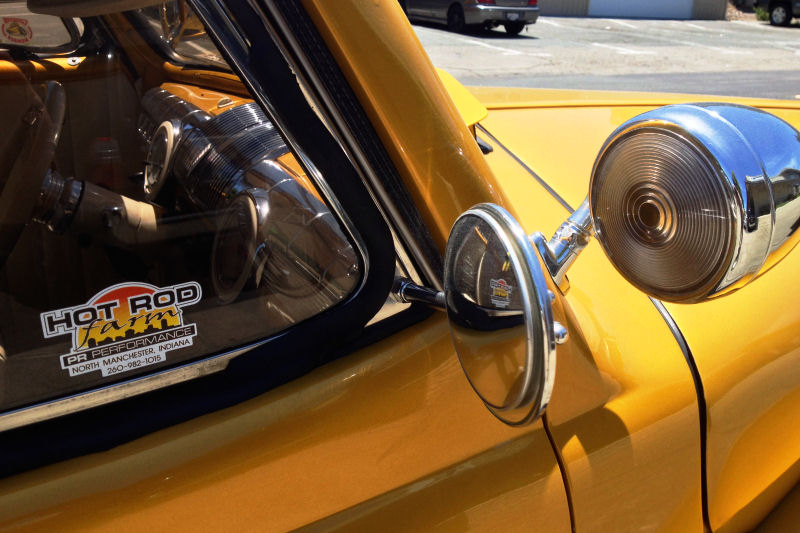 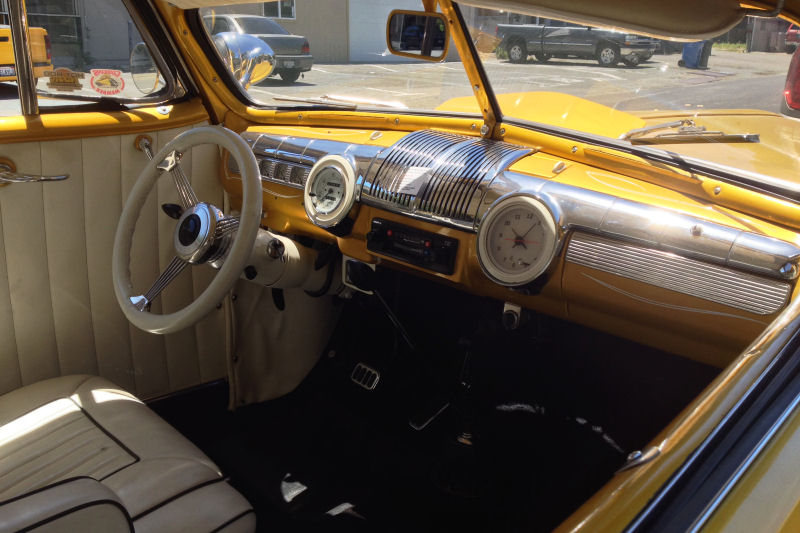 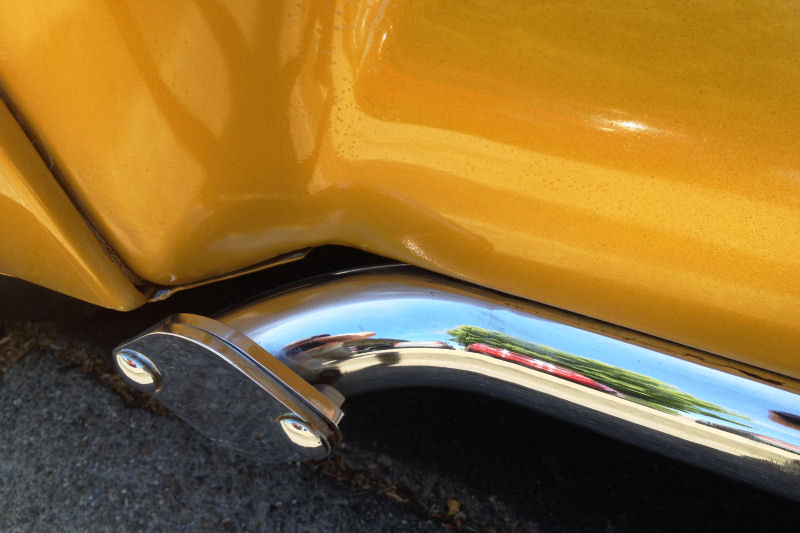 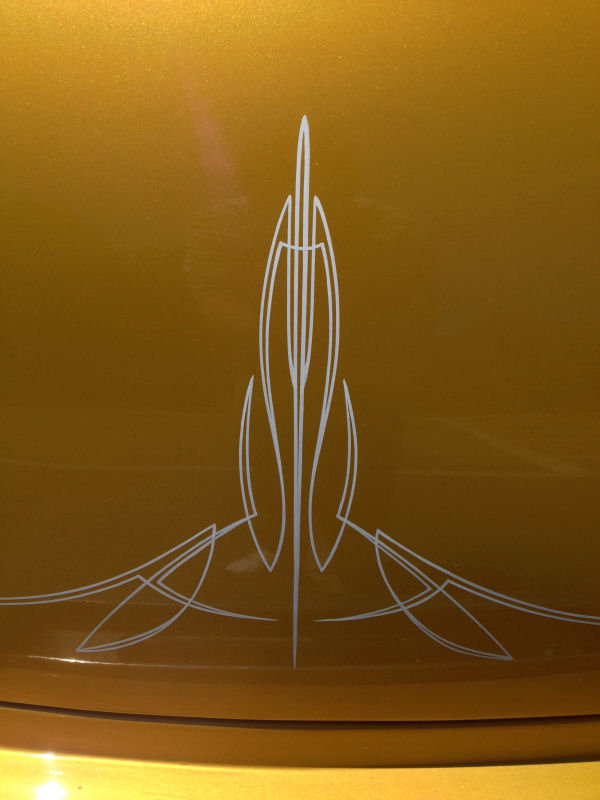 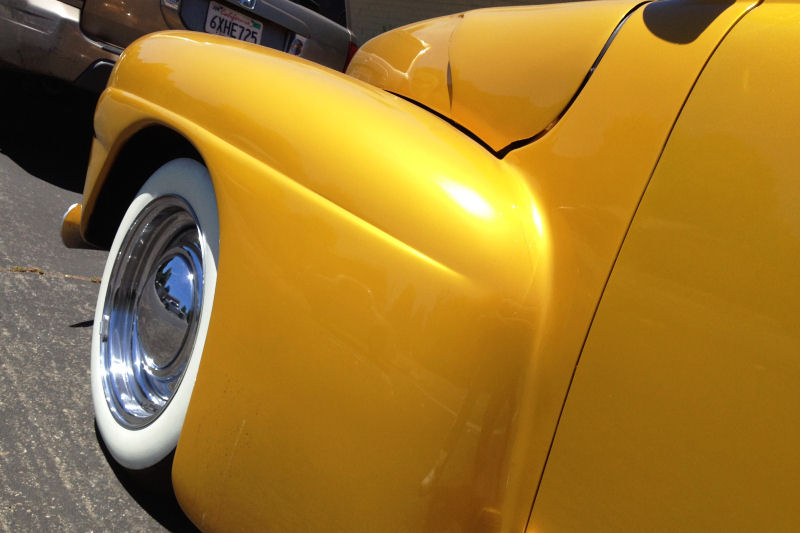 Nearly everything on this car is customized or modified. Even the doors have had their handles filled and replaced with remote "poppers" for a cleaner, smoother appearance. The final result is generally pleasing and a convincing professionally built "kustom". I wish more of it worked -- it would be cool if those pretty chrome spot lamps were real -- but these cars are all about style. And sometimes style is enough.

Photographed June 2016
Posted by Jay Wollenweber at 12:00 AM