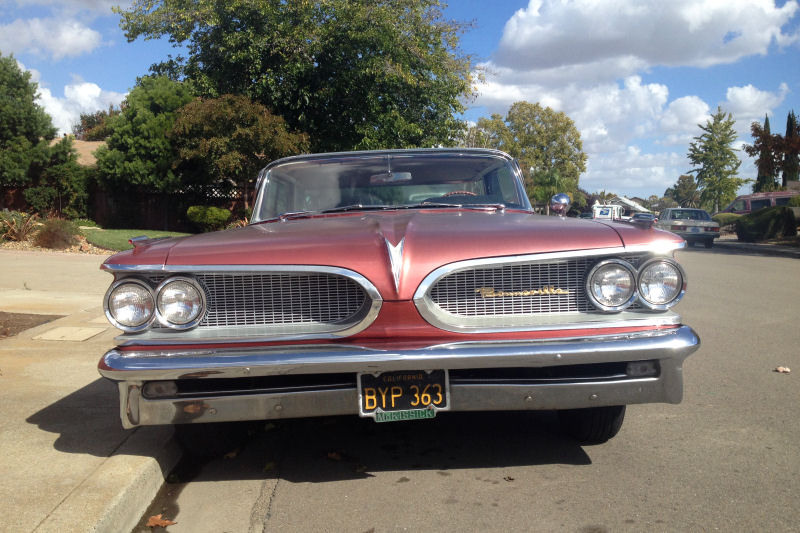 All right, let's end this year on a high note. This was one of my favorite subjects of 2016 and one that I waited nearly three years to shoot. 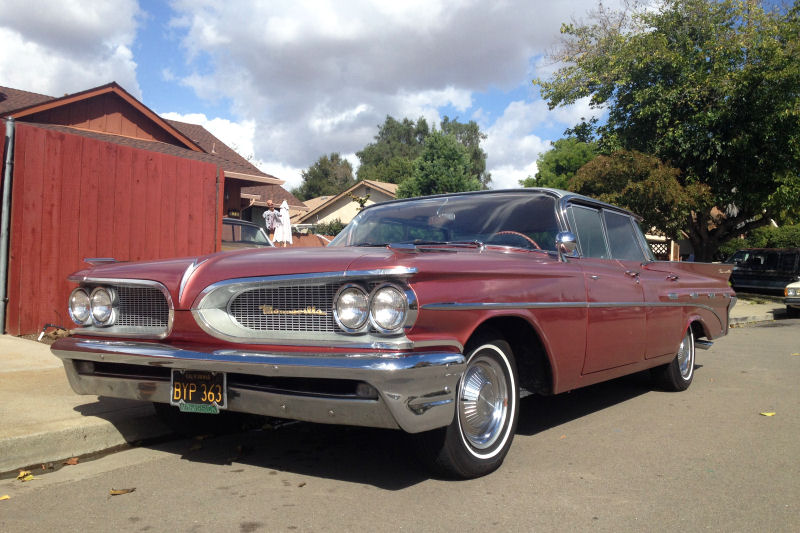 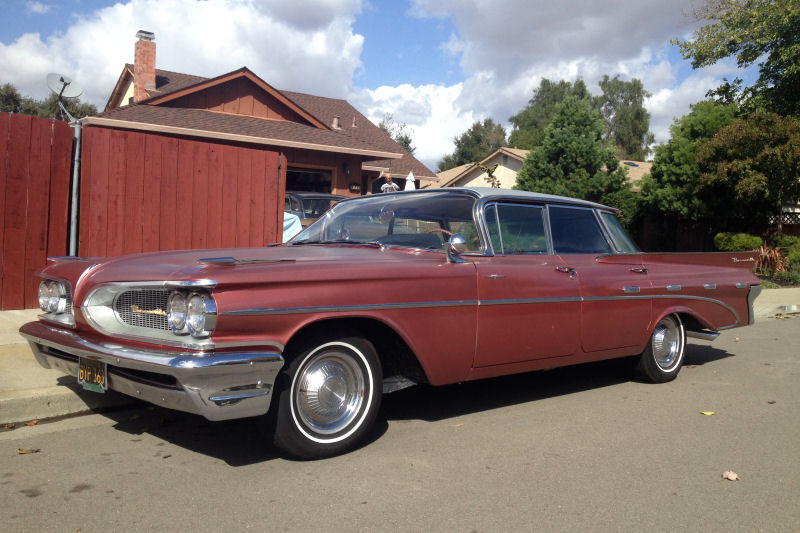 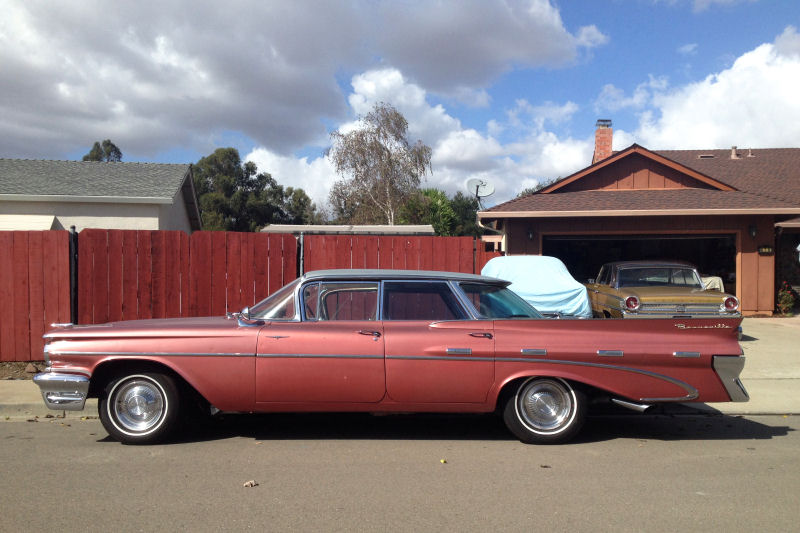 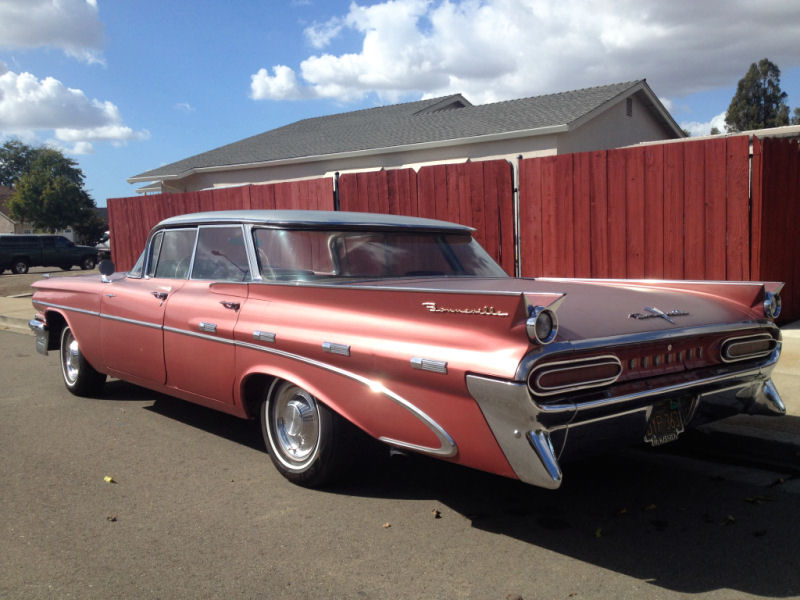 Of all the cars made in 1959, the Wide Track Pontiacs are on my short list. If I had to own two American cars of that vintage I'd probably choose a Pontiac Catalina coupe and an Edsel Ranger sedan. Unusual choices, perhaps, but I like them. Interestingly, the gentleman who owns this car used to also own the 1958 Edsel I featured earlier this year. That car has moved on to a new home, but this magnificent Sunset Glow Pontiac remains. I regret that I had to shoot this car with an iPhone, but my DSLR was at home and the phone was all I had on hand at the time. 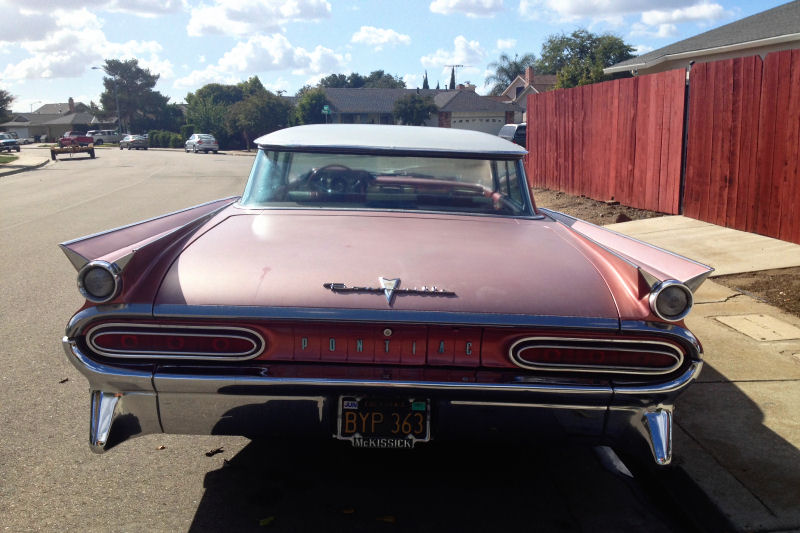 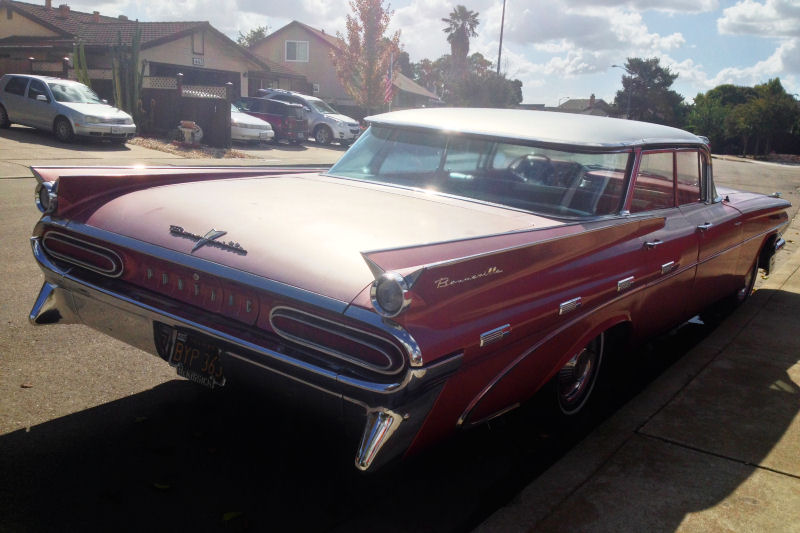 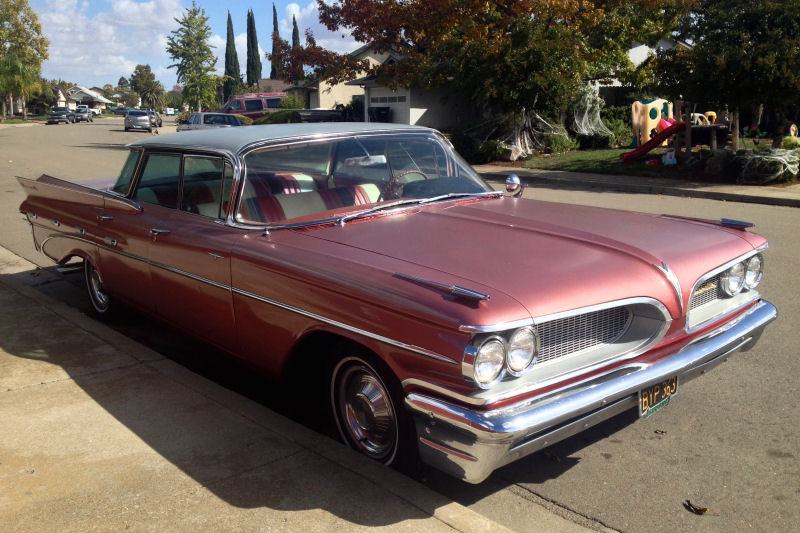 The '59 Pontiacs were special among everything in the GM stable. They were supposed to be the sporty brand, so a new look and a new gimmick were created. The gimmick in question was called Wide Track, and pushed the wheels farther out toward the corners of the car -- five inches wider than before. Most cars of the era had their wheels tucked under the fenders with a large gap between them and the wheel arches. The Pontiac became a much better handling car as a result of Wide Track, and Motor Trend magazine awarded the brand its "Car of the Year" golden calipers. 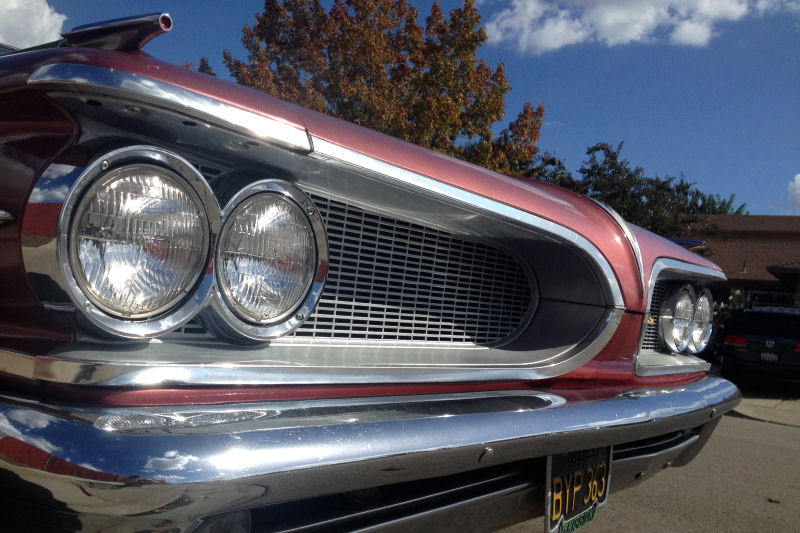 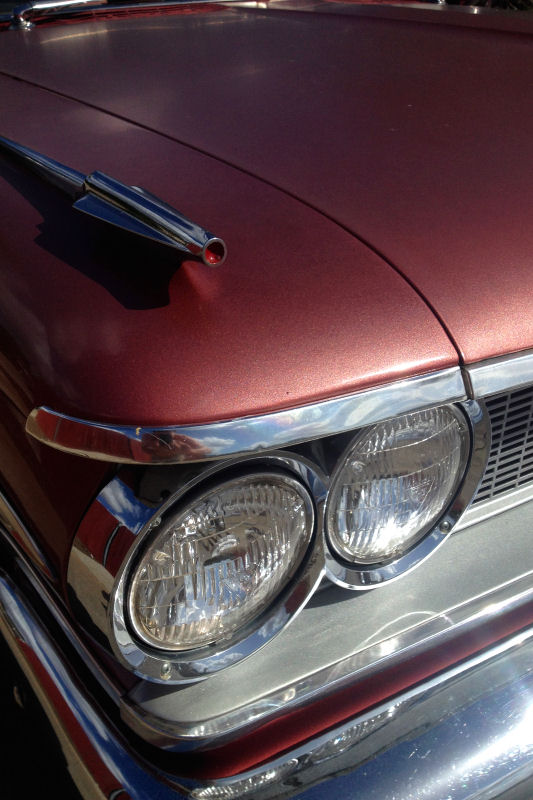 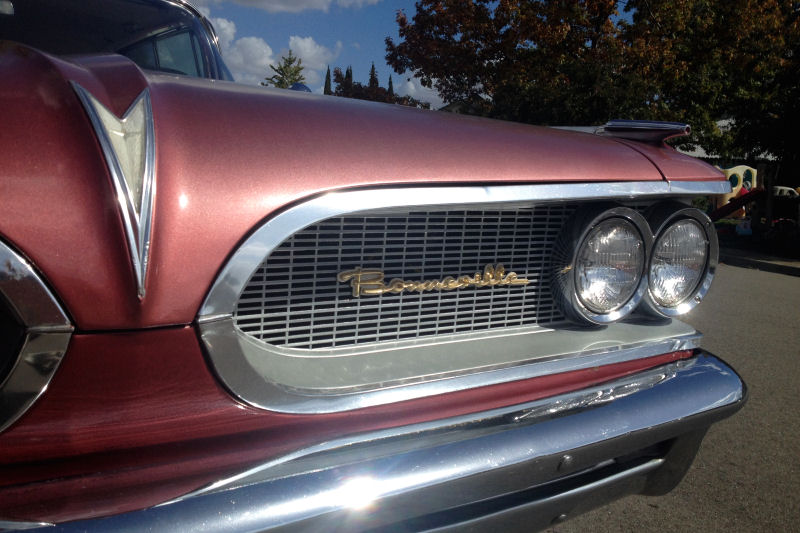 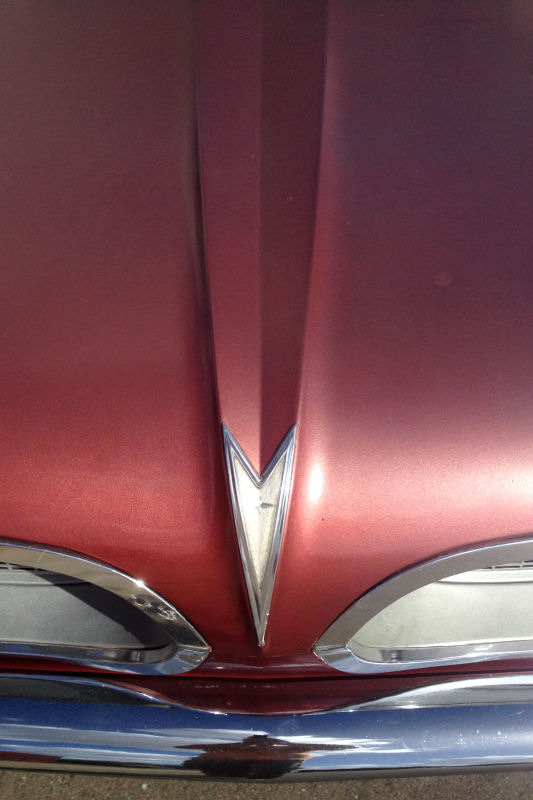 There are three things that I find most striking about the '59 Pontiac. One, the split grille up front. I love it. So did Pontiac buyers. It's a menacing car without being completely psychotic like, say, the '59 Buick. Second, the rear end. This car has four tail fins. Four. Even on the station wagons. Finally, the interior. The upholstery is a striking combination of three colors of "Jeweltone" leather and Morrokide vinyl in bold stripe patterns keyed to compliment the body paint. On this car it's ivory and maroon with a center stripe in mahogany vinyl. 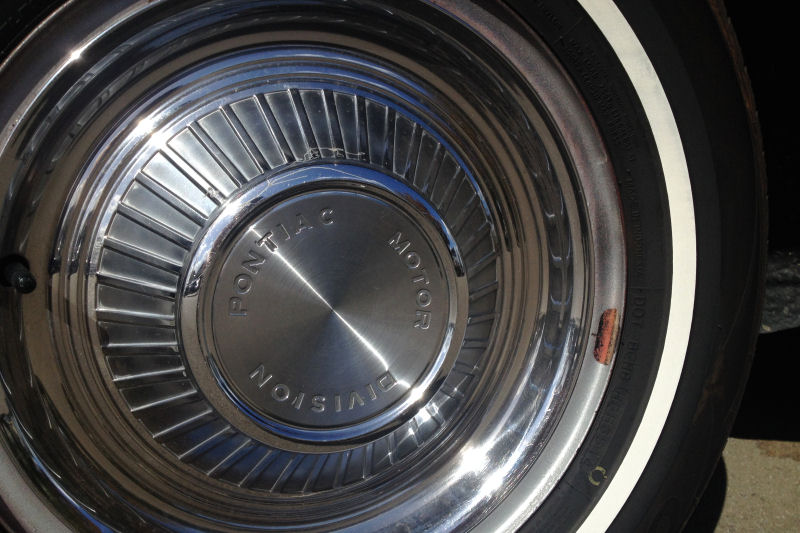 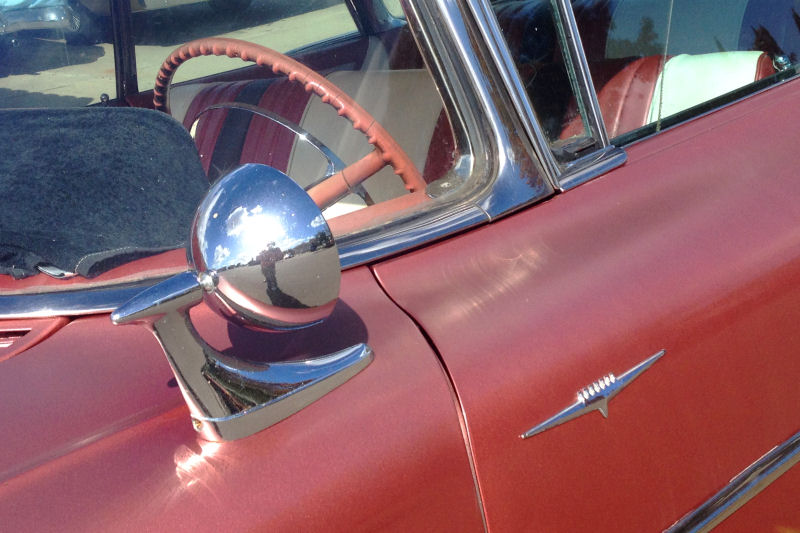 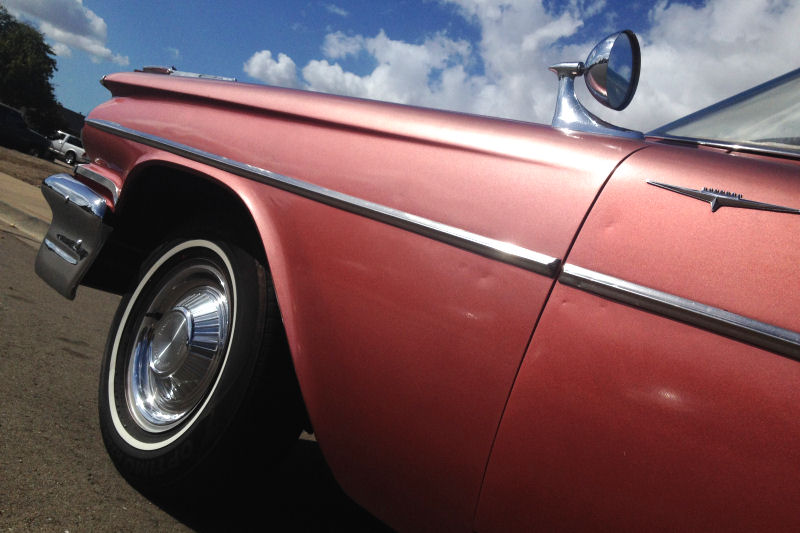 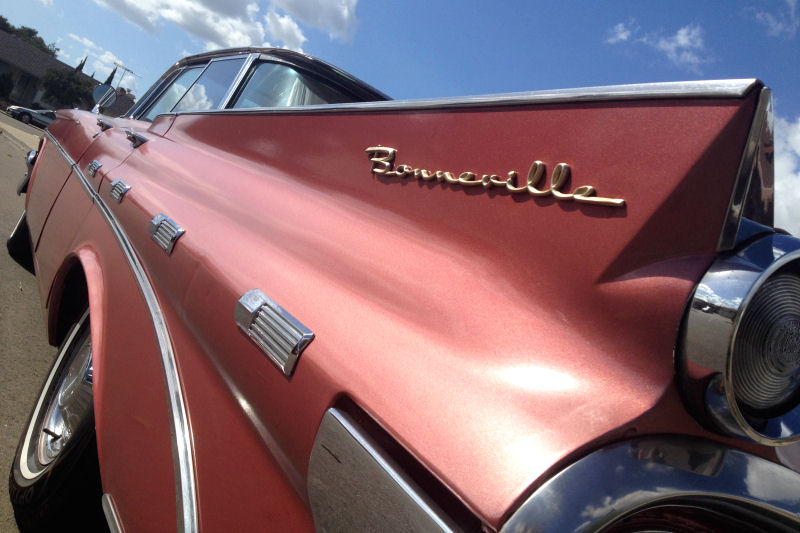 The Bonneville was Pontiac's top model and thus was the fanciest and most powerful. A 389 cubic inch V8 motivates the big car to the tune of up to 300 horsepower and 420 lb ft of torque. Mechanix Illustrated rated such a car at 0-60 mph in 8.2 seconds. That's marginally quicker than my Ford Focus while weighing 1500 lbs more. Granted, that test Pontiac was making more than double the power of my little Ford. Thrift-minded buyers could buy an economy version of the 389 that ran on regular gas. Unlike previous Pontiacs, it appears no six-cylinder was offered. 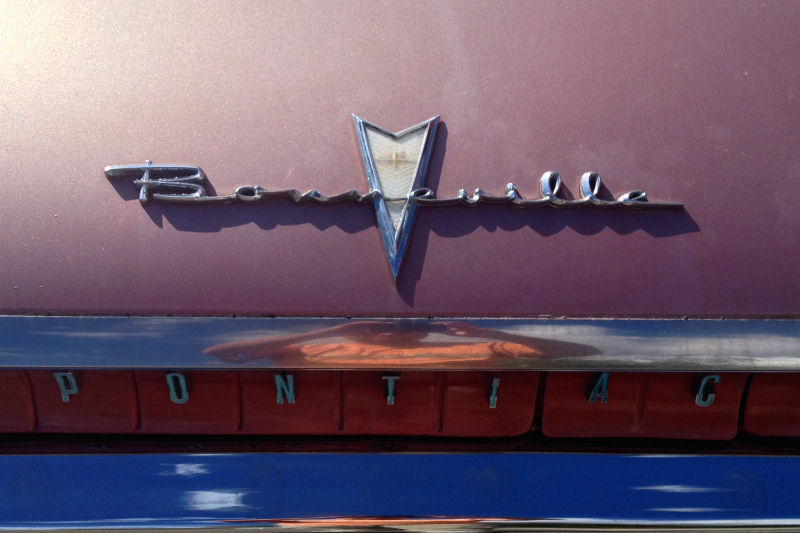 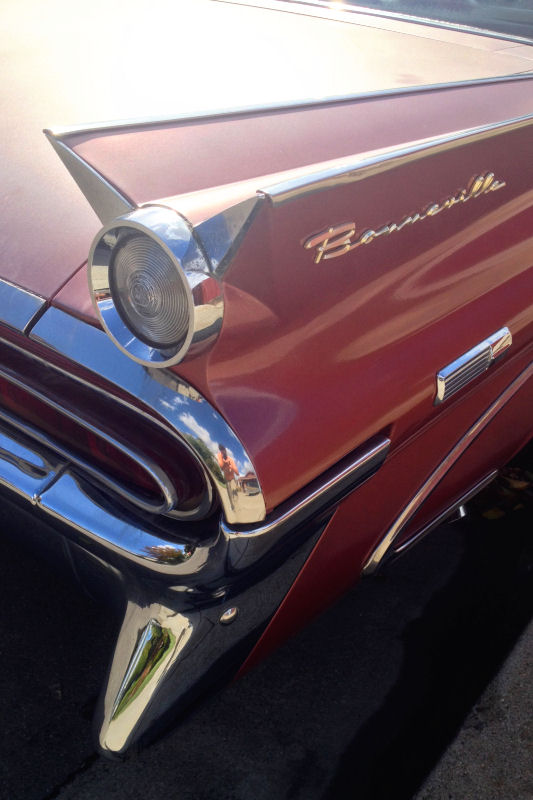 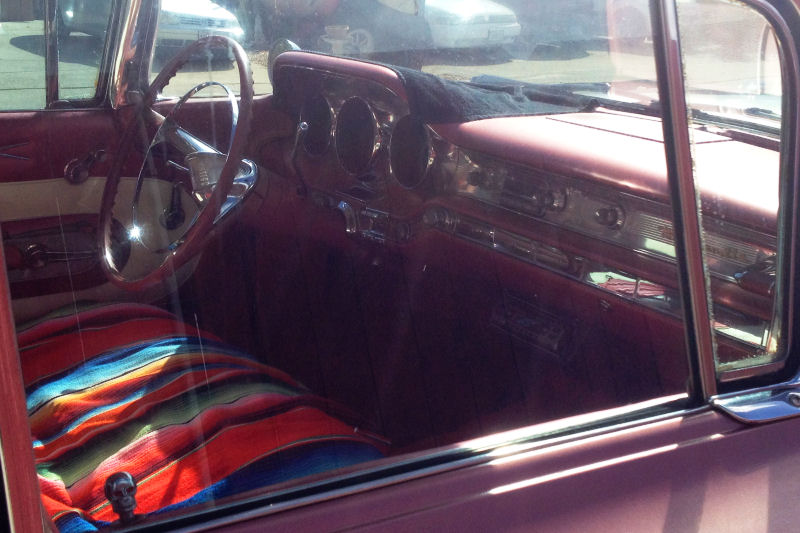 This car looks like it's pretty much stock apart from a couple of small details. There are little chrome skulls on the door locks and chrome dual exhaust tips exiting diagonally behind the rear wheels. Thin whitewall tires get the job done without being too showy. A striped Navajo rug protects the front seat. It's an interesting contrast to the factory upholstery. The body is in great shape for the most part with a number of minor dents but no crash damage that I can see. License plate frames from McKissick Pontiac in San Leandro could be original. It's a completely awesome old tank I'm proud to feature here.
I hope the owner doesn't mind me coming back. His collection consists of several of my favorite cars of the '50s and '60s and I'd love to shoot some more of them.