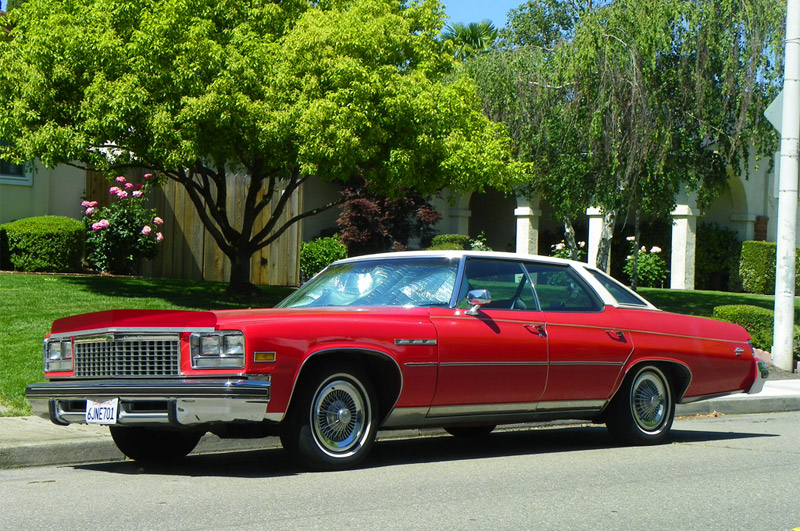 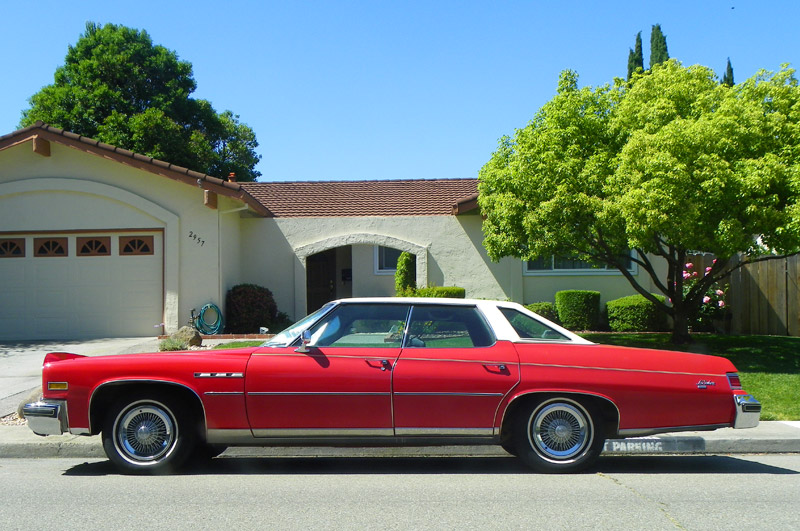 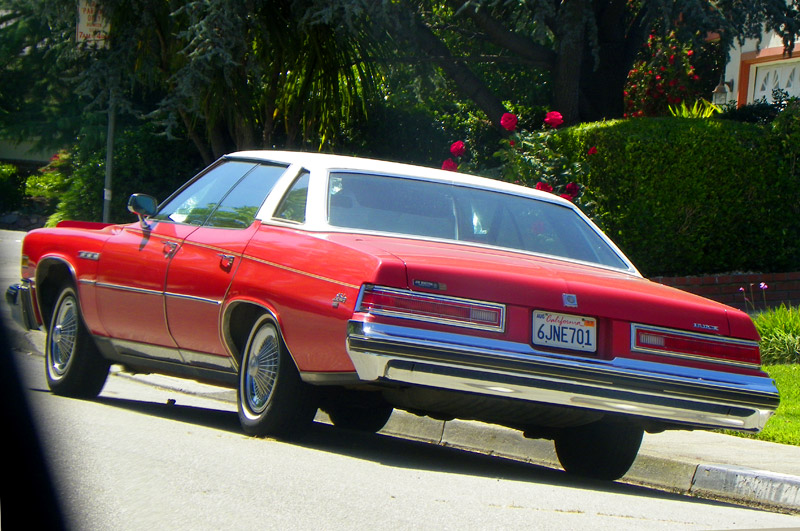 There aren't a whole lot of mid-'70s Buicks around my area anymore. Age and rust (yes, cars can rust here) have killed off many of them, and California emissions testing has probably weeded out more still. To a lesser extent, the 1971-76 GM fullsize cars are popular with the donk crowd that seems to think a car isn't "sick" and unique unless it's jacked up on huge rims with candy paint and a bumping stereo. Is it still unique if it looks just like all your other friends' cars? Anyway, my point is that nice, original 1970s GM B-bodies are getting hard to come by. Buicks, Pontiacs and Oldsmobiles aren't as fashionable with the donk crowd, thankfully, as Chevrolets. Chevy sold well over 400,000 full-size cars in 1976. In 1972 alone, they shifted over 1 million of them. Buick, in comparison, sold 282,000 full-size cars in 1976, the year this car was built. That's including LeSabre, Electra and Estate Wagons, the latter two of which were actually built on the C-platform. Curiously, for 1976 the Estate Wagon was given the front sheetmetal of the smaller (and cheaper) LeSabre. The LeSabre was offered in base or Custom trims, and base models came standard with the now-venerable 3.8 liter Buick V6 engine. It wasn't very popular. The vast majority of LeSabres were Custom trims with a standard 350 V8 or optional gas-sucking big block 455. This one is a four-door hardtop, the most popular body style that year with 46,109 built. 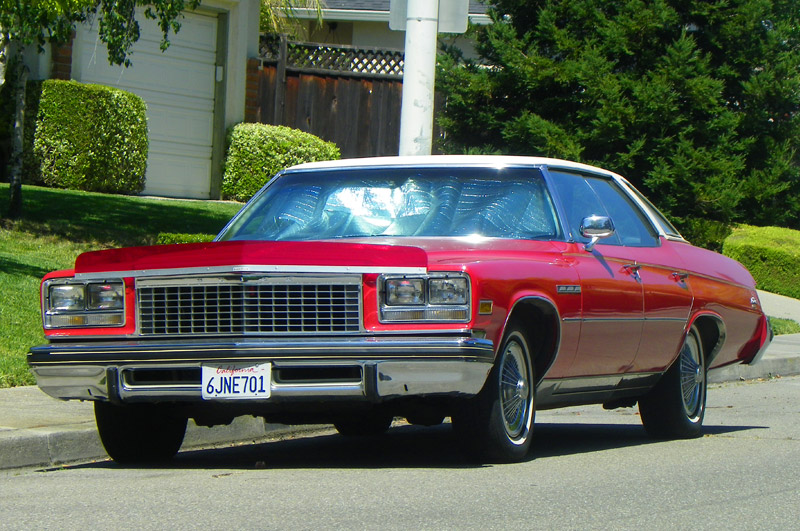 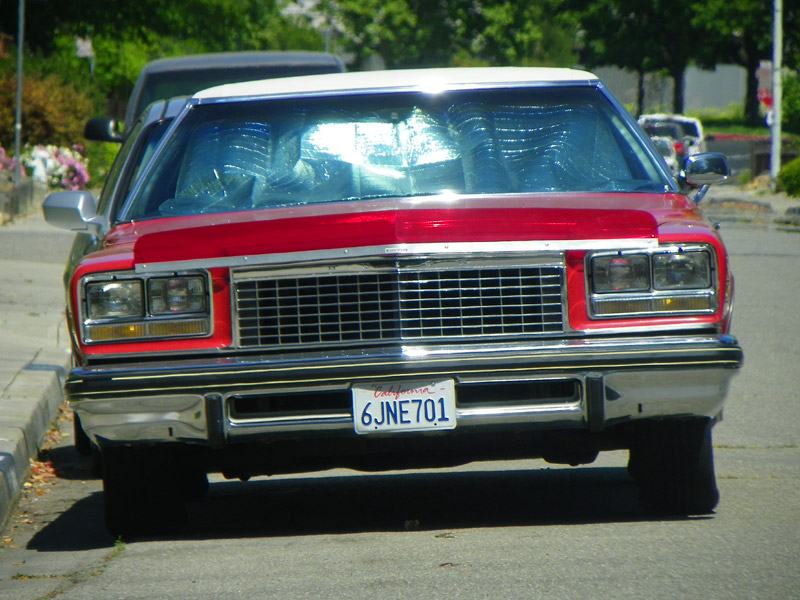 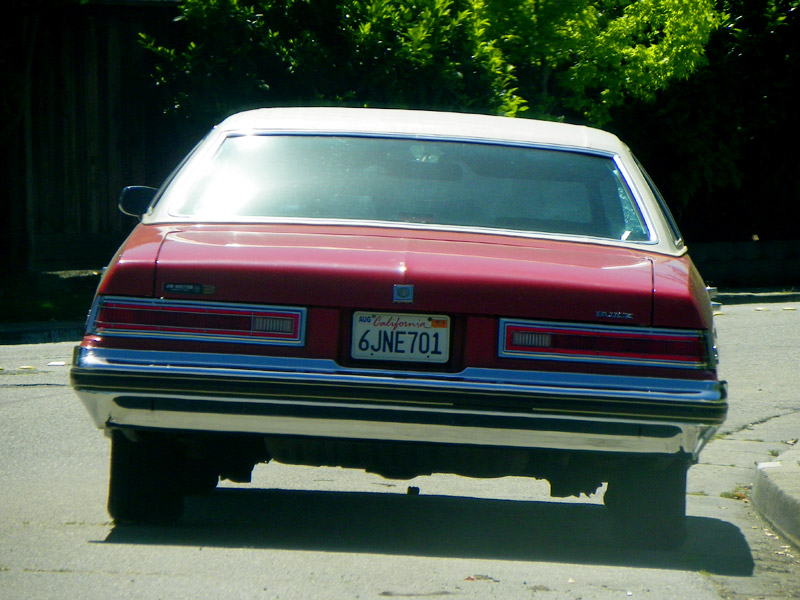 The body on this LeSabre is in really good condition. I'd be hesitant to call it beautiful, but it is a fine example of the breed. (Honestly, I'm not a fan of much of anything GM made in 1976 aside from maybe the trucks. Go ahead and hate me for this, but I like the '76 Pontiac Astre GT.) I'd venture that the nice glossy solid red is a repaint, but it displays great and the off-white double pinstriping and thin whitewall tires lend some class to the car. Likewise, the white vinyl top is an almost uniquely American symbol of luxury, and it looks good here. The only questionable addition is the bug and gravel deflector mounted on the front. If it were mine, I'd most likely remove that if it could be done without damaging the paint. Speaking of paint, it needs the pinstripes continued onto the contours of the hood. Minor things. 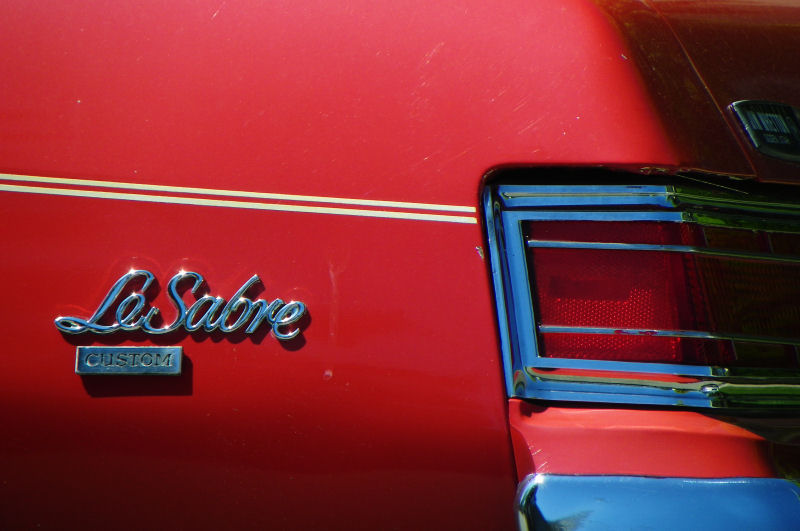 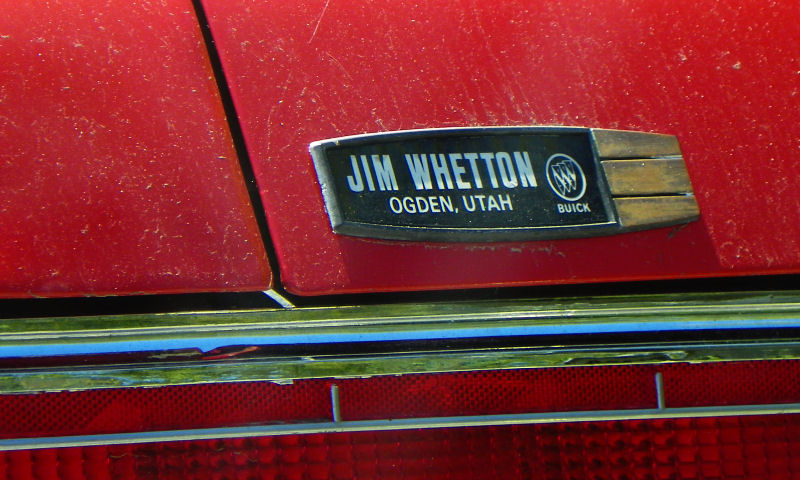 On newer cars, I generally don't like dealer plaques on the trunk lid. On older cars, though, it's a different story. Literally. It tells a story of where the car came from. This one was sold through Jim Whetton Buick in Ogden, Utah. The dealership appears to be gone, but a newspaper article published in 2011 stated that Mr. Whetton was still selling used cars through his son Alan's dealership at 90 years young. Today the old dealership is a detailing shop and U-Haul rental location. Alan Whetton now does business out of Harrisville.
I can tell that the owner cares very much about his big red cruiser, and that's awesome. We need more people in the hobby who appreciate big old cars for what they are, not as a gaudy rolling public nuisance or a shambling beater.
Posted by Jay Wollenweber at 12:00 AM