It's almost hard to believe today in the United States, but decades ago a significant percentage of Mercedes-Benz vehicles sold here ran on diesel fuel. With diesel currently more expensive than premium gasoline in many places now, and Mercedes diesels having helped ruin their own reputation as time progressed, diesel has a long way to go. Even today, in many people's minds there's still a negative stigma of slow, clattering, stinking diesel W123s with the rear end blackened with soot. In today's era of modern clean-running diesels, that's not as much of a problem. They're also inherently more fuel-efficient than many gas-powered engines, so in many cases a diesel can be a smart buy if its fuel economy offsets the increased fuel cost per gallon. 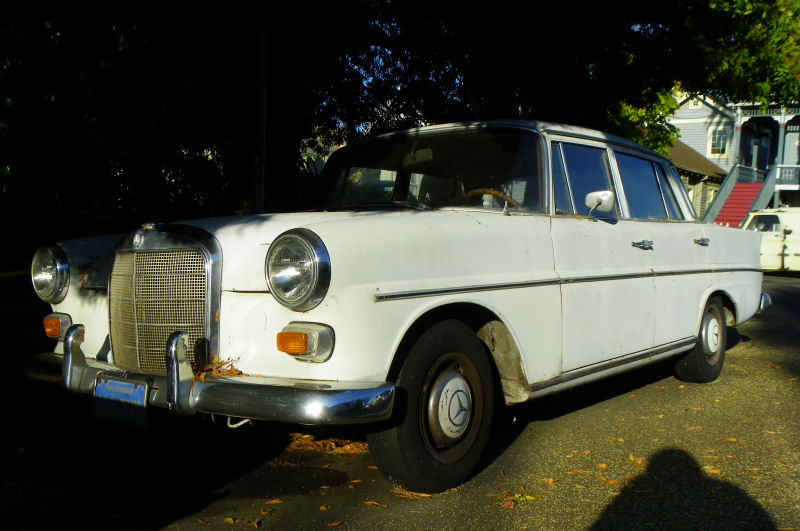 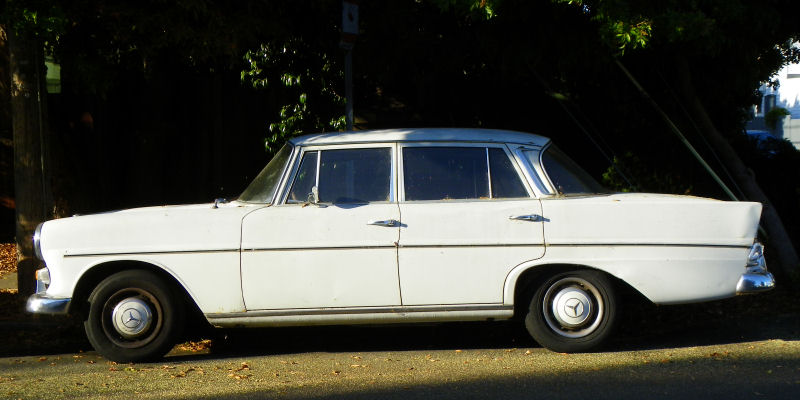 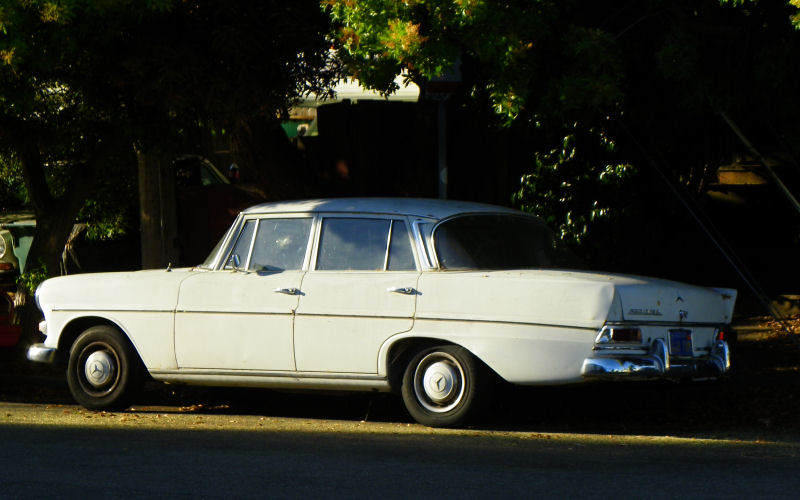 In the 1960s, Mercedes had an interesting marketing scheme going on. After the 1950s Ponton sedans, came the Heckflosse, or Fintail. This series has always confused me because it appears to be two different cars. The cheaper W110 evolved into what is now the E-Class, and the W111/112 became the S-Class. Both cars shared a similar look, though the W111 and W112 line benefited from more powerful engines, more modern technology and nicer interiors. The 111/112 also offered a coupe and convertible variant as well as a longer-wheelbase sedan. The W110 was four-cylinder-only until 1965, when it was finally given a straight six as an option. More than half were built with the four-cylinder diesel engine, probably making up a larger chunk of the European market than in the U.S. 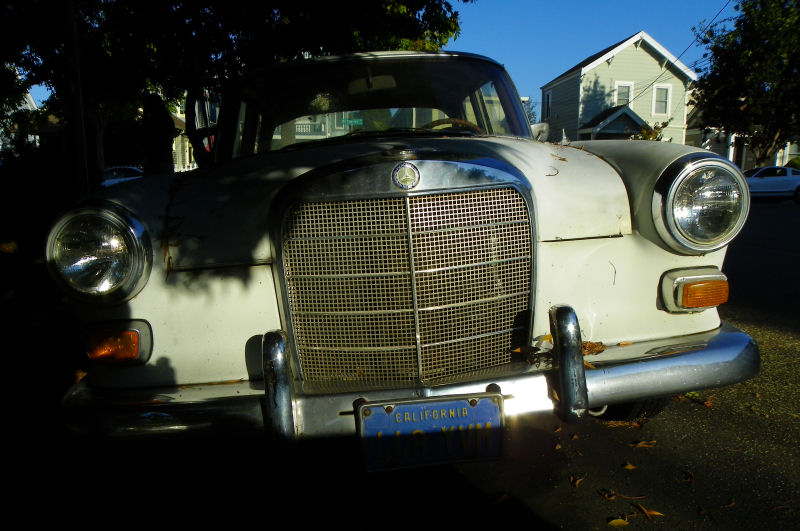 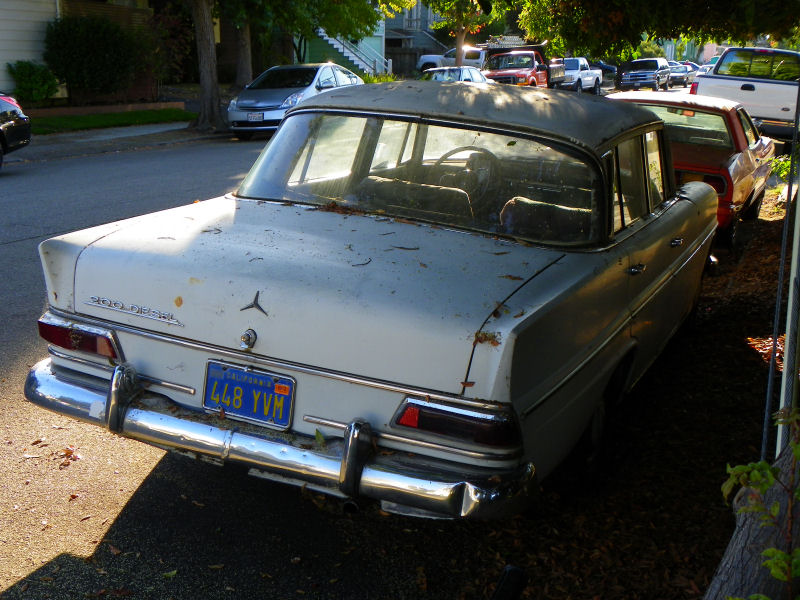 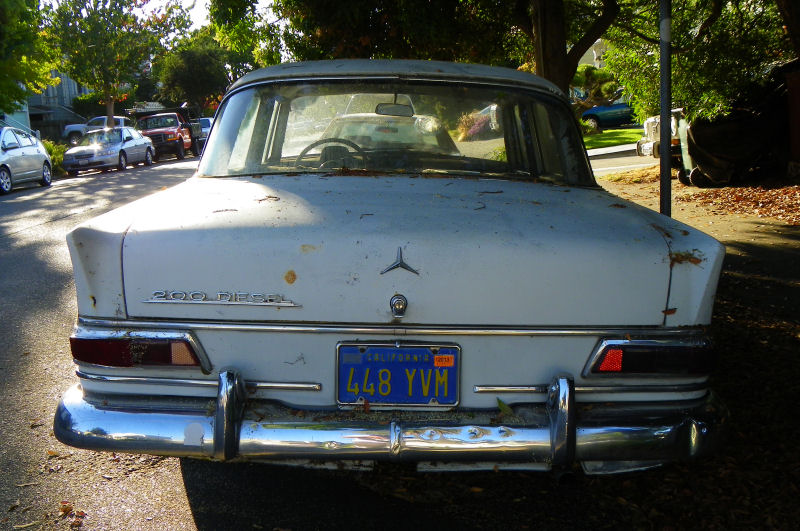 This 200D is a second-series car produced in 1967. At first glance I believed it to be a US-market-only car with sealed-beam headlamps, but it's actually standard for all W110s as far as I can tell. Ritzier 111 and 112 cars had stacked lamps. This particular car is documented on www.smarks.org by a previous owner, who donated it in 1996 to the Volunteers of America in Oakland following extensive (and expensive) repairs. Sometime after that, the old Merc found its way to Alameda where it lives with the 1976 Mustang II I featured a couple months ago. Its condition has deteriorated since then, as it's almost twenty years older and was parked under trees when I found it. The rim of the 3-pointed star on the trunk is gone, the hood ornament is gone, and the left front turn signal has been jerry-rigged with a mismatched replacement. The rear bumper damage and missing hood ornament have been that way since at least the 1990s. There's also a large round hole in the passenger side of the windshield that appears to have been plugged sloppily with some kind of resin. 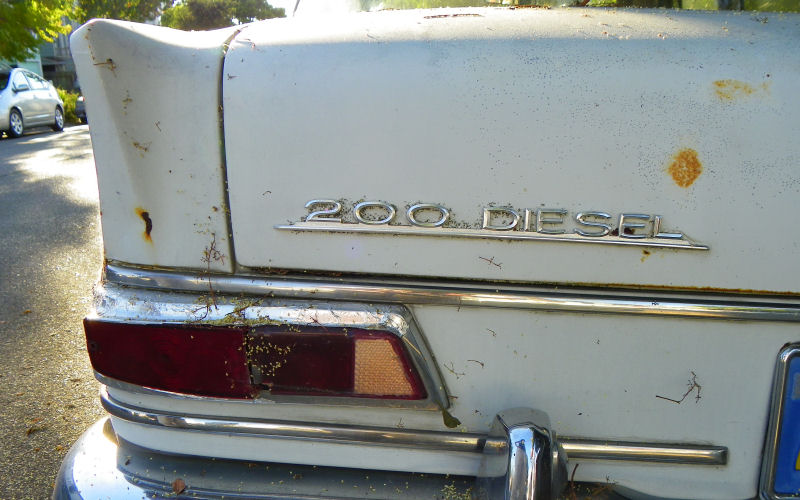 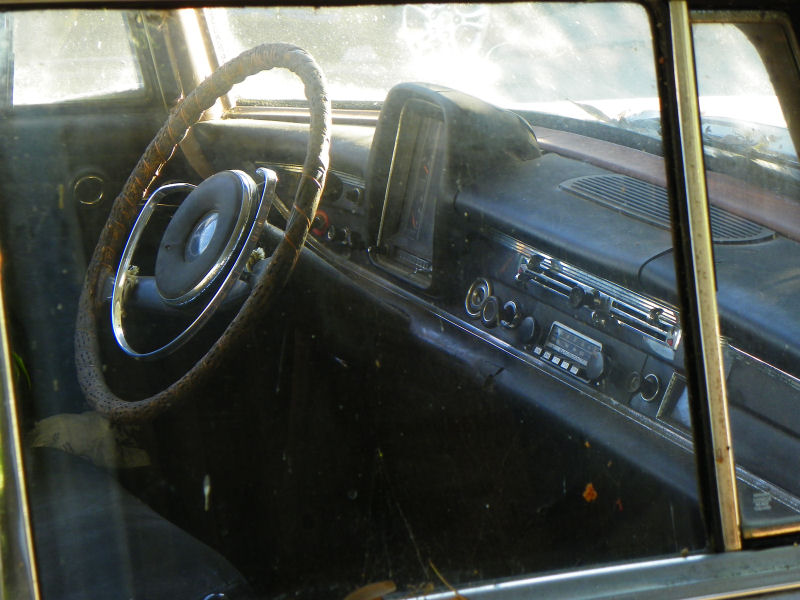 I've always been interested in Fintail Mercedes, more so than most other Benz models because they look like such an anachronism in their own era. It's easy to forget that conservative, innovative Mercedes-Benz still made cars with tail fins even when Detroit gave up on them. This one may be a bit ugly to look at, but it will probably run forever if the owner takes care of it mechanically.
Posted by Jay Wollenweber at 12:00 AM