Cadillacs of the 1950s have always been rather hit-or-miss in my opinion. They're all classics, but not all of them are something I'd want to cruise around in. The early '50s cars in particular have a certain sameness about them that makes me feel ignorant when I have to Google the various model years to tell the difference. Cadillac design really got interesting in 1957, when the fins got bigger to compete with Detroit's other more extroverted offerings. The front end styling was still familiar Cadillac, but aft of the B-pillar everything looked new. The C-pillar was thicker and now reversed, as was the reverse-slanted A-pillar (formerly vertical), giving the greenhouse a crisp, symmetrical look with wraparound windshield and rear window. Out back, the fins have more of a designed-in look that abandons the little P-38 fighter-inspired tail fins that dated back to 1948, and are capped with chrome trim that continues downward to the little blister taillights and exhaust outlets built into the bumper. 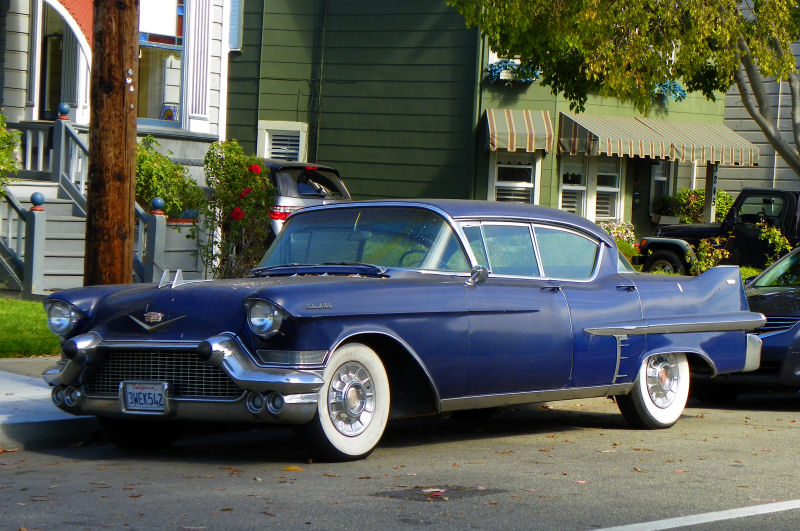 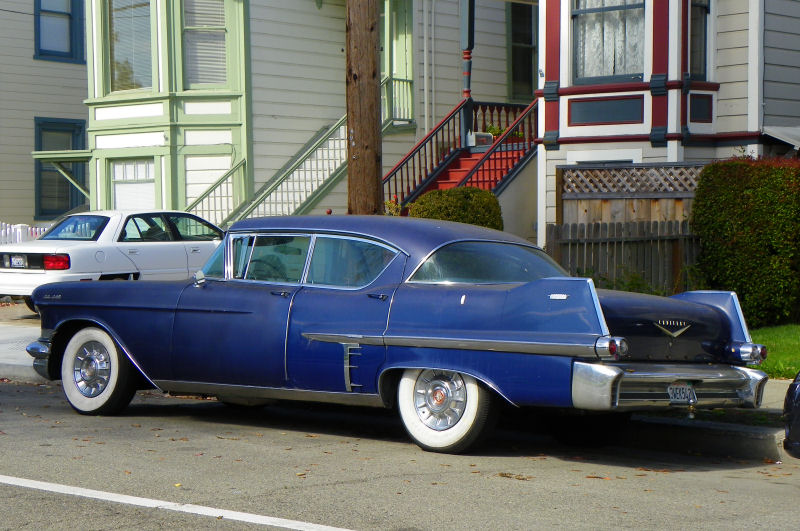 If you didn't like the styling on the Sedan DeVille or upper-class Fleetwood in 1957, you had other options. You could get the Eldorado Brougham, which was absurdly expensive and came with rear suicide doors, a heavily reworked body with four headlights, slimmer taillights integrated into tail fins that jutted outward rather than inward, slimmer rear bumpers and a different greenhouse topped with a stainless steel roof - not to mention one of the most amazing interiors of its day. It was also possible to get the Eldorado coupe and convertible, which had their own unique rear end design with sharply pointed fins protruding from the sloping, rounded rear deck. And if you didn't like that, the Eldorado Seville had no fins at all. 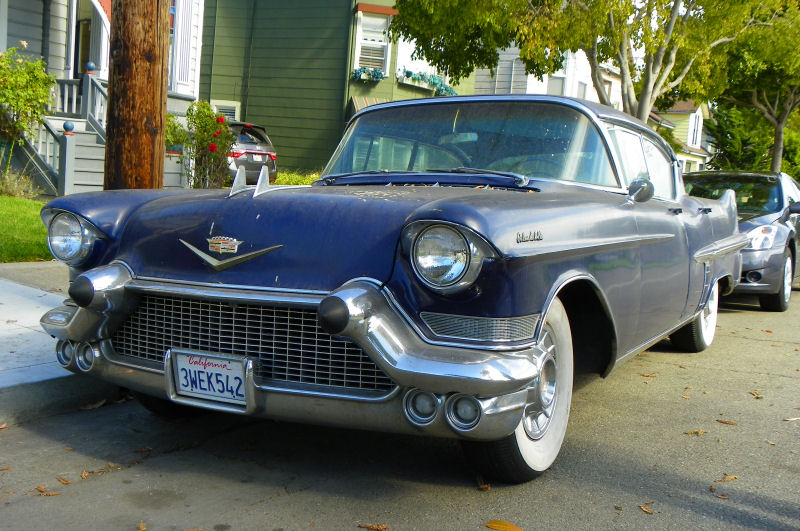 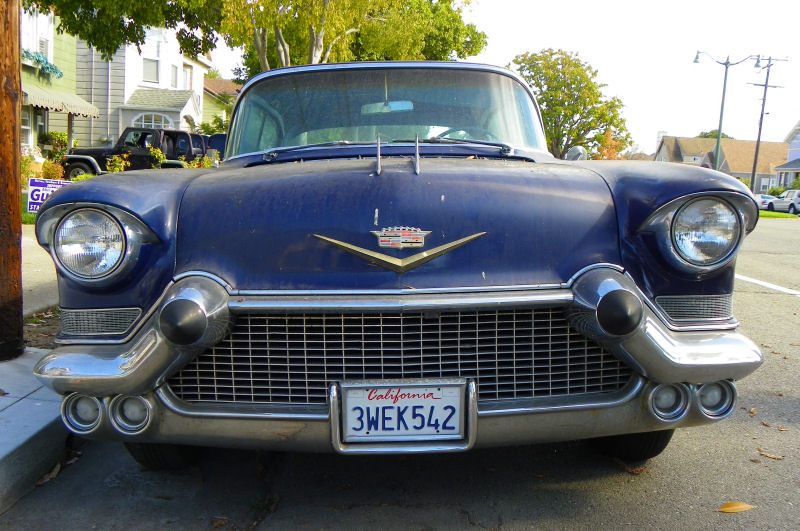 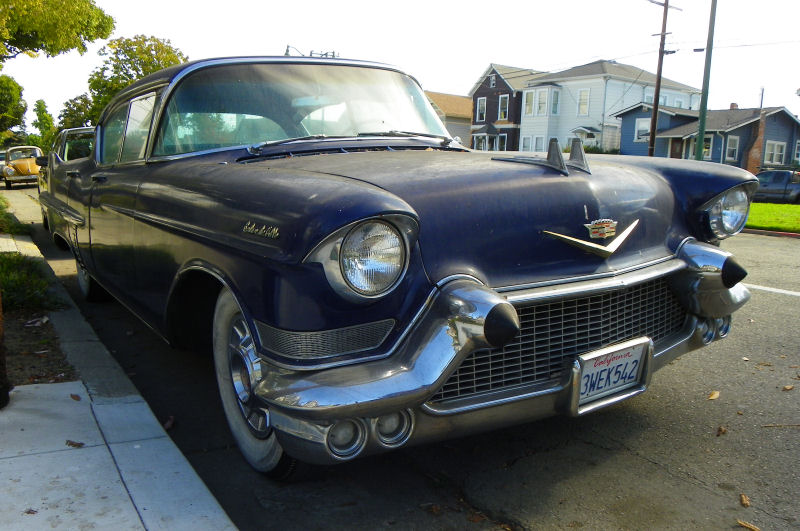 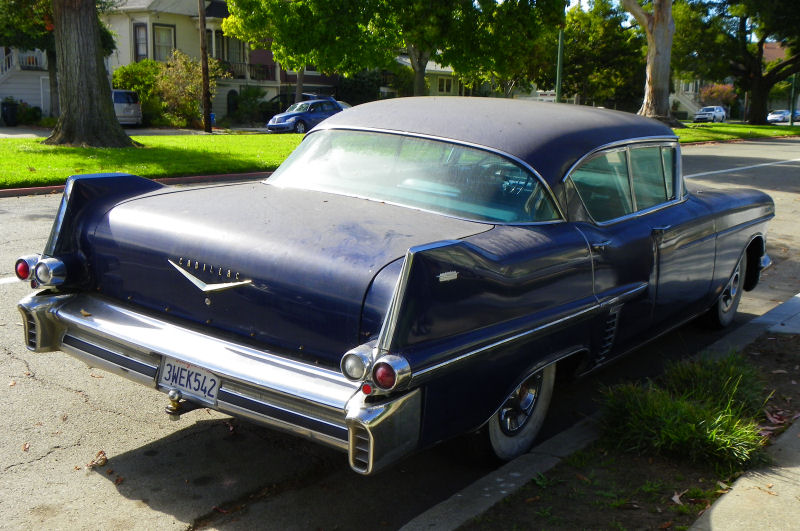 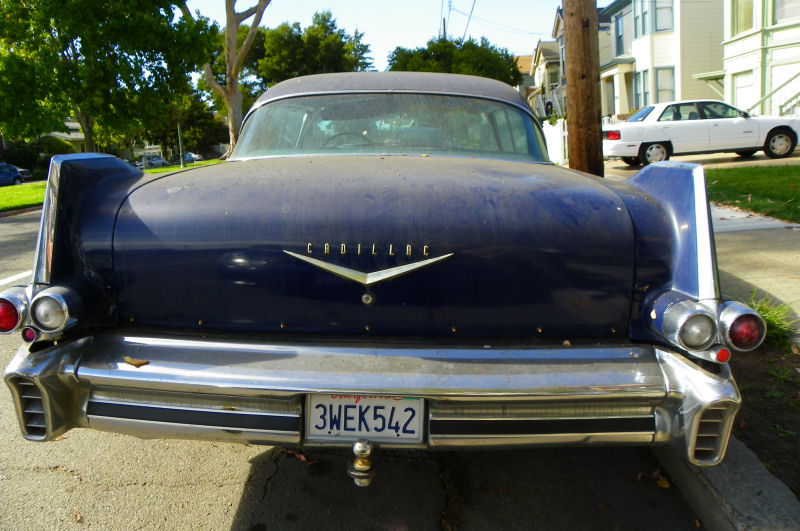 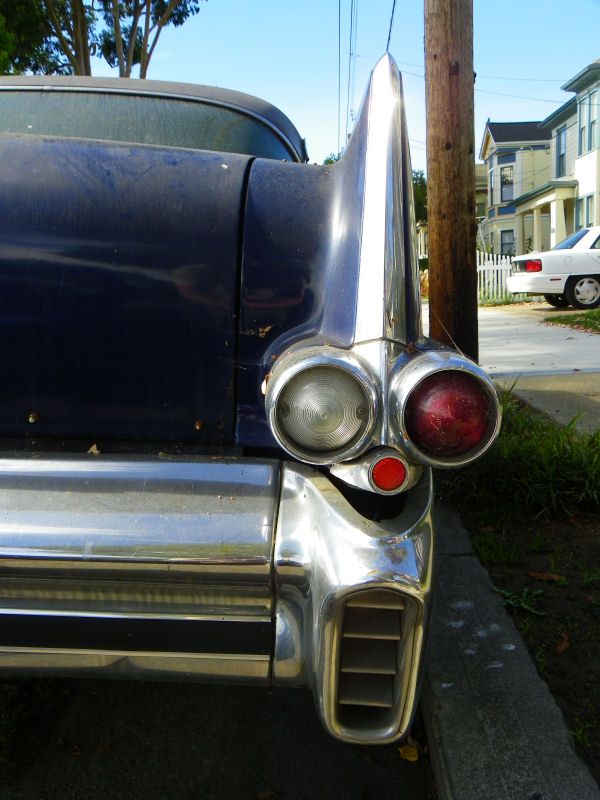 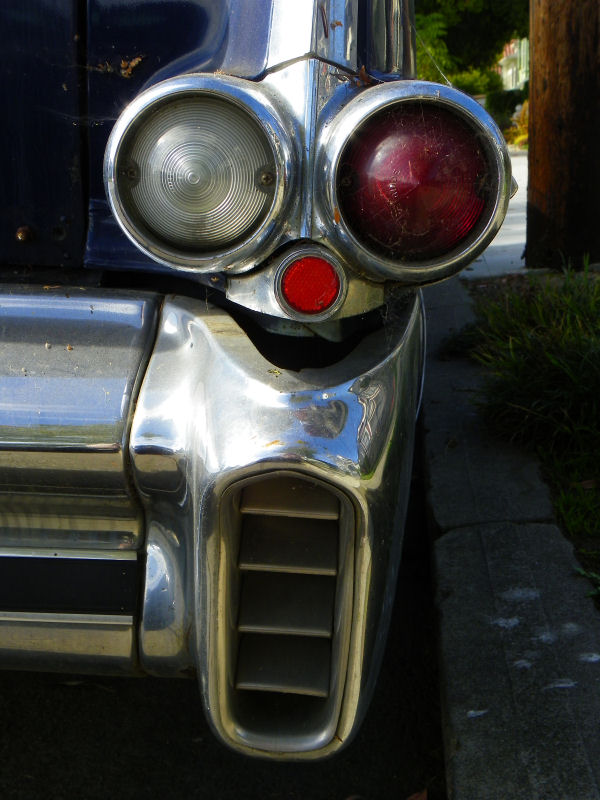 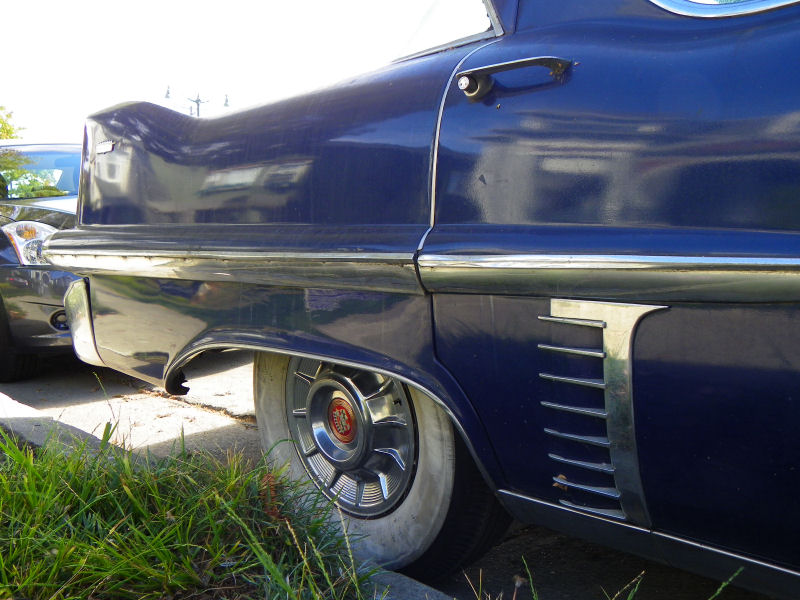 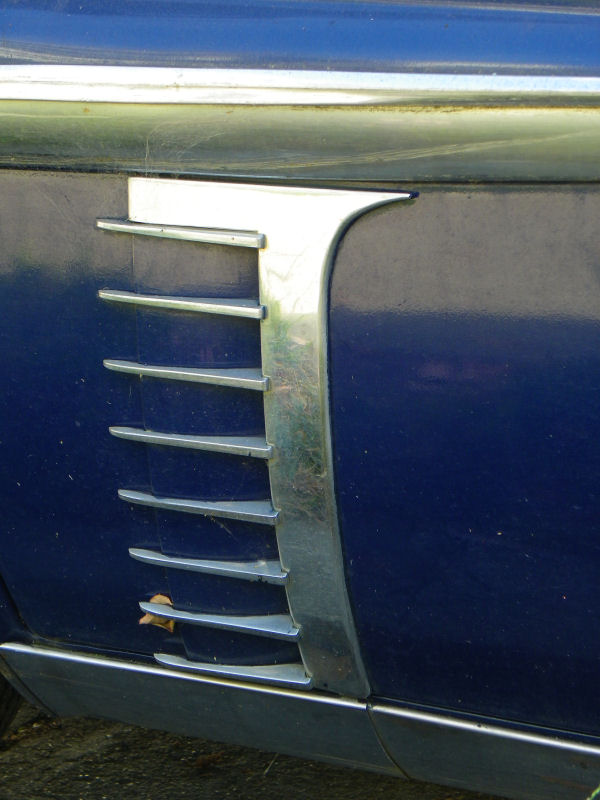 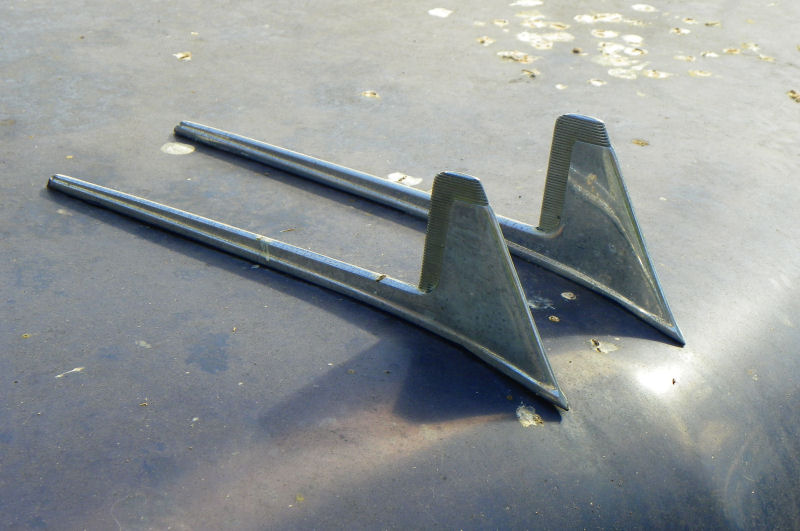 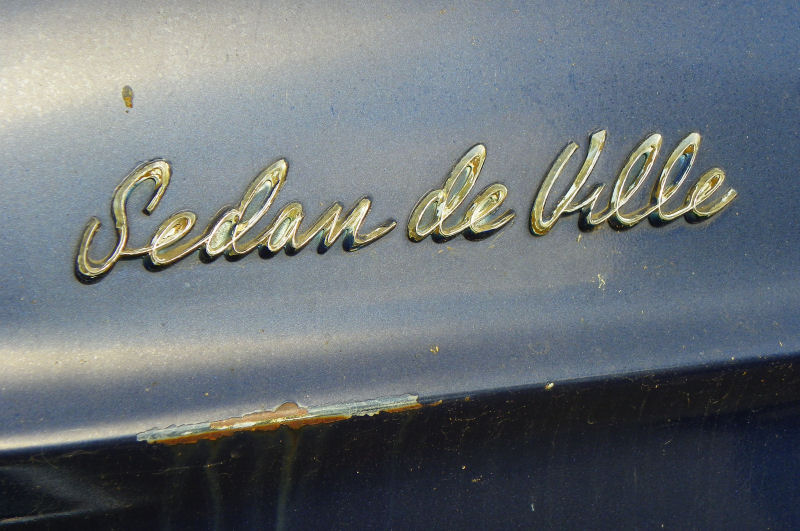 This 1957 Sedan DeVille is a solid example and appears to be almost complete. It's just missing a bit of exterior trim on the trunk lid and left rear passenger door. I've had a soft spot for these cars since I first saw one illustrated in a book of cutaway car drawings back in elementary school, so when I spotted this car while cruising through Alameda I knew I had to photograph it. I'd love to see it cleaned up with the missing parts replaced and painted the same color, which may be factory Cobalt Blue. I love that the owner has kept the original wheelcovers and fat whitewall tires on it. Caddies of this era just don't look right without them.
Posted by Jay Wollenweber at 12:00 AM