I haven't seen many vintage sport-utility type vehicles still being used on a daily basis. Occasionally one comes across an older Jeep CJ, Ford Bronco, K5 Blazer or Toyota FJ40 Land Cruiser. All are recognizable designs and still relatively common. But here's one I don't recall seeing previously, a 1972-73 Jeep Commando. 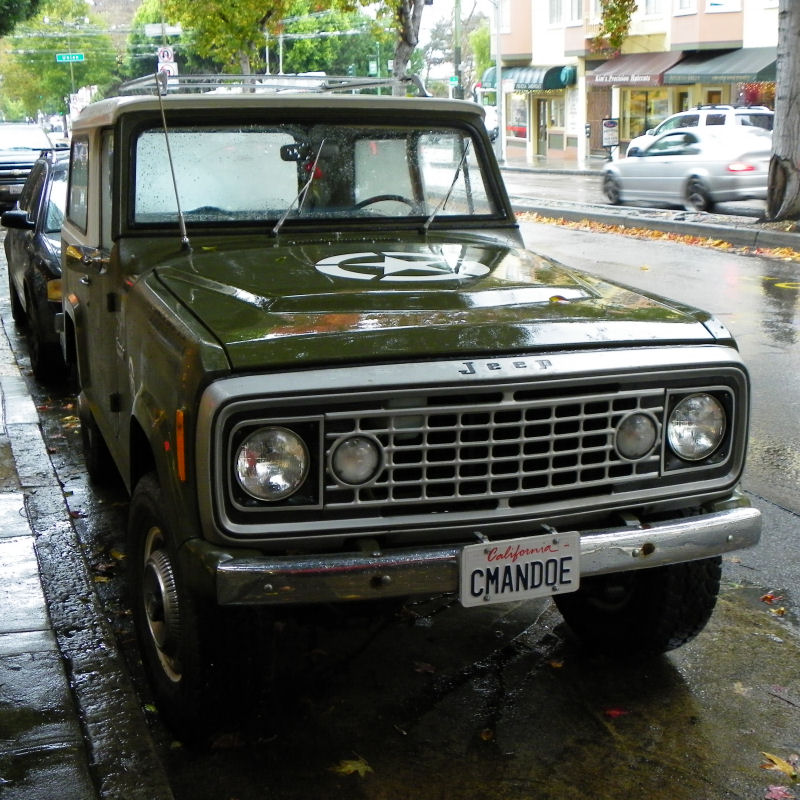 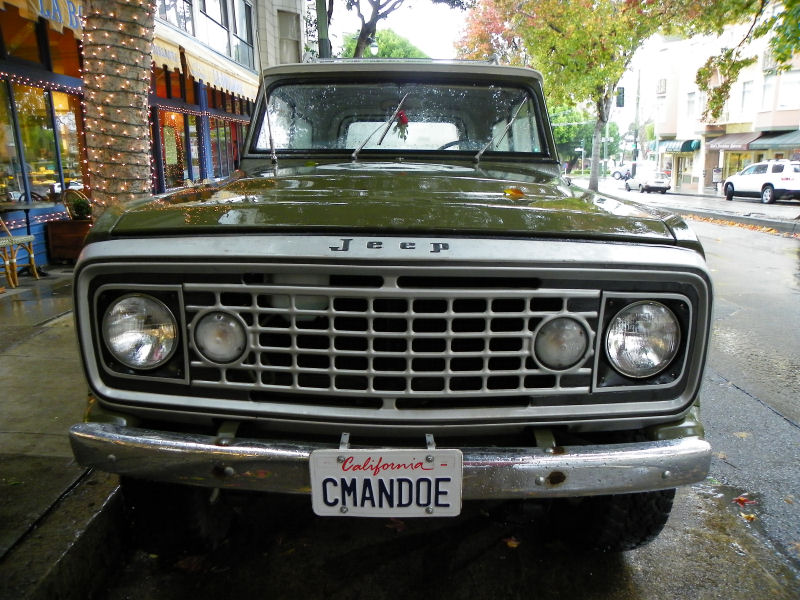 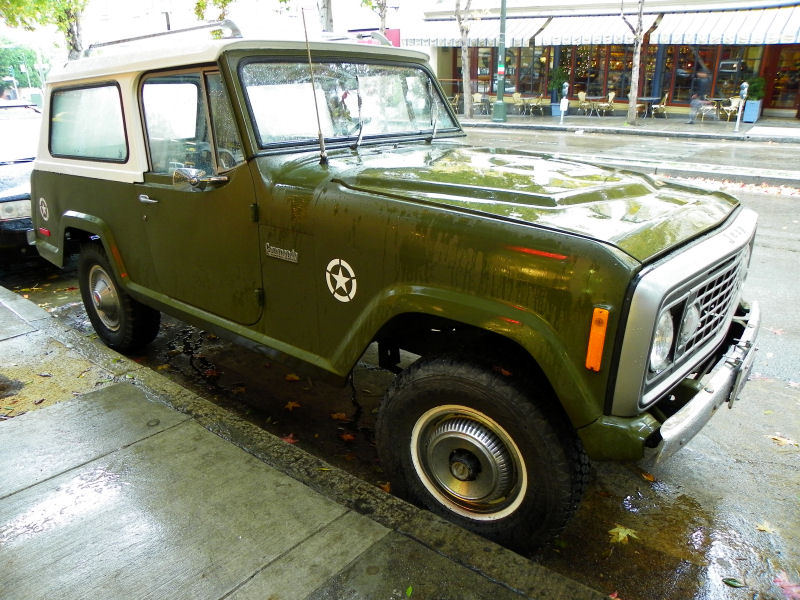 The Jeep Commando began life as the Jeepster. Not the same Willys Jeepster of the late 1940s, but a similar formula that was large and tough enough to compete in the new personal 4-wheel-drive market. The front end styling began as typical corporate Jeep, with the familiar seven vertical grille slots and round headlights inboard from the wide front fenders. The Commando could be had as a pickup truck, convertible or "station wagon", all using the same basic body. All roofs were removable, giving some flexibility among the different models. If you went whole hog with the convertible's options list, you could get two-tone paint, full hubcaps and a continental spare tire on the back. No matter what options you chose, the interior was fairly basic, though some nicer touches like a center console were available. Power came from the antiquated and anemic Willys Hurricane four-cylinder or a Buick-designed V6. This formula worked for a while, then in 1970, things changed. Kaiser-Jeep became Jeep Corporation, purchased by American Motors (AMC). The market had also changed, with the introduction of the full-size Chevy K5 Blazer and GMC Jimmy, and the second-generation International Scout.
In 1972 the Commando lost its cutesy-sounding Jeepster prefix and became simply the Jeep Commando. It also gained a series of AMC-built engines including the 304 cubic inch V8. The AMC engines required a longer wheelbase, so it was a good reason to update the front end styling. The blocky facelift made the Jeep look more modern, while at the same time sacrificing the traditional styling that made it so instantly recognizable as a Jeep. A little over 20,000 Commandos were built between 1972 and 1973, when the Commando would be dropped in favor of the (in my opinion vastly better looking) 1974 Cherokee. 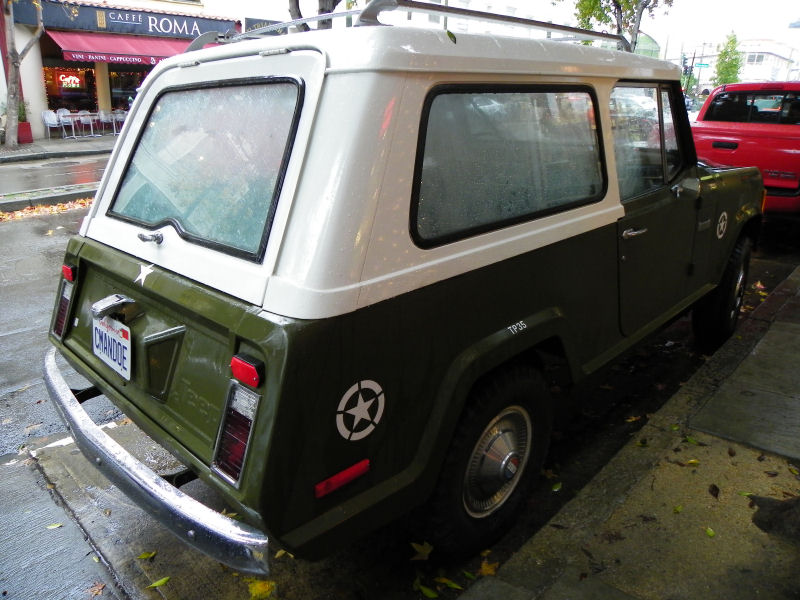 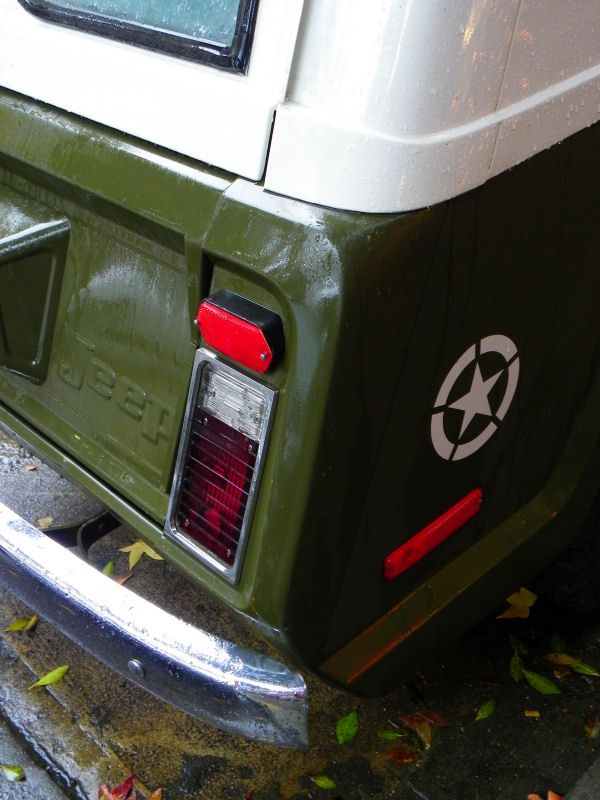 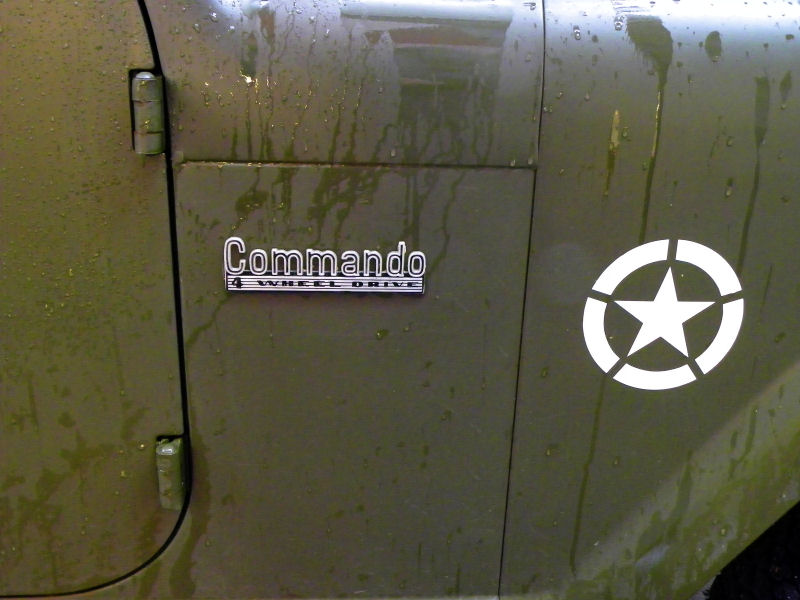 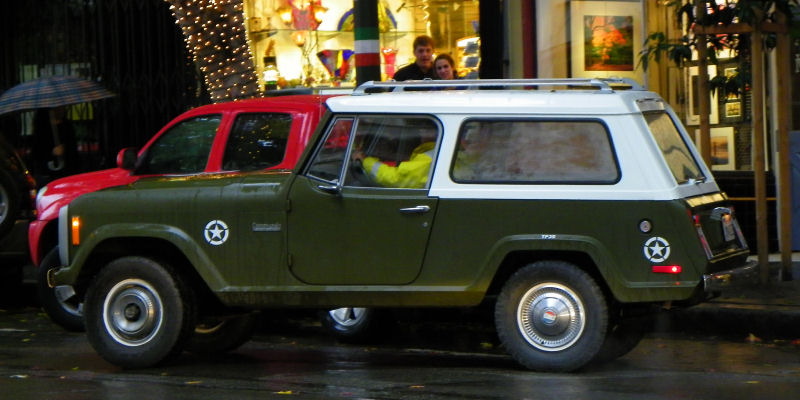 This little sport-ute honestly had me guessing when I happened upon it front-first while hurrying to meet a friend on a rainy day. It said Jeep on the front, but it didn't look like a Jeep. Despite the helpful license plate with its phonetic spelling of "Commando", I didn't initially know what model it was. I walked around to the side and there was the "Commando 4 Wheel Drive" badge. The owner has painted this one with a pseudo-military scheme, in plain gloss olive green with stenciled stars and number on the rear wheel arch apparently symbolizing ...tire pressure? I don't know how much I like the stenciled bits, but I do think the big "Jeep" name stamped in the rear panel is pretty cool. In my usual fashion, I prefer to get a driver-side profile shot of every feature car I photograph, because it looks nice when I compile all the features into one post which contains thumbnails and links to all of them (as I did with my "100 Street Sightings" post). In this case, that required crossing the wide and busy Columbus Avenue. By the time I got there, the owner had evidently finished his business in whatever establishment he was in and had gotten in the truck to leave. So the closest thing to a profile shot I could get was the vehicle in the process of pulling out into traffic. At least it was stationary at the time...
Posted by Jay Wollenweber at 9:57 PM