Second in this week's Alfa series is a 1967 Spider. Normally I resist photographing Alfa Spiders unless they're something really special. Most are the common 1980s models that are usually beaten half to death and look like something from a Top Gear Cheap Car Challenge. And if they aren't, I just don't bother looking twice. Don't get me wrong, they're undoubtedly fun little enthusiast cars. So is a Miata, and I don't normally photograph those either. 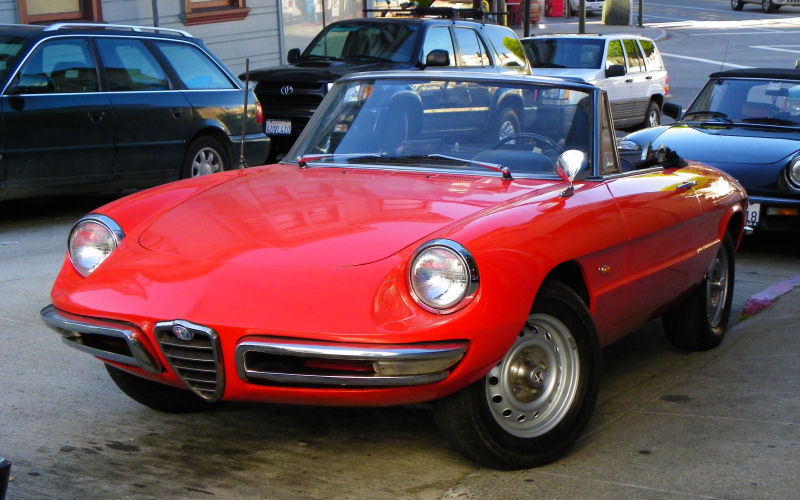 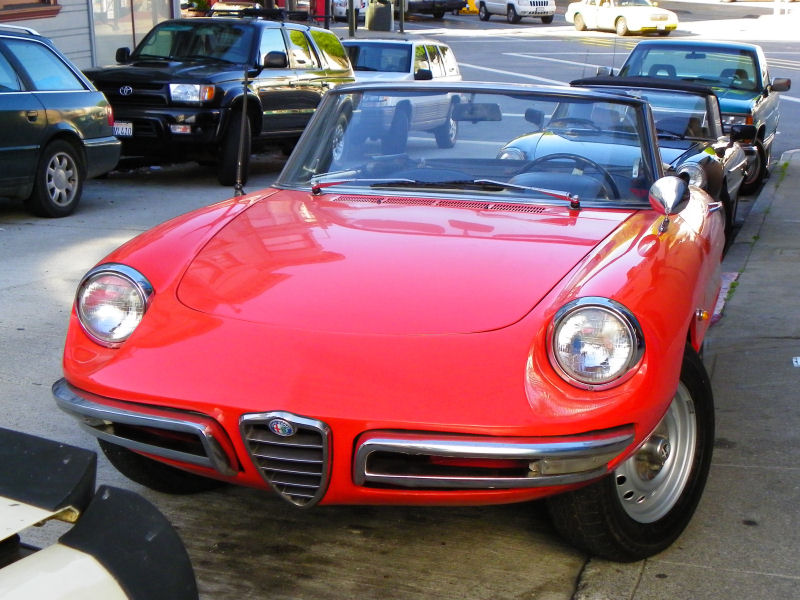 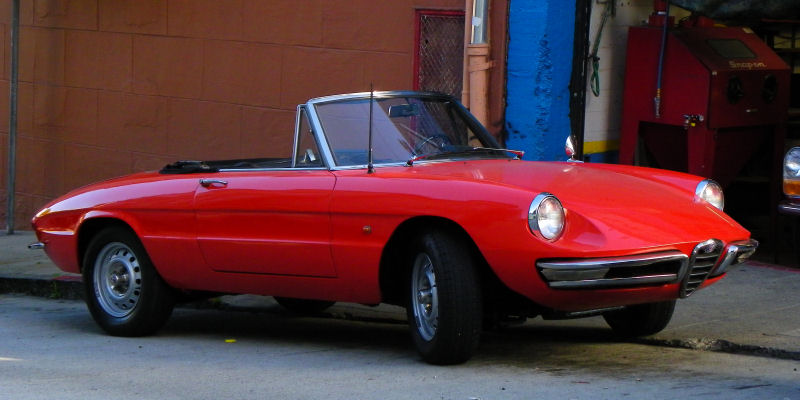 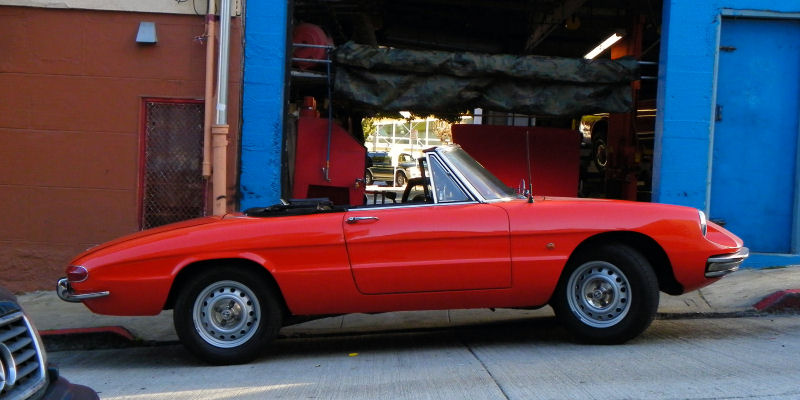 This, however, is another story. Hailing from the short-lived "Duetto" era, this is the Alfa Spider in its purest form. Designed by Pininfarina (literally, it was the last design penned by Battista "Pinin" Farina), it features the distinctive early rounded, tapering rear end and dainty little chrome bumpers. Compare it with the much newer Spider Veloces parked in front and behind, with their chopped-off Kamm tail and huge rubber bumpers and tacked-on plastic spoiler. This is straight out of The Graduate.
Before anyone complains about the validity of this street sighting, yes, this car was parked on a public street behind Alfa Center, a shop that specializes in repairing Alfas, Fiats, Ferraris and Mercedes. 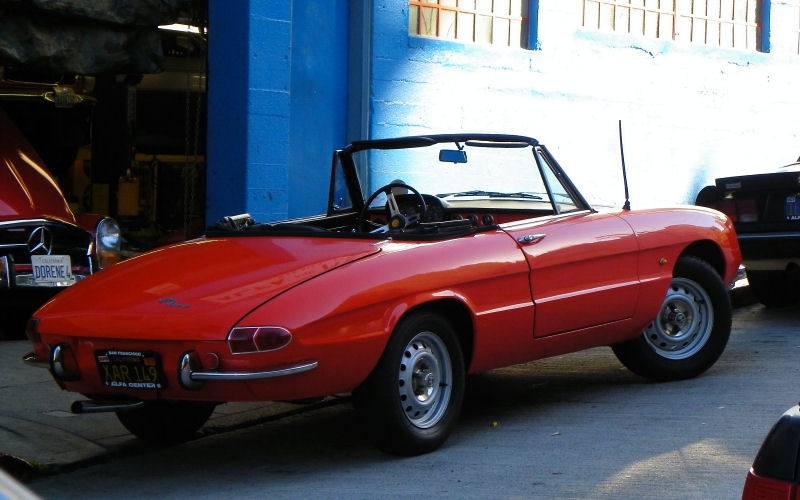 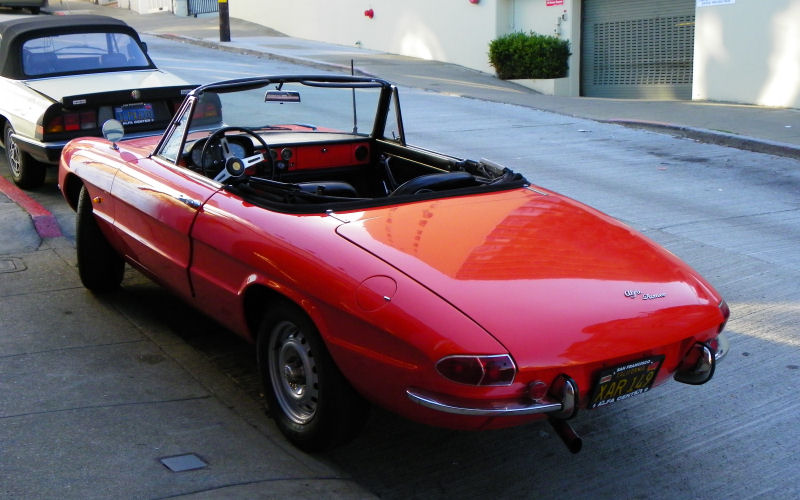 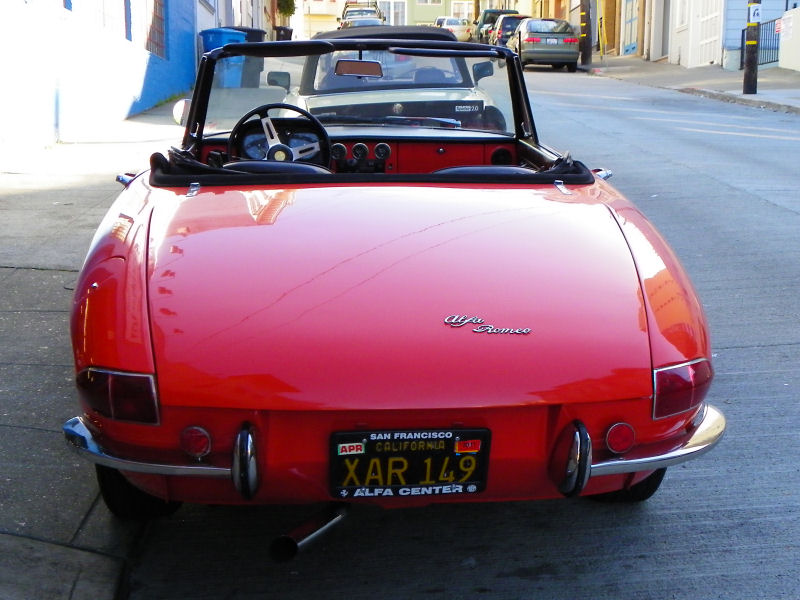 Condition is excellent, with nearly flawless body panels and straight trim. Sadly I didn't get any close-up shots because my camera battery died on me. I really wanted one of that cool Alfa Romeo script on the trunk lid, and maybe a dash picture. It was not to be, but hopefully the other images adequately document this car.
By modern standards this is an unsafe, loud, poorly equipped, polluting old car with a top that comes down by hand. A modern sports car will hold your drinks, play your CDs, and might even have a cool origami-magic retractable hardtop or massage your butt while you drive. This is just a timeless, classic red roadster, and it has nothing to apologize for.

Mr. Hoffman, your ride is here.
Posted by Jay Wollenweber at 1:00 AM