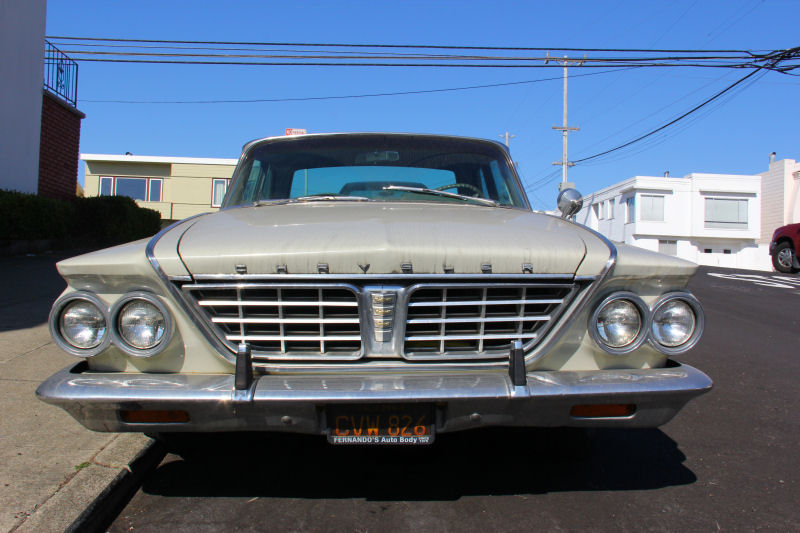 It's hard to believe it took me the better part of a decade to get this car onto the blog. I first sighted this 1963 Chrysler New Yorker in San Francisco while on a road trip around California with friends in 2007. At that time it was parked in the Inner Richmond neighborhood and sitting on American Racing directional sawblade wheels. I only got a couple of snapshots of it that day, and spent my entire college years exploring the city with that Chrysler on my list of vehicles to find and shoot in depth. It was only after a day trip in which I covered the entire road grid of the Sunset District that the car turned up again. The first time I located the New Yorker it was very late in the day and my shoot came out poorly, half of the car in the shadow of the houses across the street. I came back at a later date and did much better. 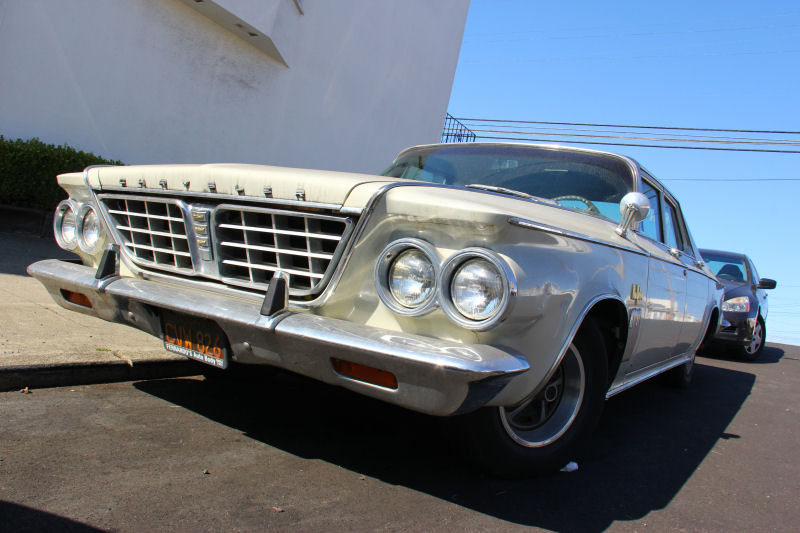 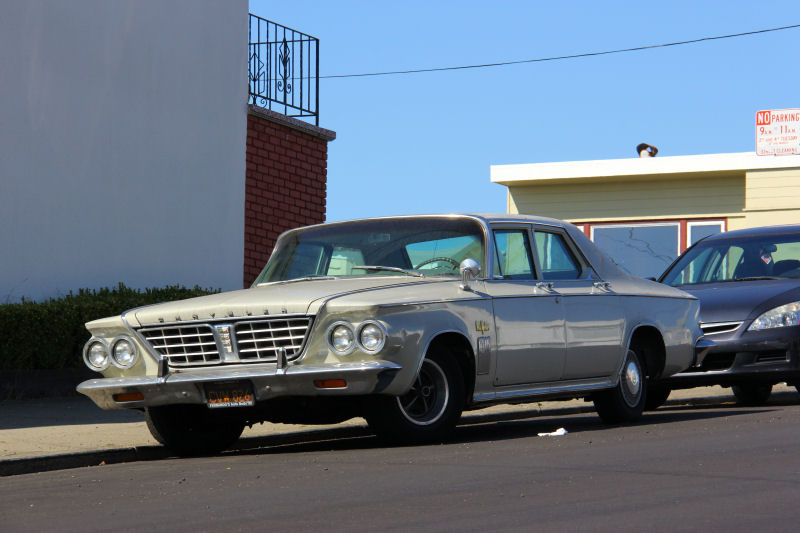 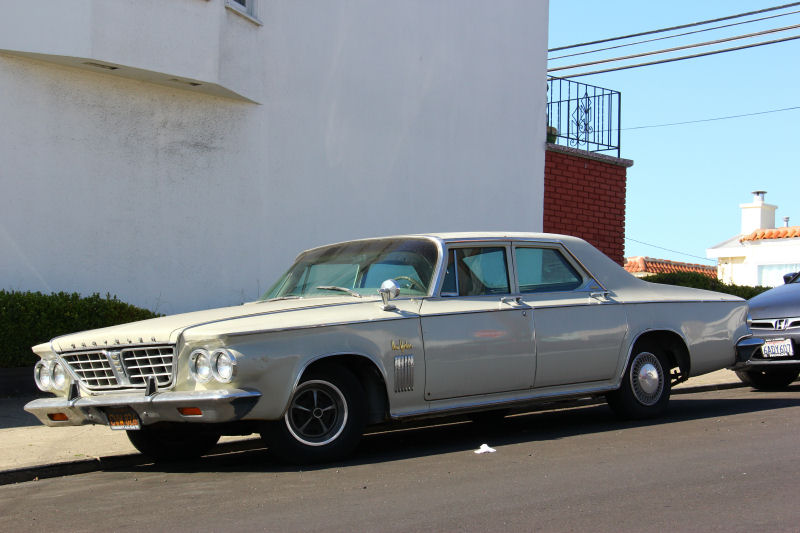 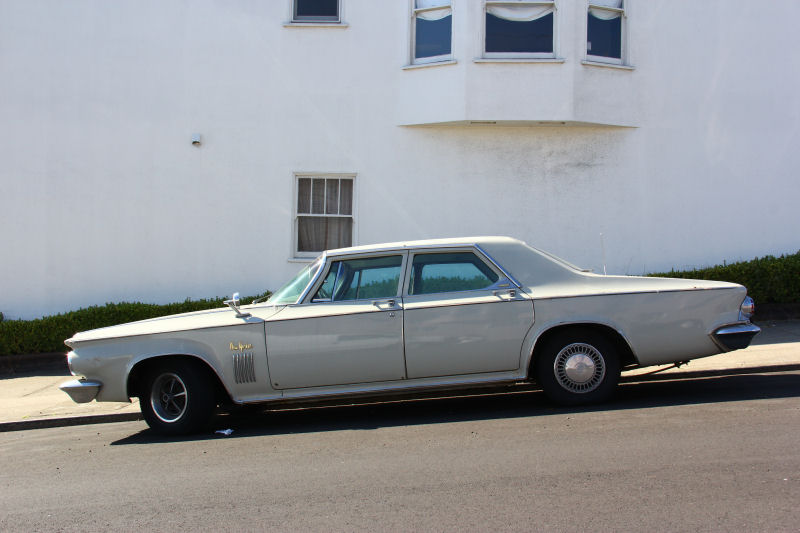 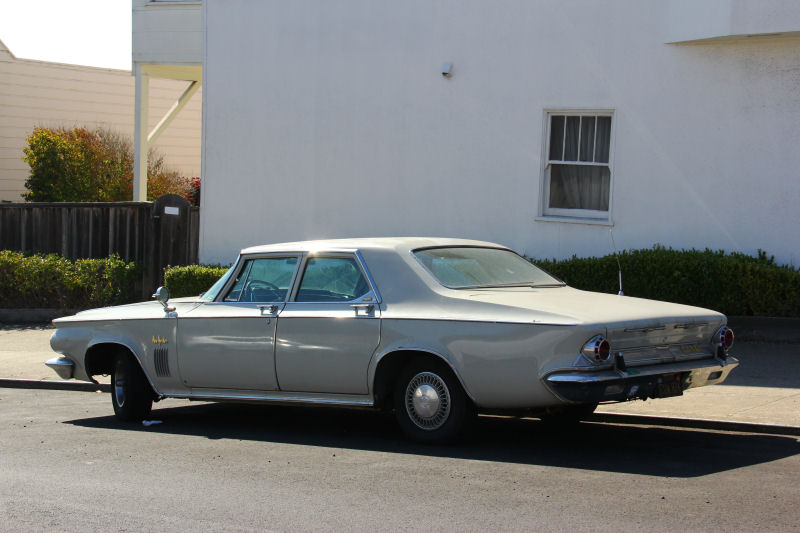 This isn't the first time we've looked at a 1963 Chrysler fullsizer here. I found a 300 coupe down in Santa Cruz in 2013. In the grand scheme of car collecting, a 300 coupe is probably more desirable than a New Yorker sedan, but this New Yorker is in much better condition. Or at least it was at the time. The Santa Cruz 300 was a restoration project wearing primer at the time I photographed it. This car has some rust bubbles and streaks present but generally looks solid, and the paint is shiny. It wears an unusual combination of mid-1970s Mercury Cougar hubcaps and one Magnum 500 mag wheel on blackwall and whitewall tires. 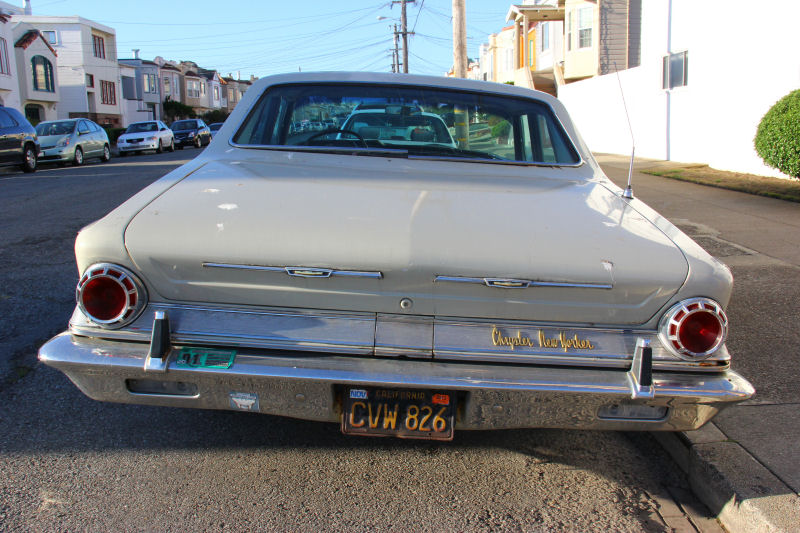 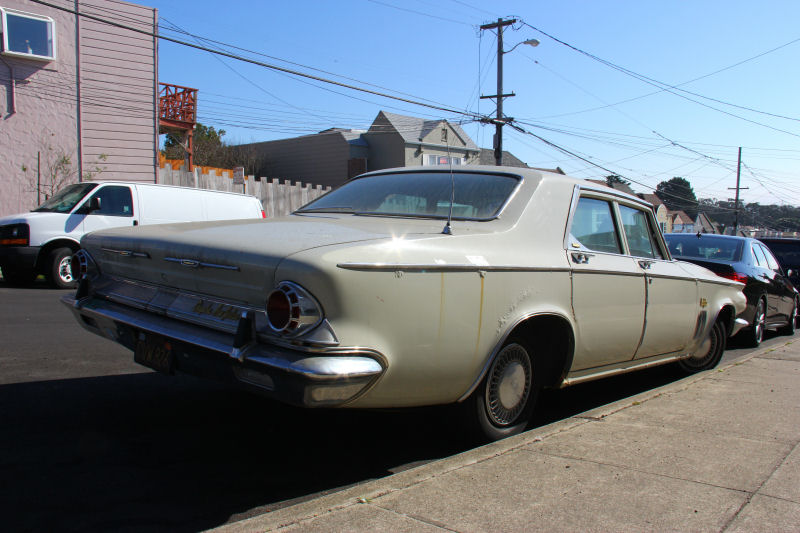 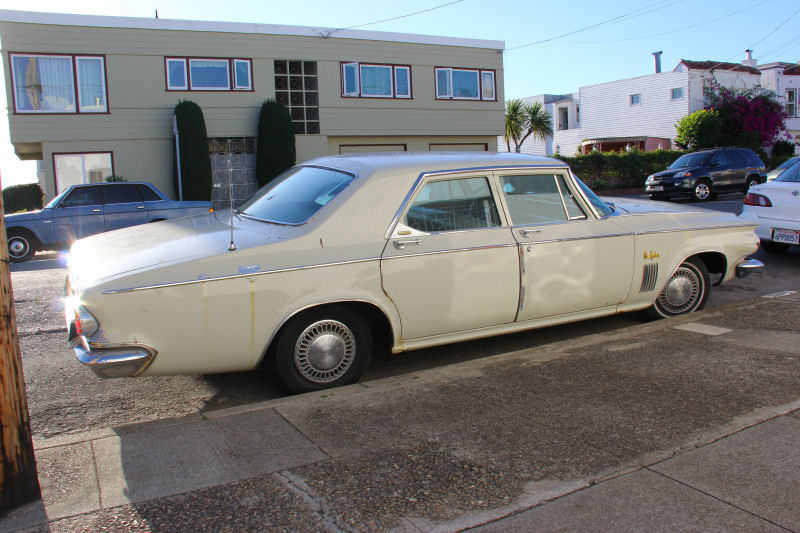 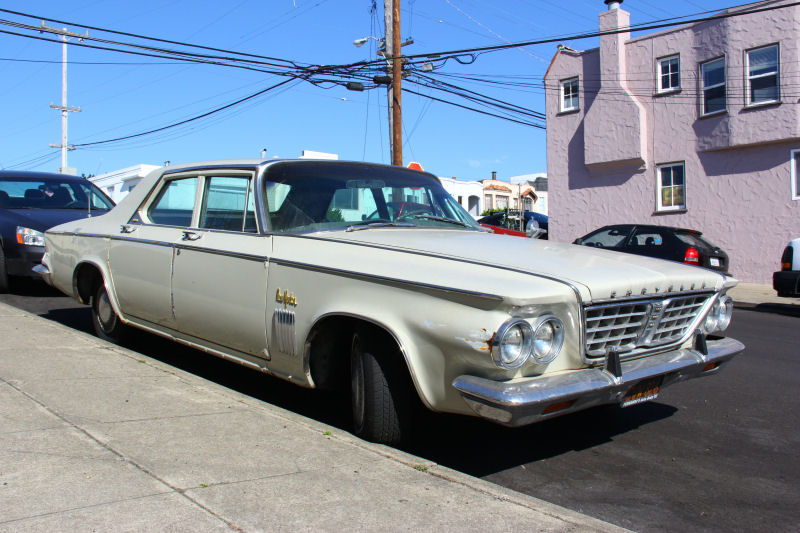 The '63 models were just such a strange year for Chrysler. Styling maestro Virgil Exner was on his way out as management exerted their own influence on design. Fresh off of the corporate styling disasters of 1962, these new cars toned it down slightly. Admittedly the '62 Chryslers were mainly just '61s without fins (Dodge and Plymouth received the real kooky designs). But the order of the day seemed to be trapezoids and the '63 New Yorker has lots of them. Anything that isn't trapezoidal is circular. The body is simply detailed for the era, with one friend describing the design as looking like a clay sculpt that was sent into production without any refining". Underneath the new body is much the same chassis that dated back to Exner's heyday. If you look closely you'll notice the same windshield shape from the 1957 models. Chrysler moved over 118,000 cars in 1963, marginally more than the previous year. 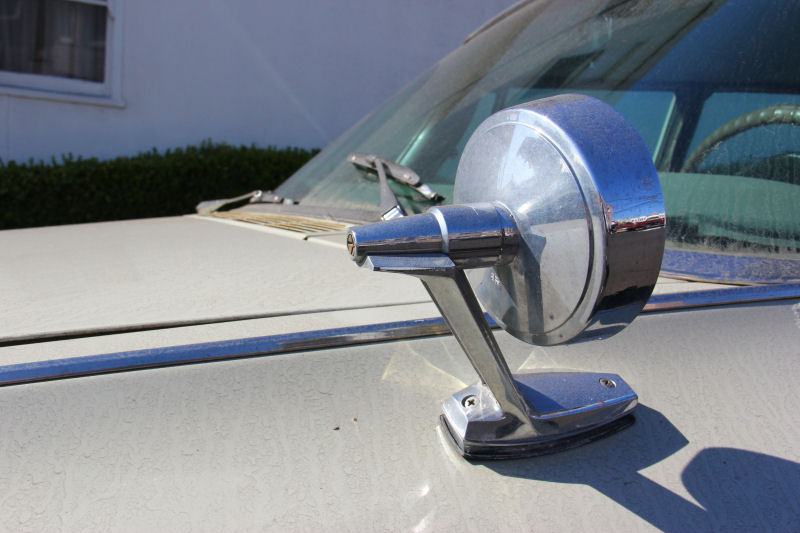 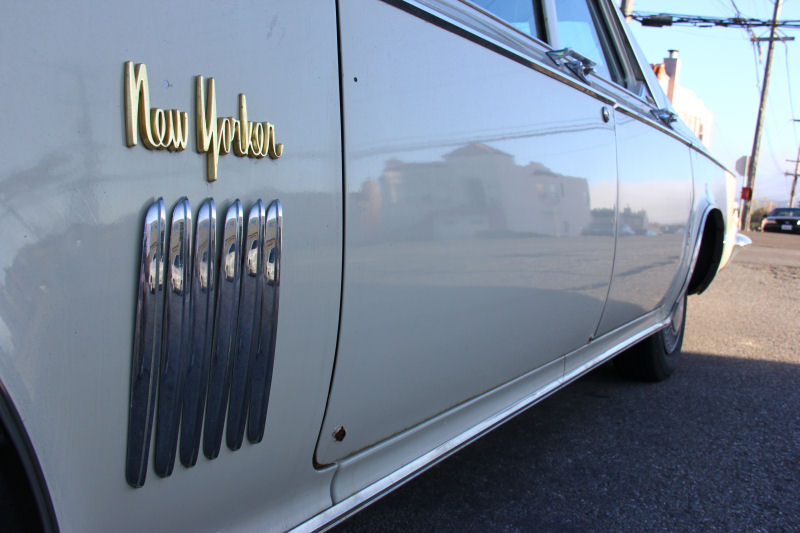 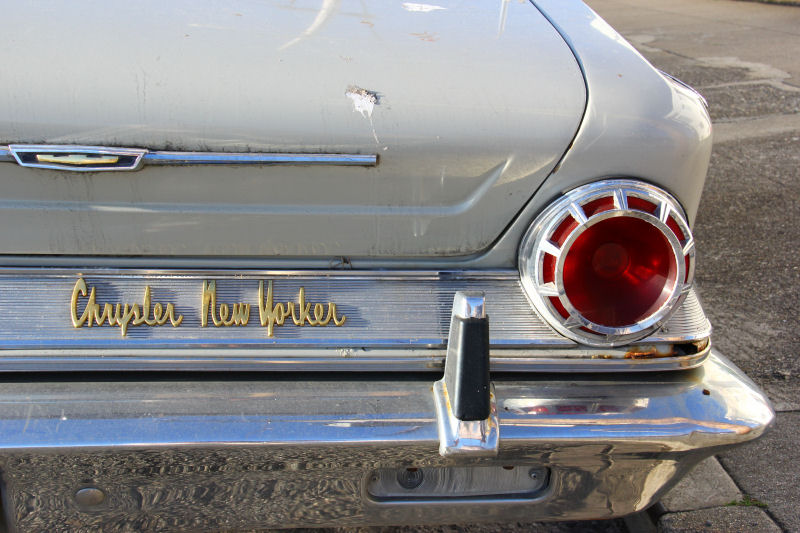 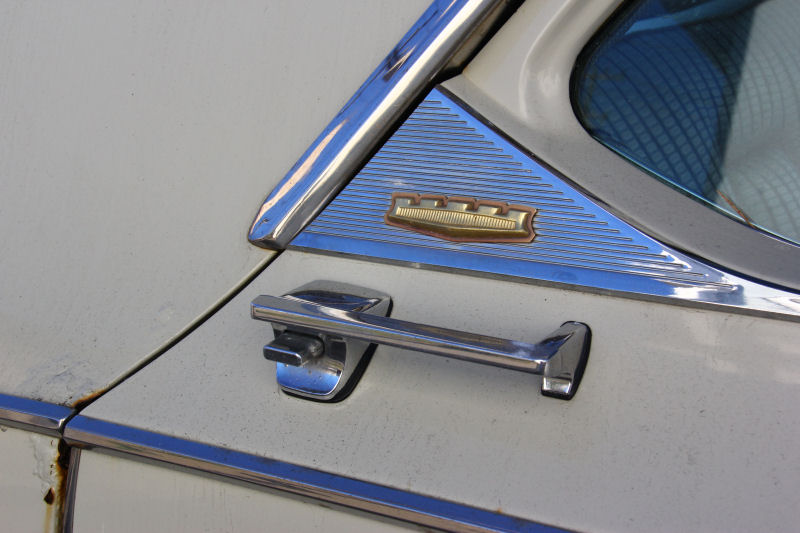 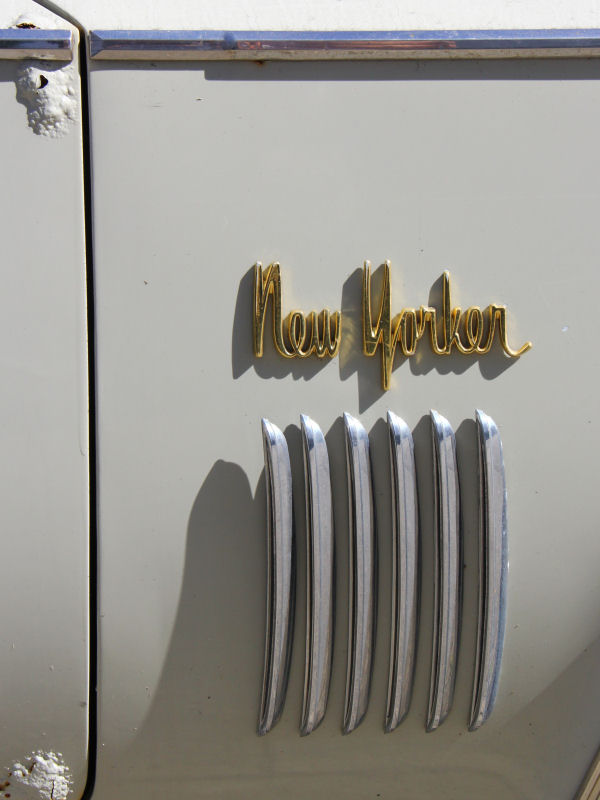 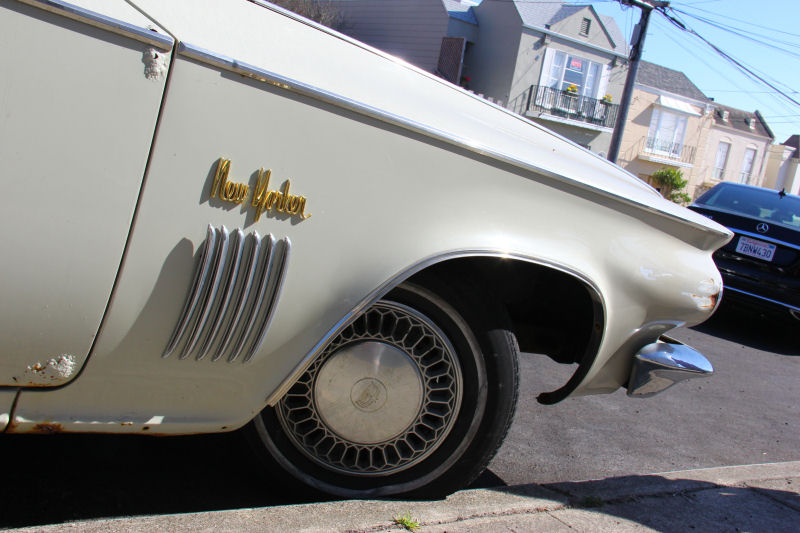 This car is a regular New Yorker sedan, which would have come from the factory with a 413 "Golden Lion" Wedge V8 producing 340 horsepower. That's no slouch by anyone's standards and probably greatly appreciated in a car this big. It's primarily a boulevard cruiser and will never win any races unless said race doesn't involve any corners. A '63 New Yorker is a curious choice for San Francisco, a town known for limited parking options. But this was in one of the outer residential neighborhoods with much less hustle and bustle. It's a curious car in general from stem to stern, and it has some intriguing details. When shooting cars, interesting lines make for interesting times.