I've had surprisingly good luck buying diecast models from my local BigLots! bargain store. Granted, I've only bought two, but when they do get something good in, it's a heck of a deal. I've seen Hot Wheels, Revell, Bburago, Yat Ming Road Signature and Sun Star 1:18 models there over the years, all at deeply discounted prices. This 1999 Jaguar S-Type 4.0 Sport by Welly wasn't too shabby for $12.99. At the time, I knew absolutely nothing about the Welly brand, only that I had to choose between the British Racing Green Jag and a black Volkswagen Passat. I have no regrets as to which one I picked. 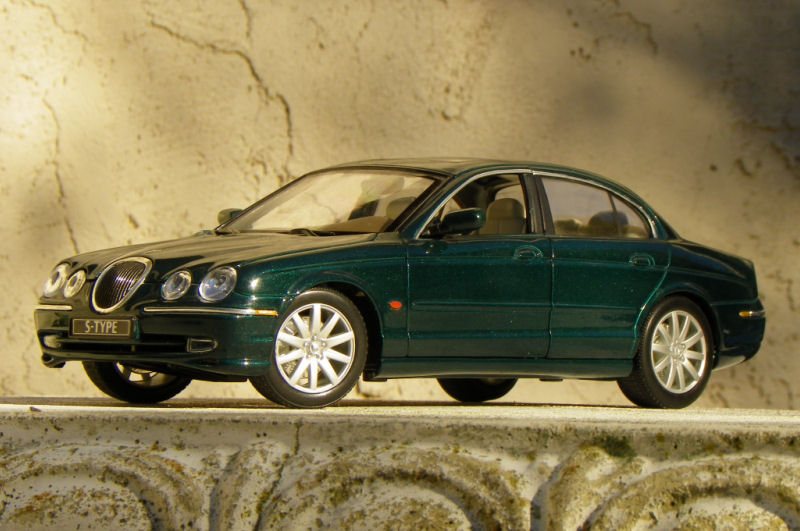 From what I've seen, Welly is a decent budget model brand based in China. I have a few of their models and haven't been disappointed by their quality, especially since I haven't paid more than $20 for any of them. The Jaguar is at least on par with Maisto, which might have something to do with the fact Maisto also makes an S-Type. Perhaps the two companies use the same tooling? It's not unheard of in the industry for one company to sell or license their tooling to another. Welly and Motor Max have been doing it for years. Case in point: the Motor Max Ford Crown Victoria Police Interceptor is an old Auto Art casting, so you get near-Auto Art quality and detail for under $30. Not bad at all. 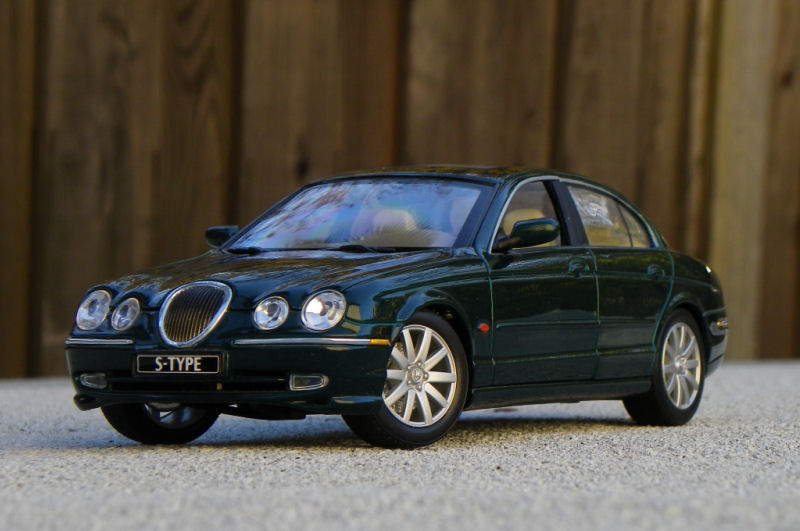 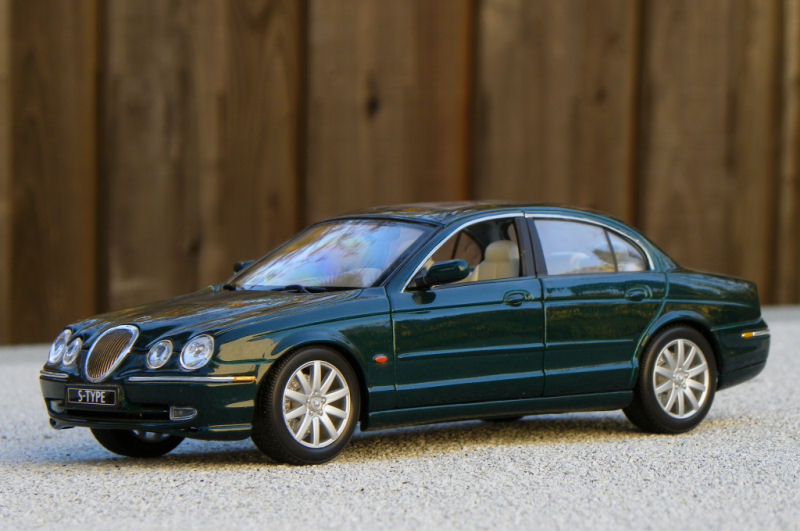 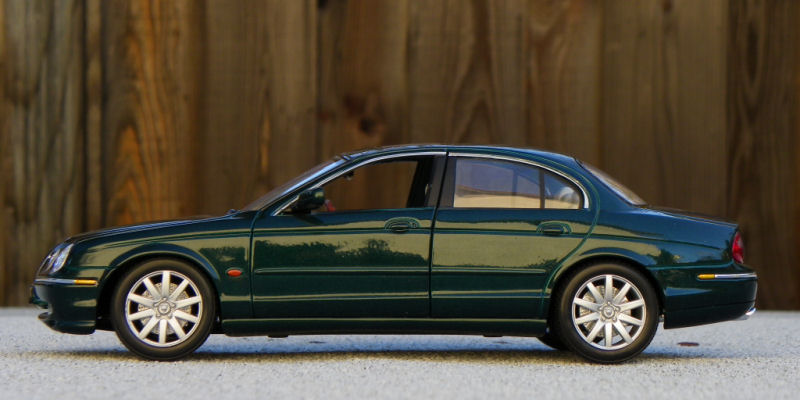 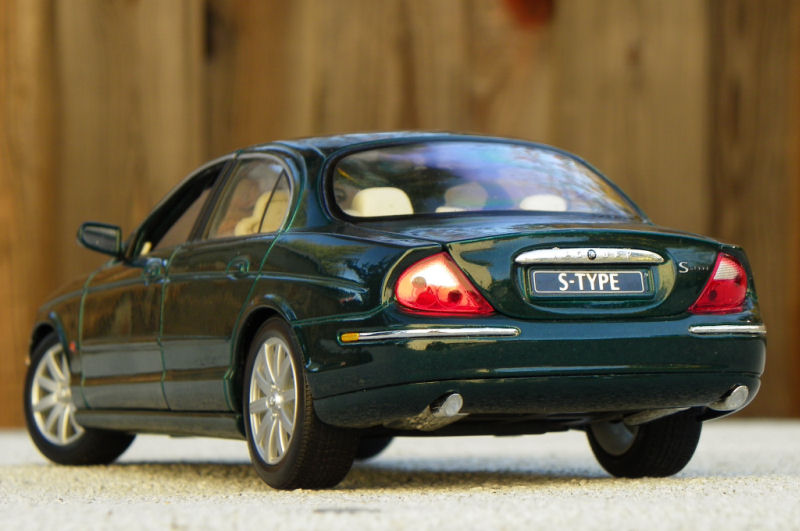 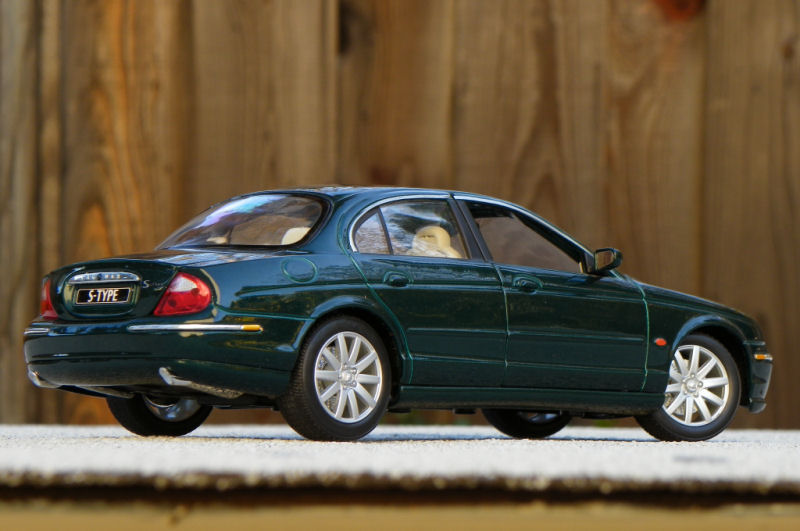 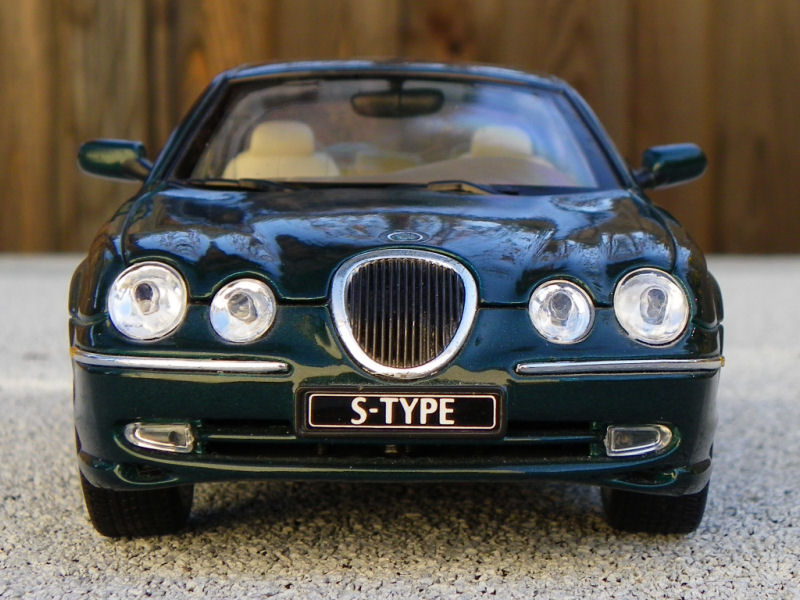 Anyway, back on topic. The S-Type is a decent casting, with an accurate shape and opening [front] doors, hood and trunk. All opening parts utilize big chunky hinges that hurt the realism, though at least they work. You get steerable wheels but no working suspension. The sunroof isn't supposed to be removable but can be popped out carefully without damaging the car if you want to display it with the sunroof "open". Unfortunately the plastic door mirrors are quite fragile and the driver side mirror broke off one day while the model was being transported. I re-glued it and it's been fine ever since. The wheels feature caliper-less brake discs inside them, likely because they spin freely with the wheels and calipers would have presented a problem there if cast as one piece with the brake disc. Body gaps are pretty tight when everything is closed. The side markers and turn signals are all painted on, so the only actual lenses are the headlights, taillights and fog lights. Those are mounted with pegs that are visible through the lens, bothering the model snobs who scoff at such things.
Once you pop the hood, you may be disappointed. The 4.0 liter V8 is rendered with about as little detail as Welly could get away with. Most of it looks like one shaped piece that incorporates the engine cover, air intake, shock towers, battery, radiator shroud and even the cowl and windshield wipers. Below that is a thin wafer of grey plastic shaped into all the spark plug wires and other hoses, and below those is a vague black square of plastic that serves as the engine block. Clever cost-cutting or just lazy? 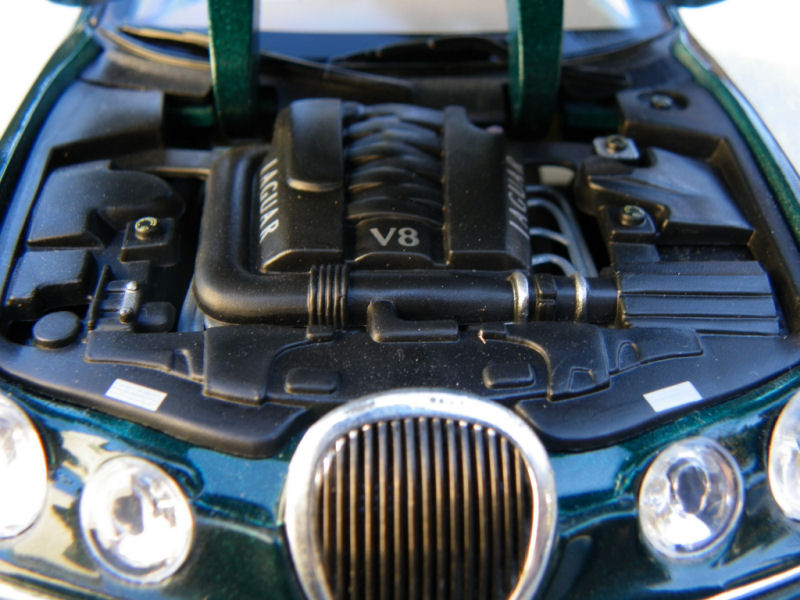 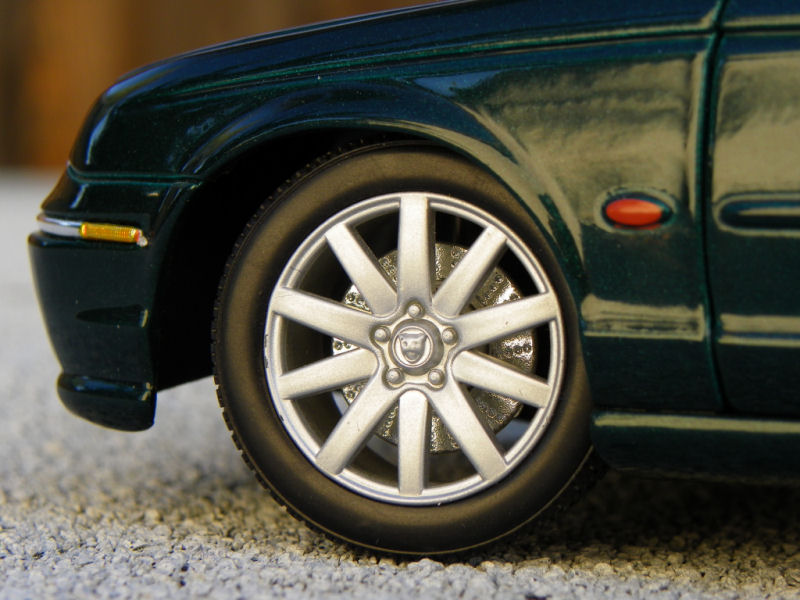 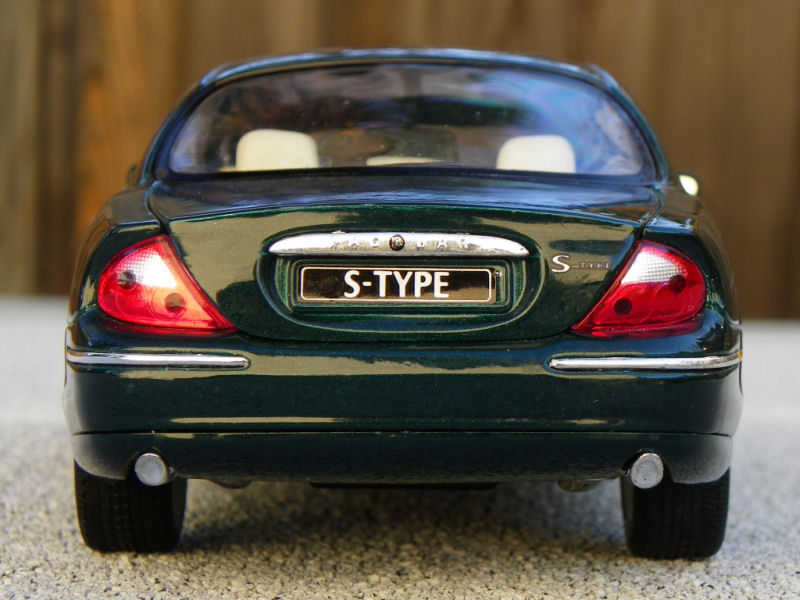 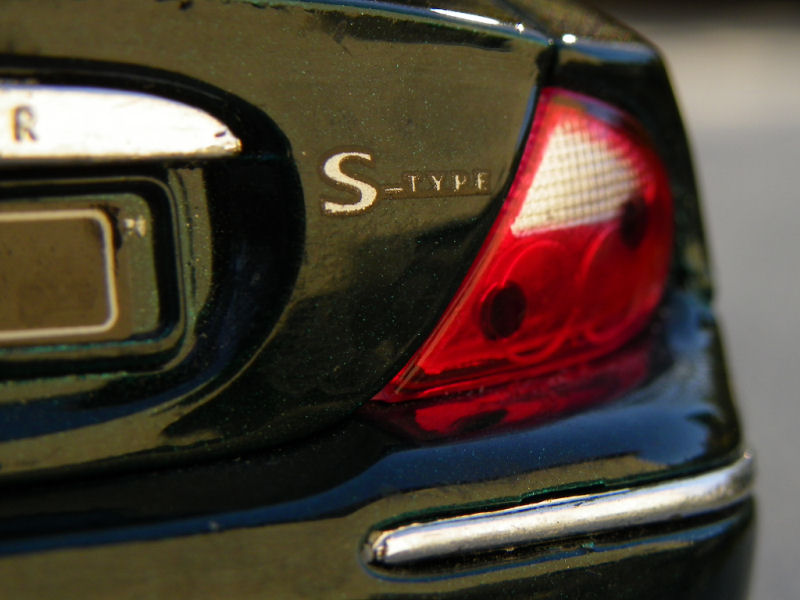 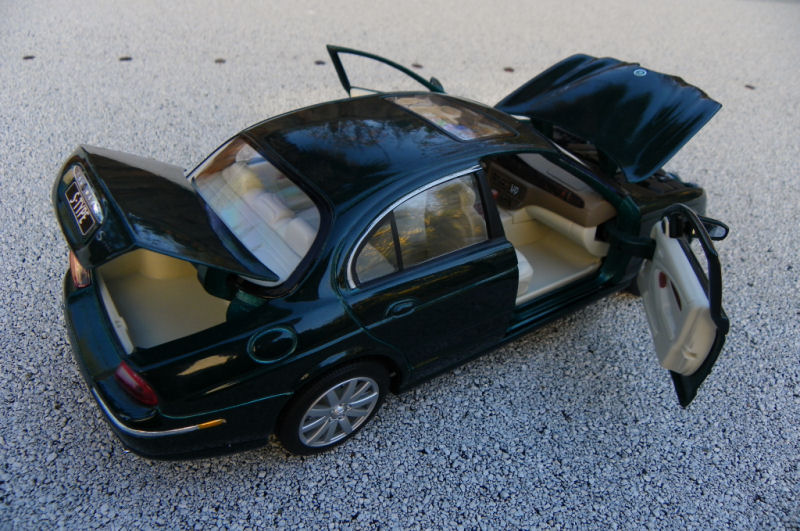 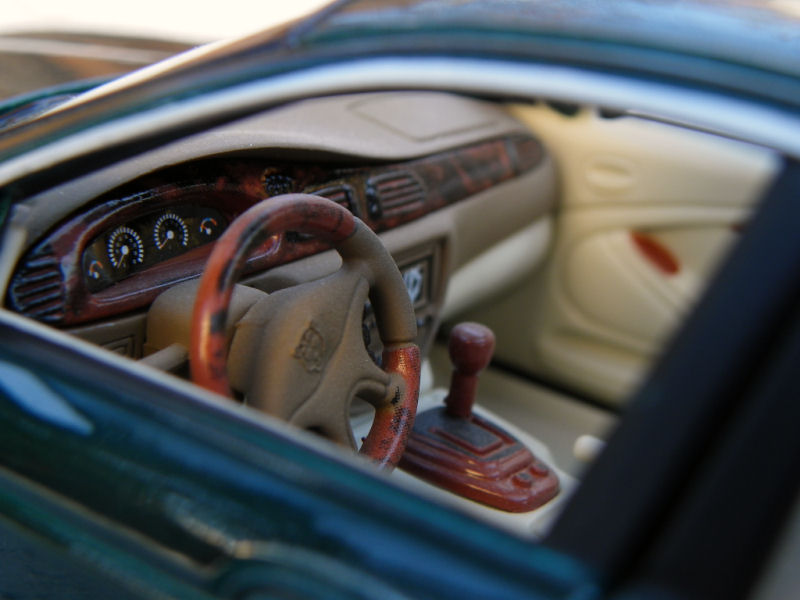 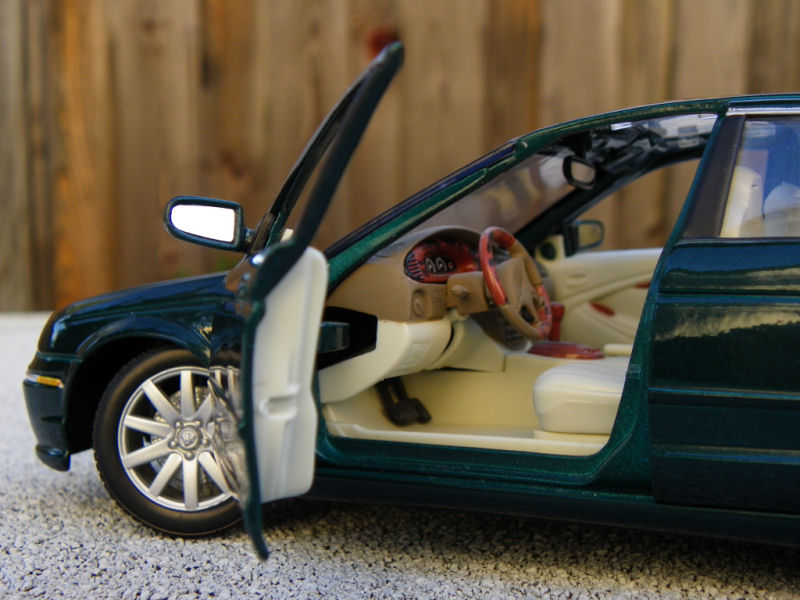 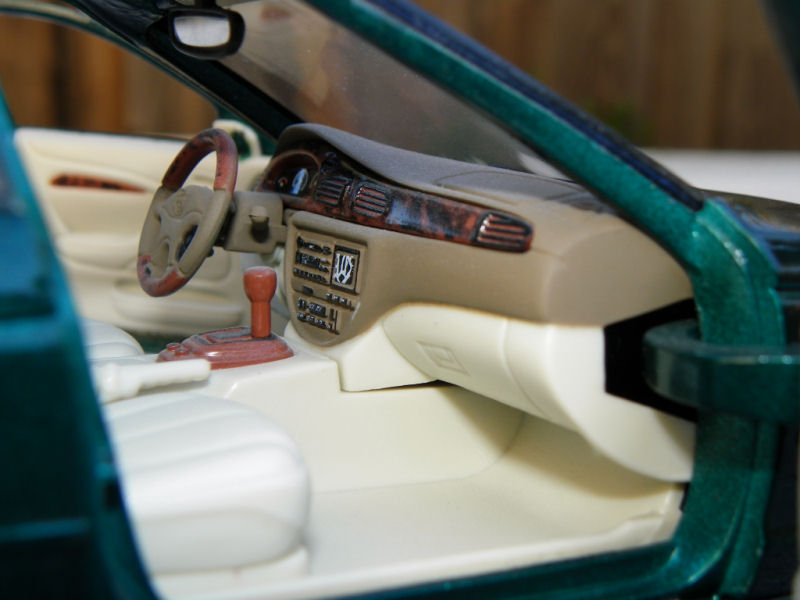 The interior is a little better. Instead of being painted, the seats are molded in off-white and interior parts are only detailed with paint where necessary. In this case it means the wood trim on the door panels and the center console, and the brown dashboard and steering wheel, complete with their own wood trim. The "wood" looks about as convincing as the wood in a mid-1990s Buick, which is probably not far off from the real S-Type. The factory painted the steering wheel audio control buttons nicely, and hinted at lettering on all of the radio and HVAC controls on the center stack. There's also a navigation screen with a cute little map on it. They even replicated the dreaded J-gate shifter so loathed by road testers. The instrument cluster exists as a multi-dial sticker which was applied crooked on mine. I appreciate that the factory was diligent in painting the black weatherstripping and chrome trim around the windows, and included the tiny post in the rear passenger doors as an applied bit of paint or decal rather than as a bulky plastic piece molded into the window glass. I do wish that the center high-mount brake light in the rear window had been detailed instead of being left as an empty space, but one can't ask for everything. The bottom of the car is low on detail, with a basic (probably imagined) suspension setup and a fully chromed exhaust system. Everything else is just parallel grooves in the bottom of the floor pan and a couple boxes containing the name of the car, the manufacturer and the all-important "Made in China".
I don't regret adding this car to my collection. It was my first four-door car model (aside from the Hummer H1) and it got me interested in collecting sedans and other mundane, everyday cars. It's clearly not a high-end model, and it doesn't pretend to be. What I like about it is that somewhere, some youngster is pushing a car just like mine across his living room carpet, making vroom-vroom noises and pretending he's just like his daddy who drives a real version of that same car. Exotics are wonderful, but some of us like the down-to-Earth cars, too.
Posted by Jay Wollenweber at 12:00 AM