I've recently had a discussion with one of my readers regarding notable cars spotted near car shows. It begs a question -- what do you do if the car you just found is a local vehicle you've known about for years, searched for in vain, and only just found parked on the street conveniently around the corner from the 2011 California Mille? The Mille is a 3-day driving event held every spring, catering to well-heeled driving enthusiasts who cover 1000 miles of scenic California roads in their (generally) pre-1957 cars. Prior to the race, the participants' cars are put on display in front of the Fairmont Hotel on Nob Hill in San Francisco. Occasionally someone drops in with an interesting vehicle and parks it near the show. In this case it's a 1970 Citroën Ami 8 Break, one of the most eclectic cars I've yet seen in The City. 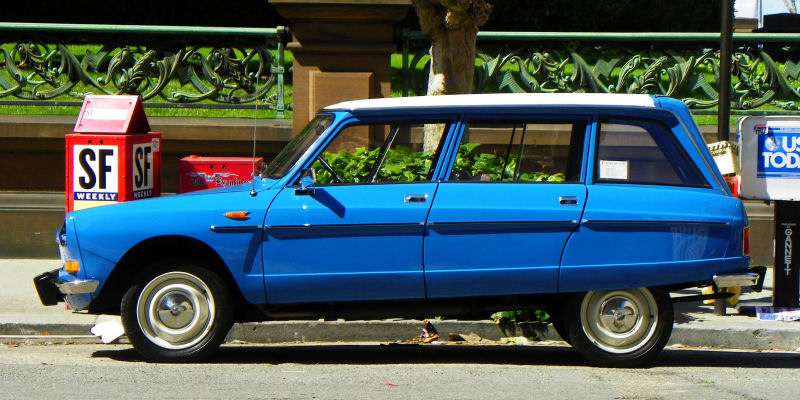 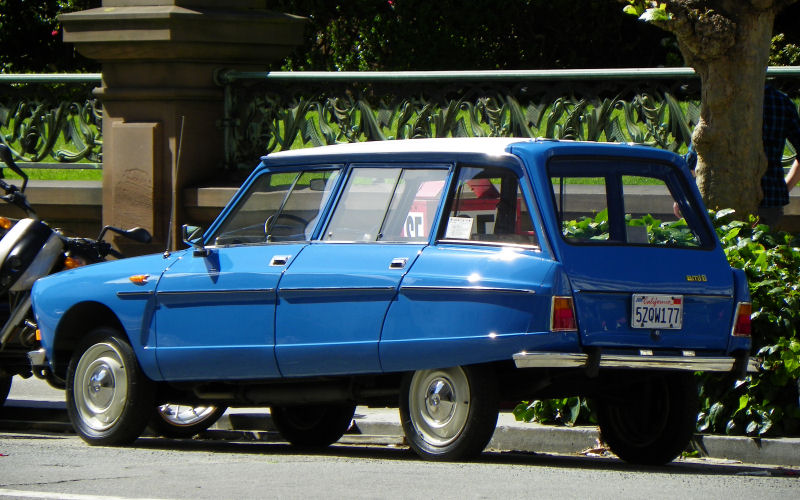 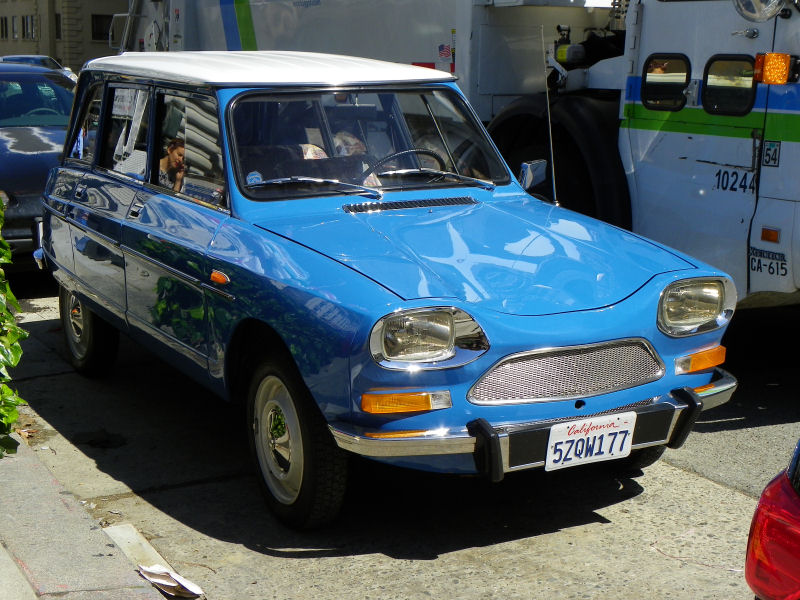 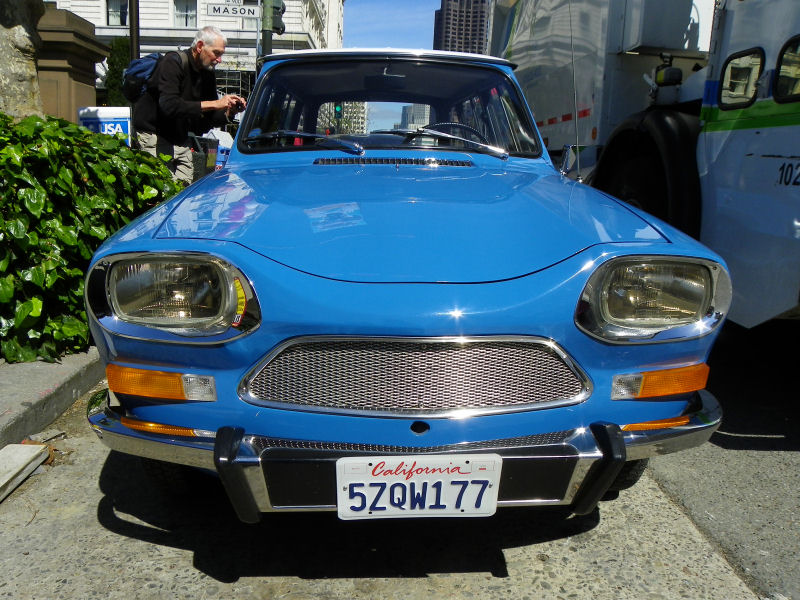 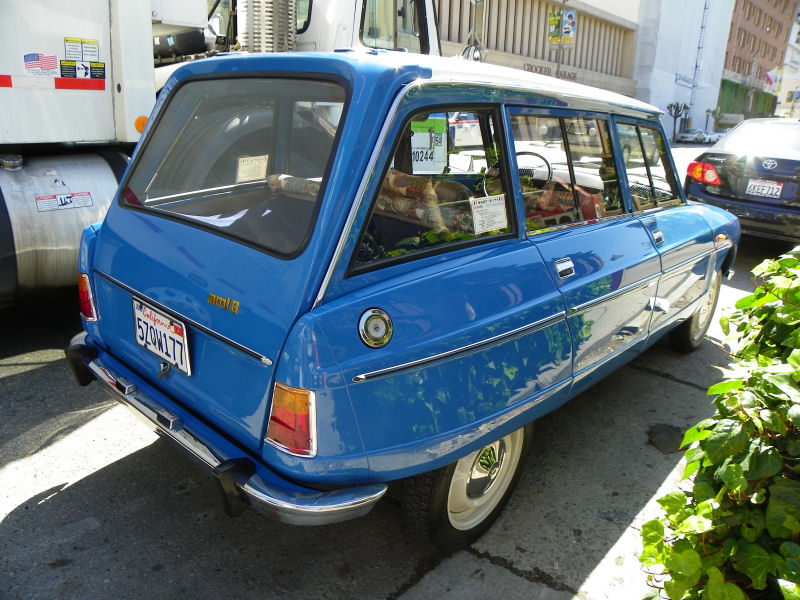 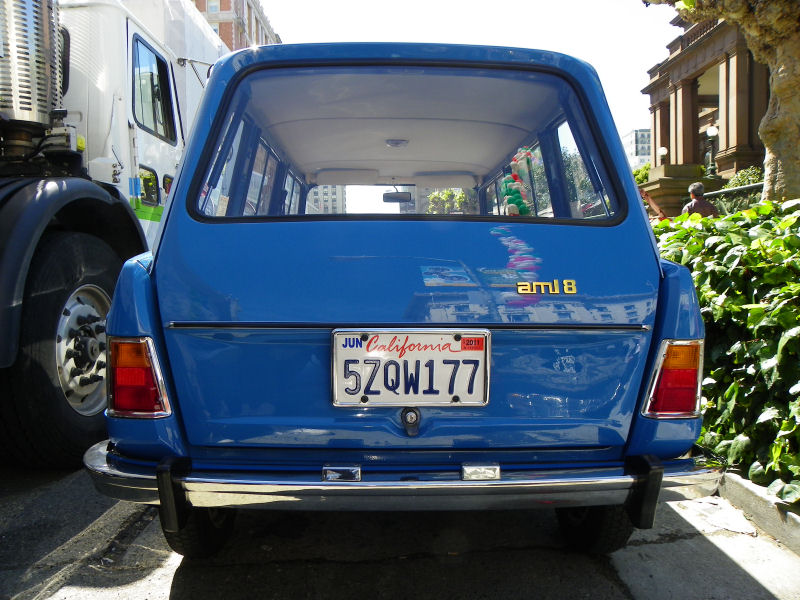 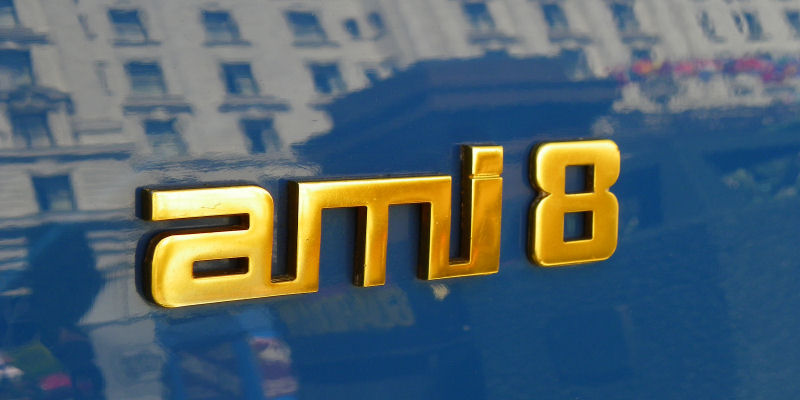 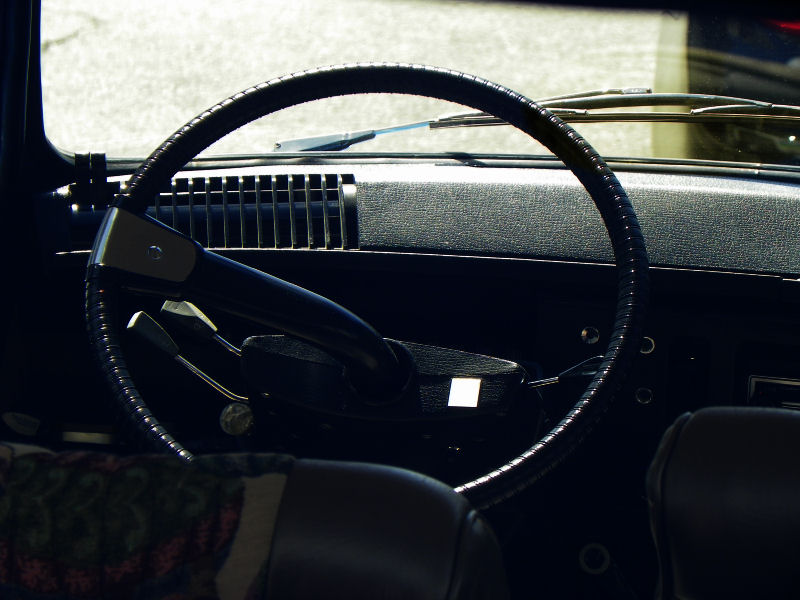 Now, some of you are probably complaining that it isn't a street sighting because you can literally see the tri-colored balloon arch of the California Mille in some of the photos. Yes, the show was being held all of 20 feet away. At least I'm honest about it, and my readers have asked for more French cars since practically day one. The fact of the matter is, I had never seen this car before except in pictures on Flickr, where it was parked in front of Cafe De La Presse near Chinatown. I don't know how many times I went in search of this car after my classes (as well as the elusive 1959 Edsel Ranger that supposedly lives two blocks from the cafe).
You can tell that the owner of this little Ami 8 cares very much about it. The paint is perfect, the chrome is perfect, and there's nary a ding anywhere. I'd wager it's probably restored, and beautifully so. There's even a little information sheet taped to the window for people who might stop by and say, "What the heck is that?"
The Ami basically is a 2CV in drag. Actually, it wouldn't be the only time the Deux Chevaux was dressed up with different bodywork, as the squarish Dyane was also sold alongside the Ami (and who could forget the Mehari, pretty much a French alternative to the Mini Moke). The Dyane lacked the snail-like 2CV's charm, though nearly all variations on the 2CV theme sold millions of copies. Everywhere except North America, of course, so the Ami is particularly rare here in any condition. I'll be honest, I hated, hated the Ami for years. My disdain is reserved mainly for the unusual sedan version with its reverse-angled backlight. The wagon version almost works. Looking at the whole package, it's sort of cute in an ugly-duckling, "it's French, you wouldn't understand" type of way. It's still hard to believe it was designed by the same man who penned the DS, which some regard as the most beautiful car ever made. Call me a Phillistine if you like; I'm not one of those people.
So it may not be even close to my favorite car, but the Ami 8 Break is one of the most unique sightings I've come across on the streets of San Francisco. Even if it was around the corner from a car show.
Posted by Jay Wollenweber at 5:22 PM