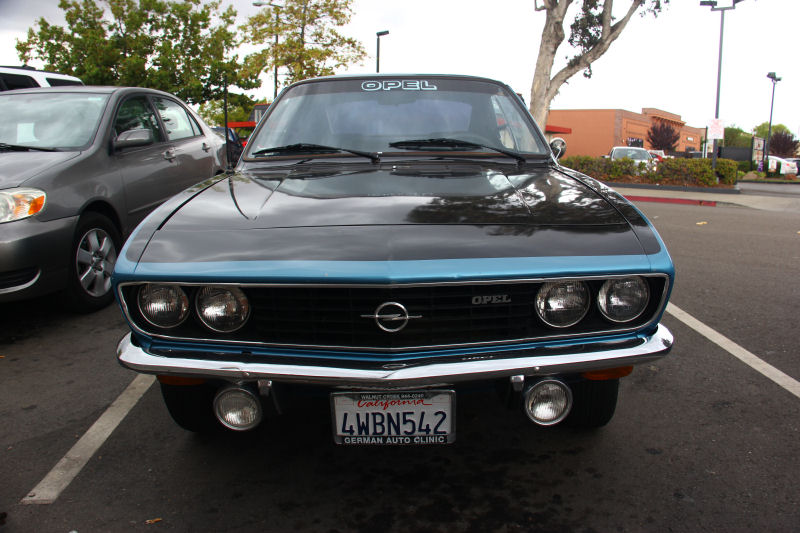 This one is a really old shoot, from 2014, but I haven't seen one of these since. It's an Opel Manta Rallye. 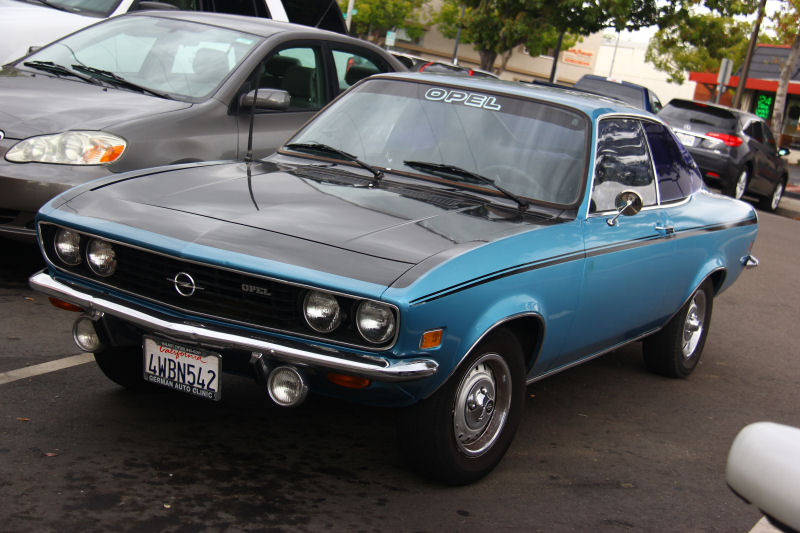 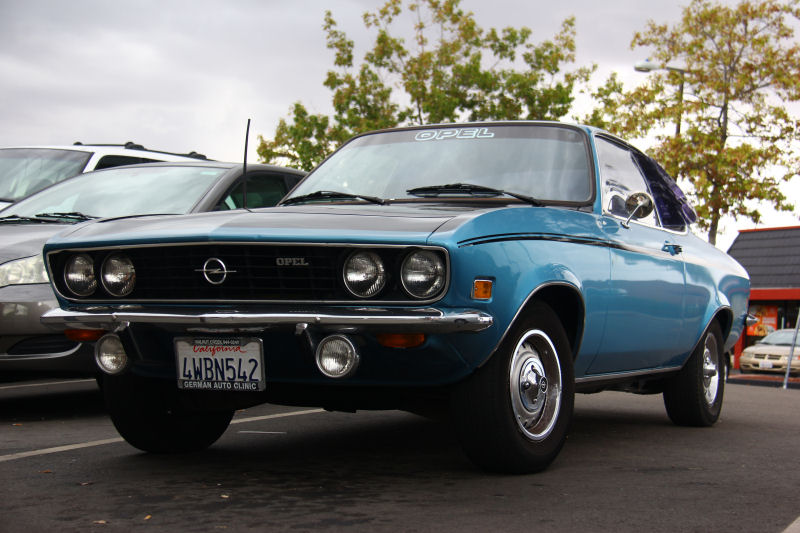 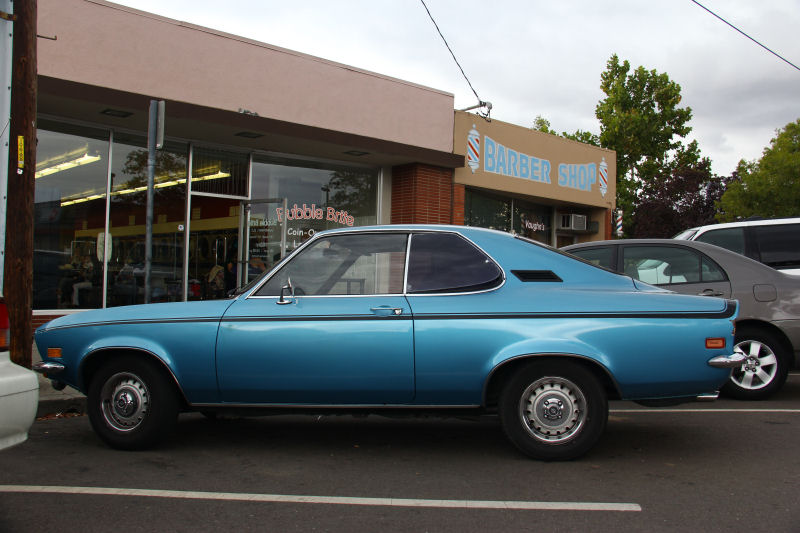 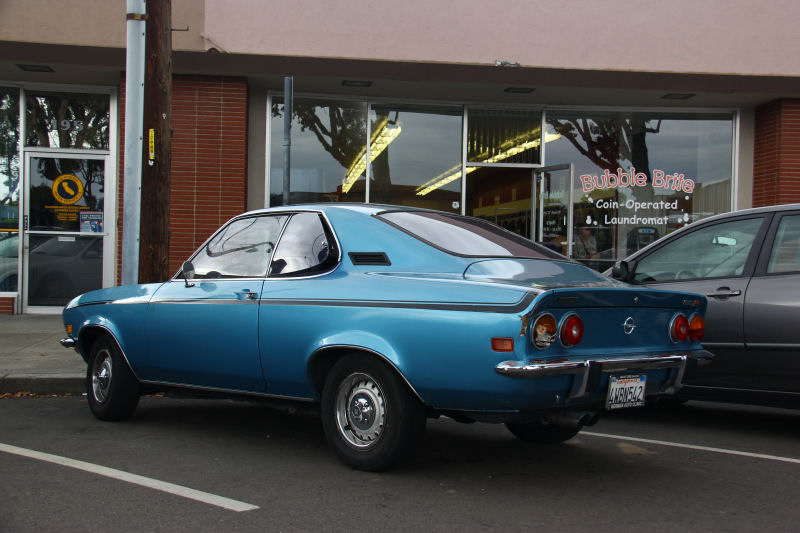 We haven't looked at many Opels here. The last (and only) one was a 1970 Kadett Luxus wagon in 2010. Opel was a popular carmaker in its native Germany, but was a niche brand in the U.S. For 17 years General Motors marketed Opel in North America as a seller of compact economy cars to compete with the likes of captive imports such as Ford's Cortina and Chrysler's Rootes Group offerings like the Plymouth Cricket. Most American Opels were Kadetts but a few sporty models were offered, such as the GT coupe and the Manta Rallye. 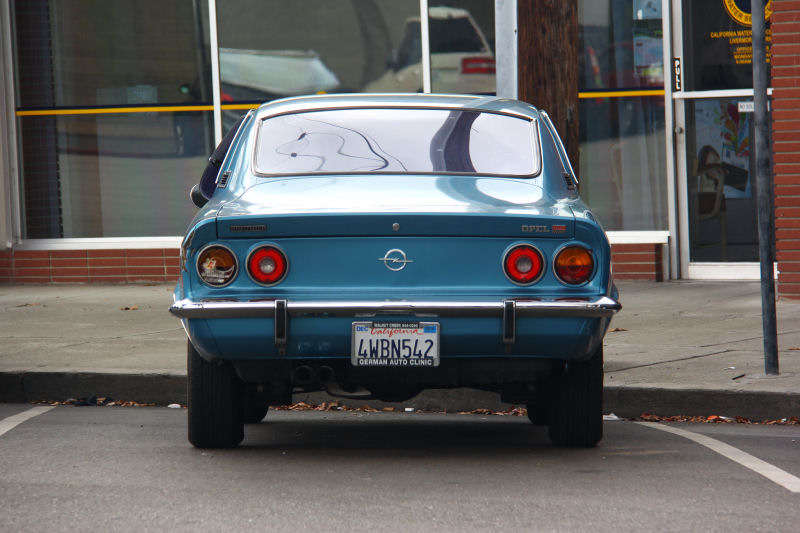 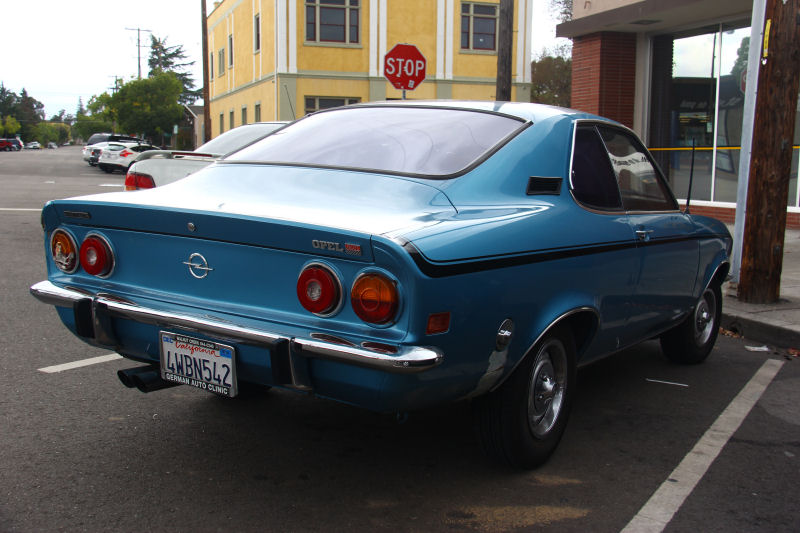 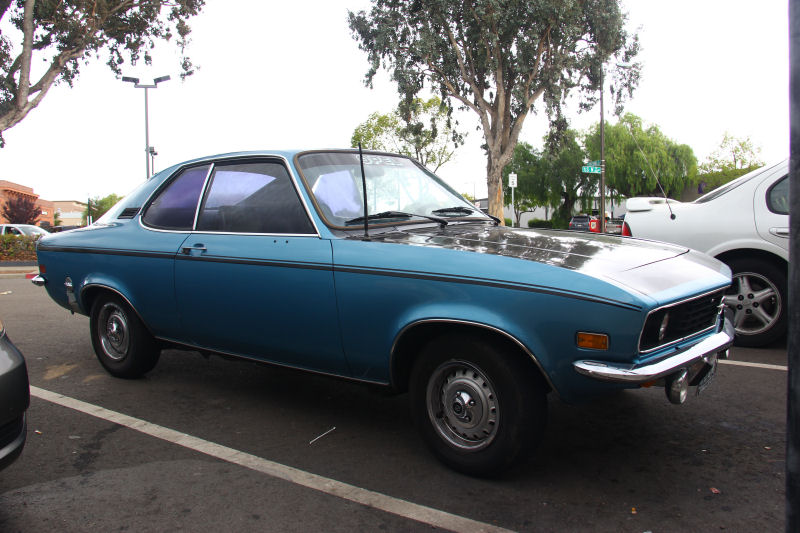 The Manta A competed primarily with Ford's Capri in its home market, and it similarly competed with the Capri in the U.S. Capri was offered through Lincoln-Mercury dealers under its own name. Likewise the Manta was sold through Buick dealers. Manta also competed with affordable Japanese newcomers such as Datsun's lightweight 510 and Toyota's new Celica. The Manta was initially labeled the 1900 Sport Coupe for the chassis architecture and powertrain it shared with the more plebeian 1900 (Ascona A) line of sedans and wagons. The Sport Coupe received a 1.9 liter four-cylinder engine making up to 90 horsepower. All coupes had a rear sway bar and Panhard rod for stability. The Rallye package featured a sport-tuned suspension with stiffer damping and tighter turning radius. Visually it received special badging, a blacked-out hood, fog lamps, side stripes and performance gauges. 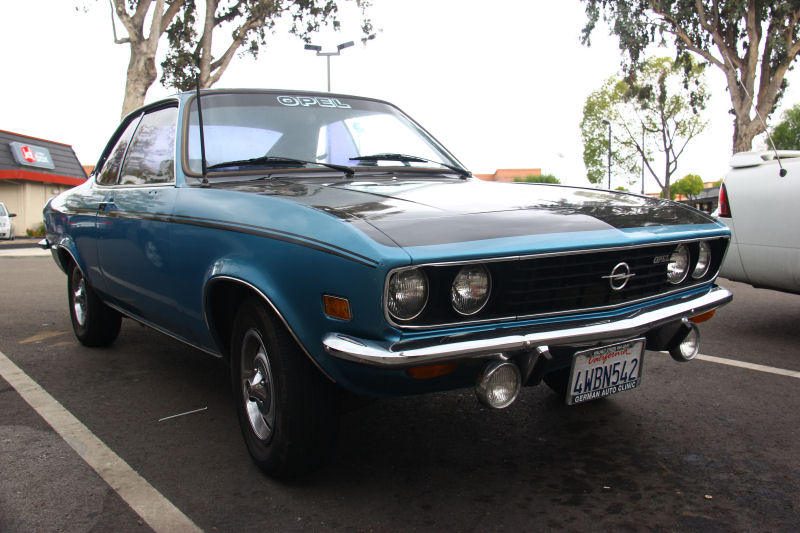 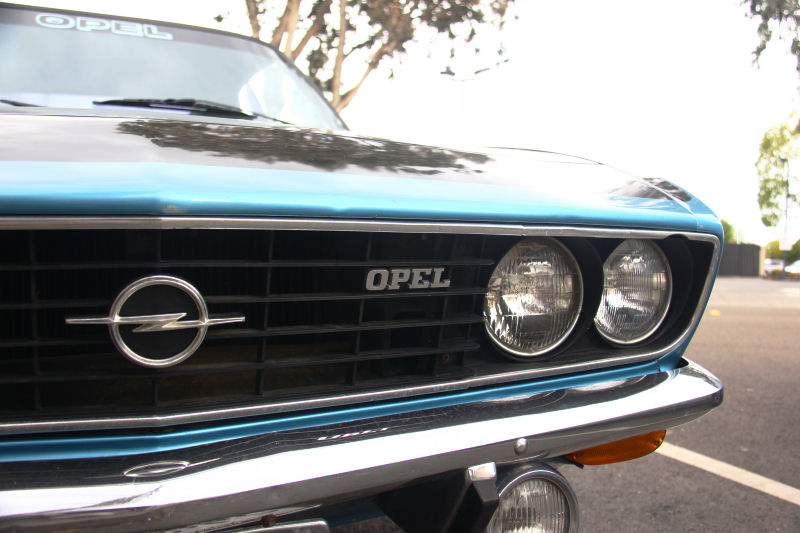 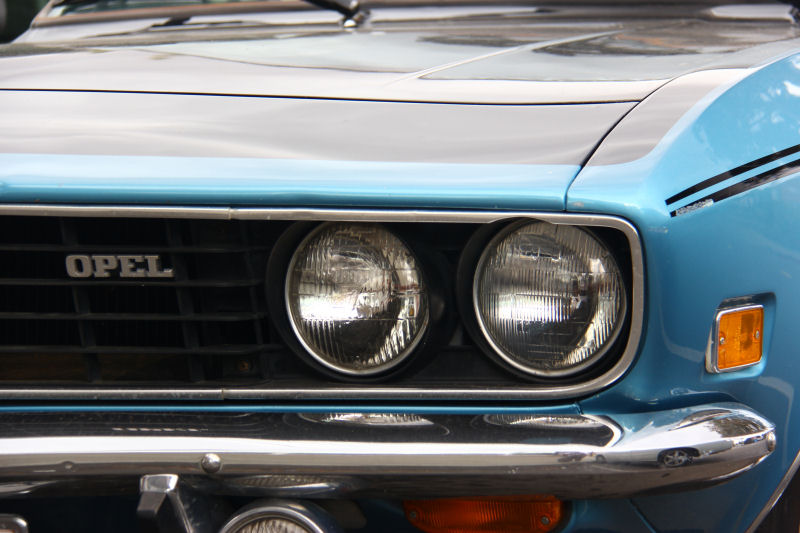 Manta was dropped after 1975 in North America, a victim of exchange rates and rising costs. The U.S. Opel brand got weird after this point. Any new Opels were actually Isuzu Geminis, themselves designed by Opel but built in Japan and still sold through Buick. So the last ones stateside were literally called the Buick Opel Isuzu. As Opel faded away from the American buyer's mind, Isuzu kept selling the Gemini as the I-Mark and managed to remain a bit player in the U.S. passenger car market for another decade or two. Opel briefly enjoyed a return to America in the late 2000s and 2010s, with Astra hatchbacks badged as Saturns, the redesigned Saturn Vue SUV (Opel Antara) and the 2011 Buick Regal (Opel Insignia) and 2013 Encore (Opel Mokka). 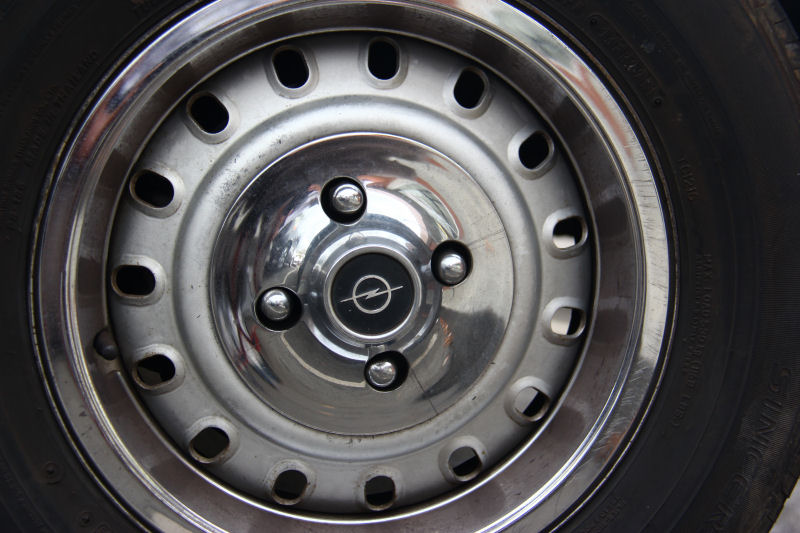 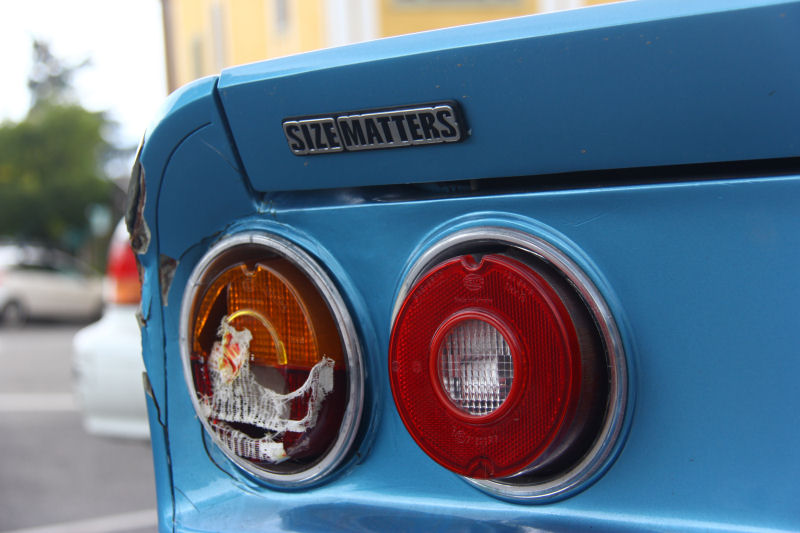 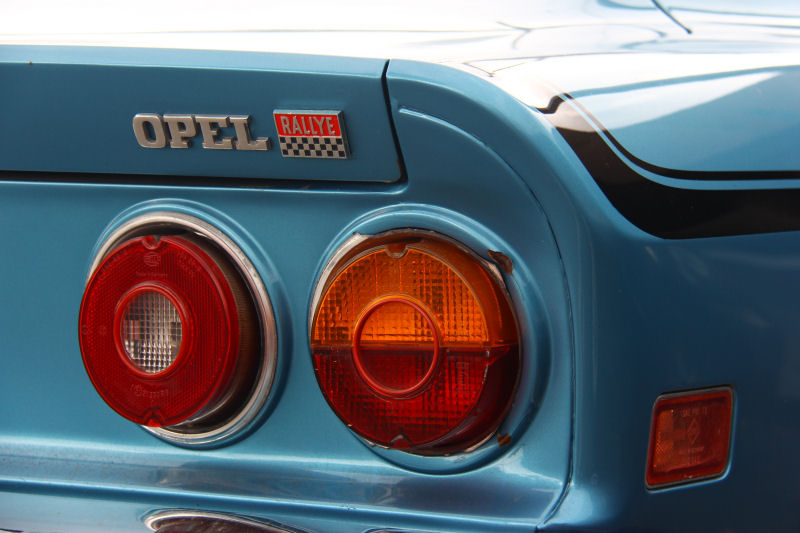 This Manta appears to be a solid driver example. These cars had a reputation as being particularly rust-prone. While this one looks to have suffered some cosmetic accident damage at the rear, the rest of the body looks good. I am loving the metallic blue color with the jaunty black stripes. The "Size Matters" badge is of course not original and I suppose it plays into how tiny the Manta is relative to modern cars. I'm hopeful that the owner was able to source new taillight lenses and bezels. Good used originals can still be found at fairly decent prices even today. It's a cute little car. I like it.