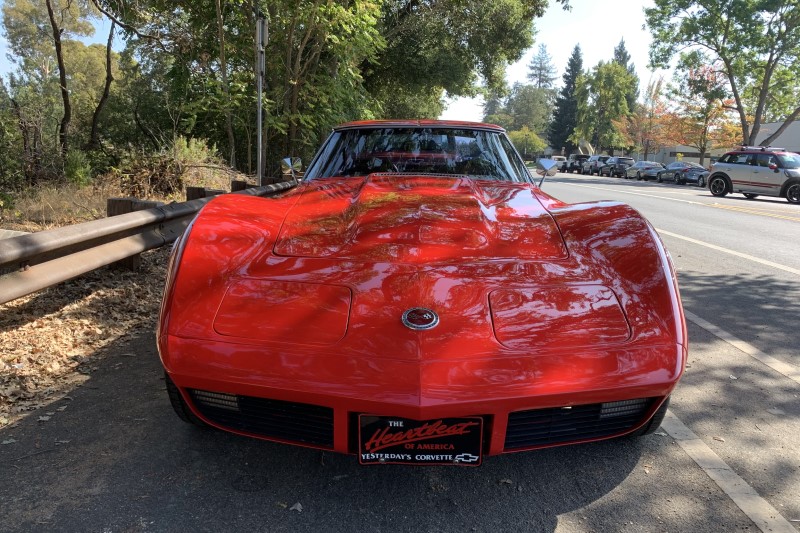 June 7 marks the birthday of a singer-songwriter from Minneapolis you may have heard of. His name is Prince.

In his honor and in his memory, here's a little red Corvette. 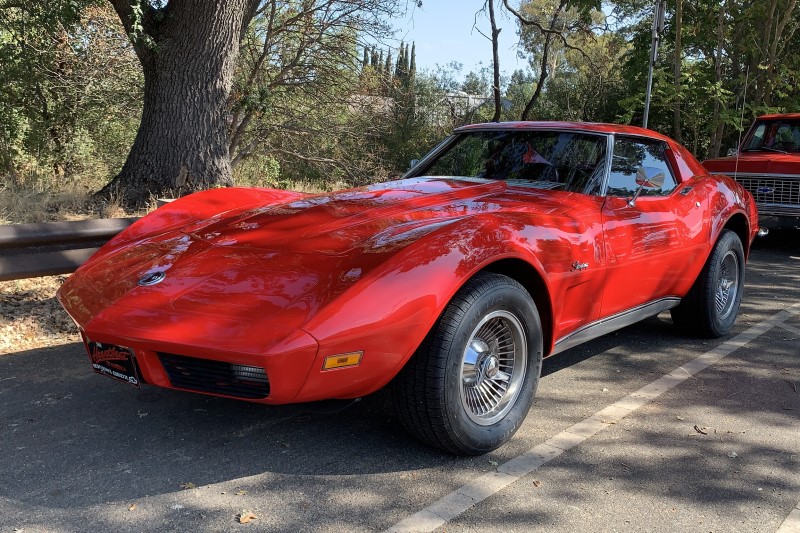 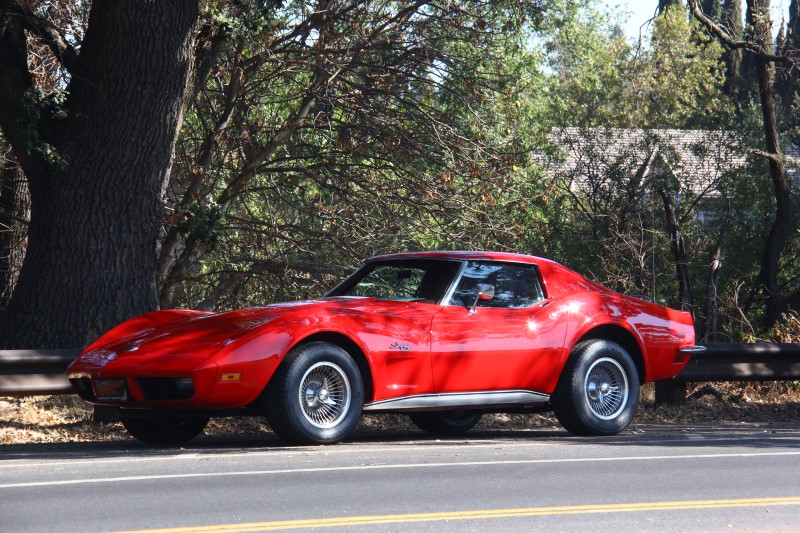 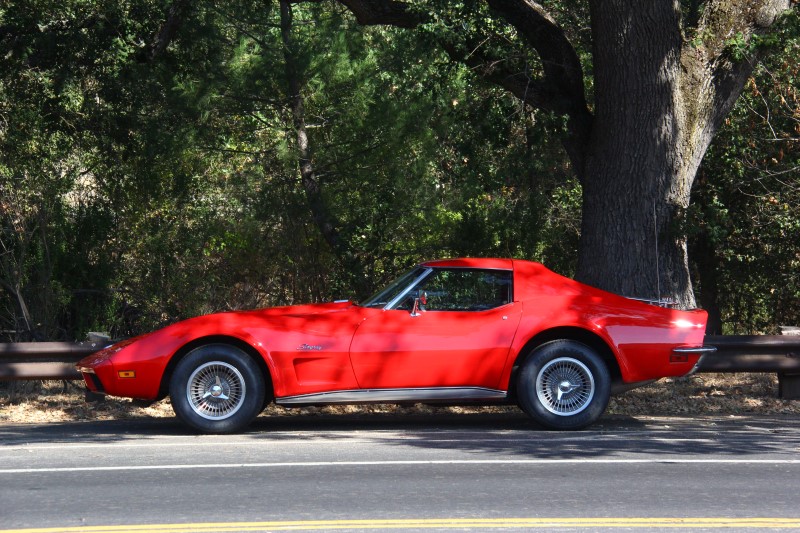 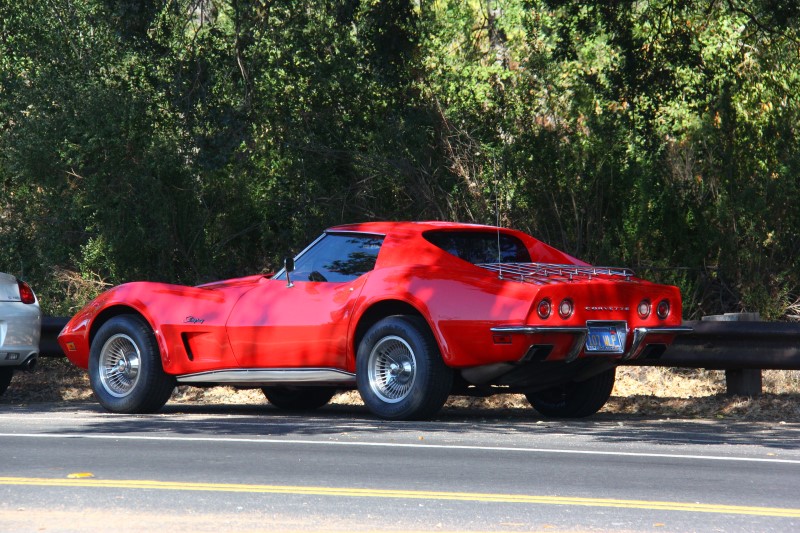 The C3 generation of Corvette has never been my personal favorite, however the C3 lasted a remarkable 14 years from 1968 until 1982. Over that time span the car changed greatly in appearance, character and performance level. The beginning of this transformation came in 1973 when the Corvette celebrated its 20th anniversary with a new urethane front bumper to comply with new federal 5-mph crash regulations. Gone was the dainty, cool but useless, tiny pointed chrome bumper and large dual eggcrate grilles. The front fenders were also modified with smaller, simpler, integral molded air vents. The result was a smoother, more streamlined and more modern appearance. Was it a styling improvement? You be the judge. 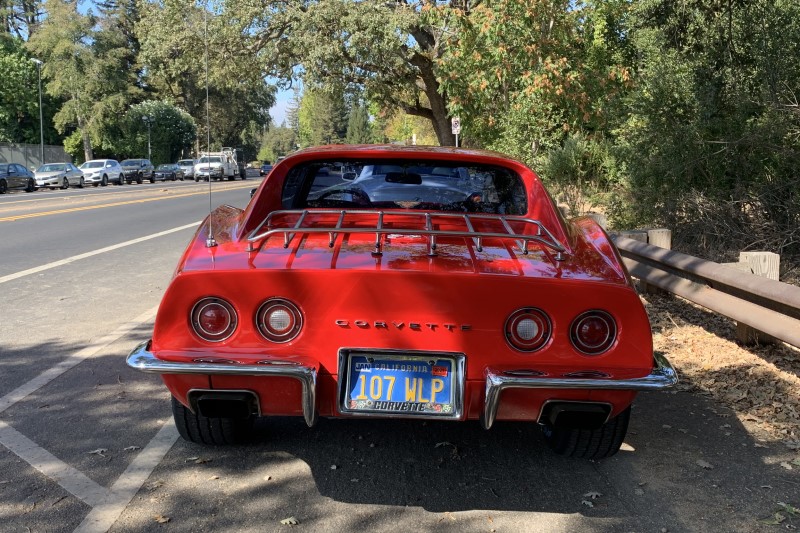 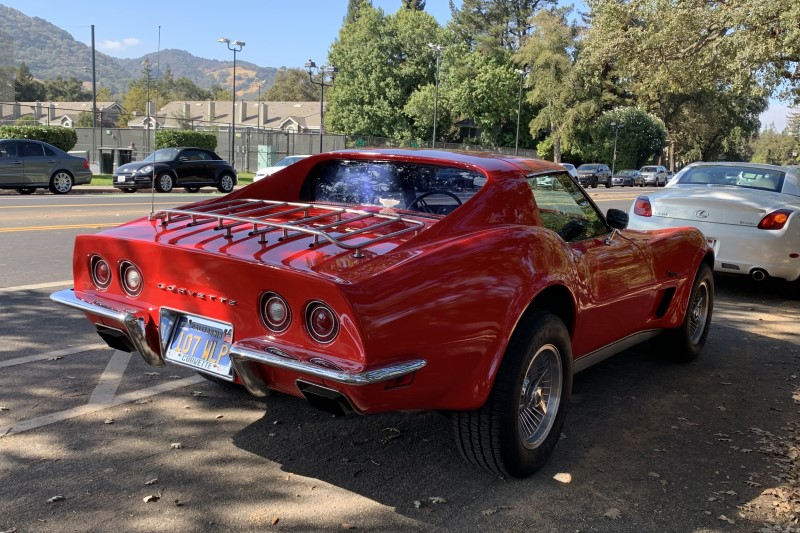 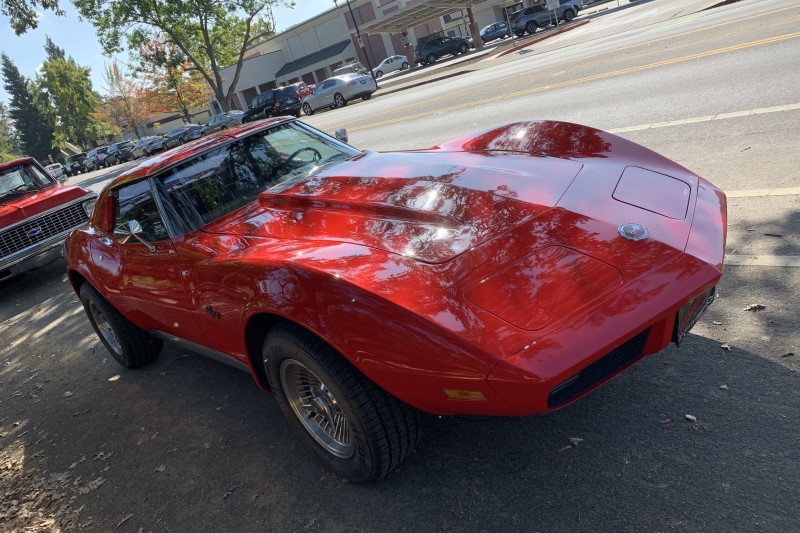 All 1973 Corvette coupes came standard with removable targa top panels. Convertible models could be ordered with a removable hardtop, which because it was the '70s, could be trimmed in black textured vinyl. GM pushed the premium factor of the car by making it quieter, from larger mufflers to more sound deadening material throughout the cabin. The usual range of premium features could be ordered: power windows, power steering, power brakes and shoulder-harness seatbelts. Fun dealer accessories included a child safety seat, fire extinguisher, hand spotlight and the rear deck luggage rack seen here. Radial tires were newly standard. 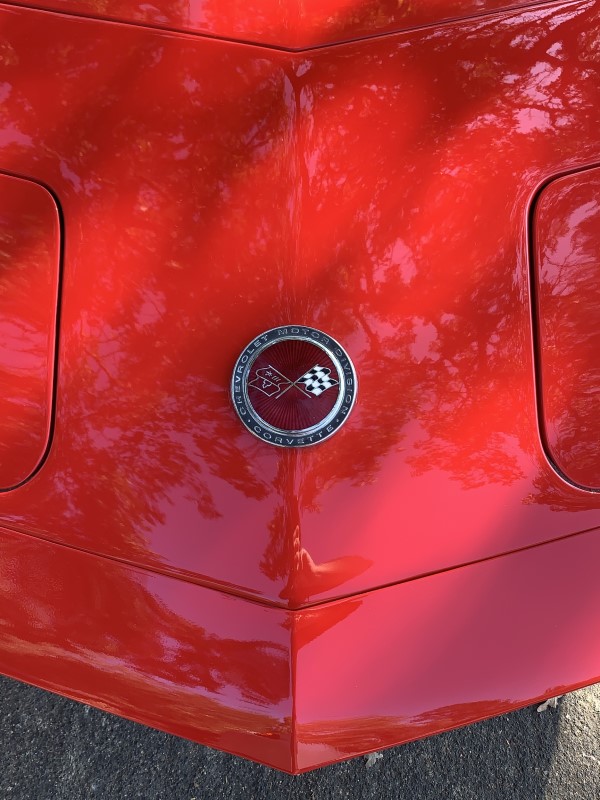 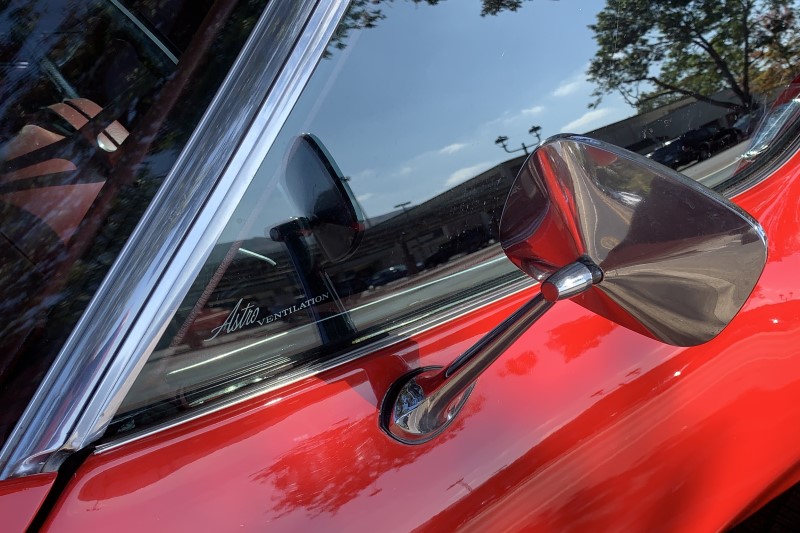 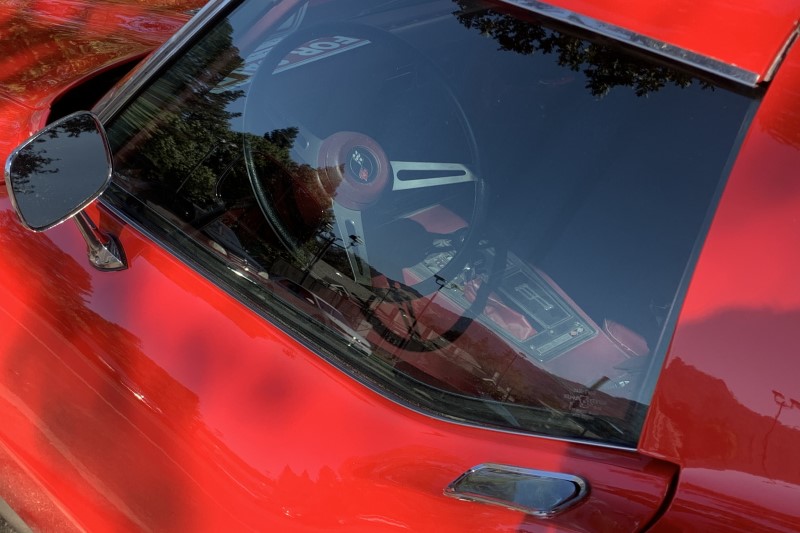 One of the curses of the early 1970s would have to be the emissions regulations. Lower compression ratios, air injection, exhaust gas recirculation and new lower-octane unleaded gasolines all meant less power than before. The standard 350 cubic inch V8 produced a mere 190 horsepower. The vaunted Turbo-Jet 454 big block only made 275 horses. It was a far cry from the days of the 435-horse 1967 Corvette Sting Ray 427. However a traditional four-speed manual was standard equipment for maximum driving fun. 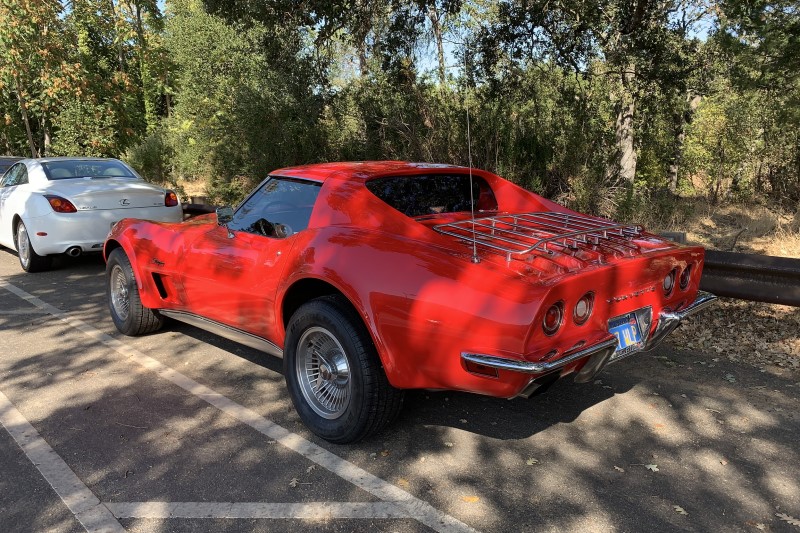 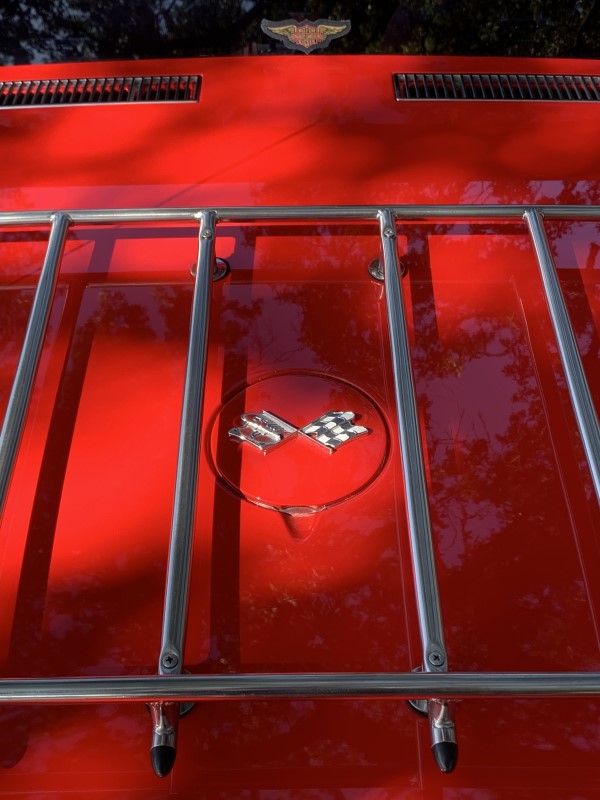 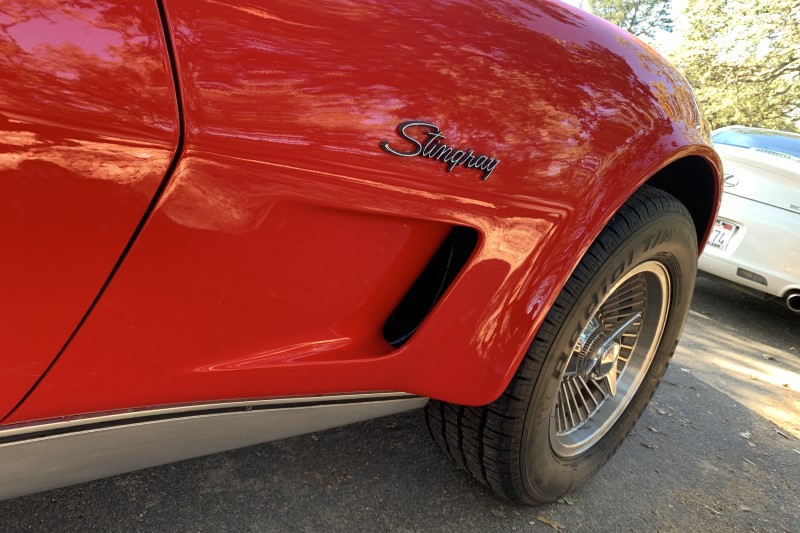 I don't know which engine motivates this example, but it is a very clean car finished in shiny Mille Miglia Red (or similar) with red vinyl interior. Note the "Astro Ventilation" labels on the windows. This refers to flow-through cabin ventilation that feeds air from the cowl, through the dash vents, and out through two vent grilles on the rear deck just below the rear window. It was an alternative to the old swing-out vent windows that were discontinued at the end of the C2 era in 1967. A flap system and later a vacuum motor kept the vents from flooding in the rain. From what I read, only cars without air conditioning had a fully functioning Astro Ventilation system, but all Vettes up through 1974 were labeled as such until the inscribed window parts supply ran out. I rather like the turbine style wheels on this car along with the spinner center caps. I can't quite place them. They look like some of the late-70s Camaro Z28 wheels, or the 1982 Corvette Collector Edition wheel. It's a cool look that evokes the C2 Sting Rays. I don't often give plastic bumper C3 Corvettes a second glance, but this one was too nice to ignore.