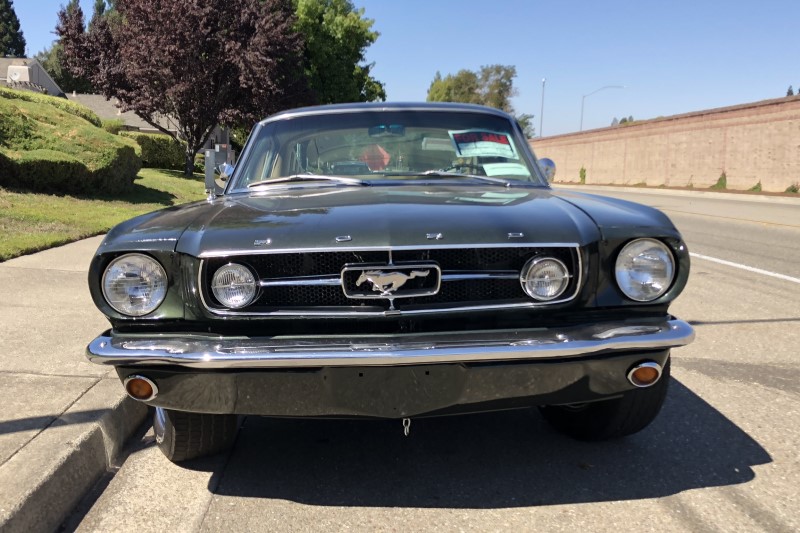 Ever have those moments when you forget an anniversary or birthday until the last minute? Yeah, me too. Today is April 17. Happy birthday to the Ford Mustang. 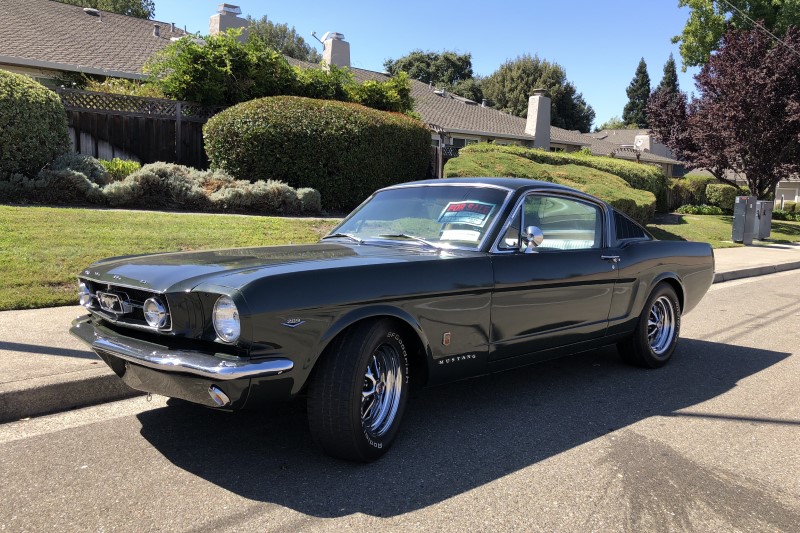 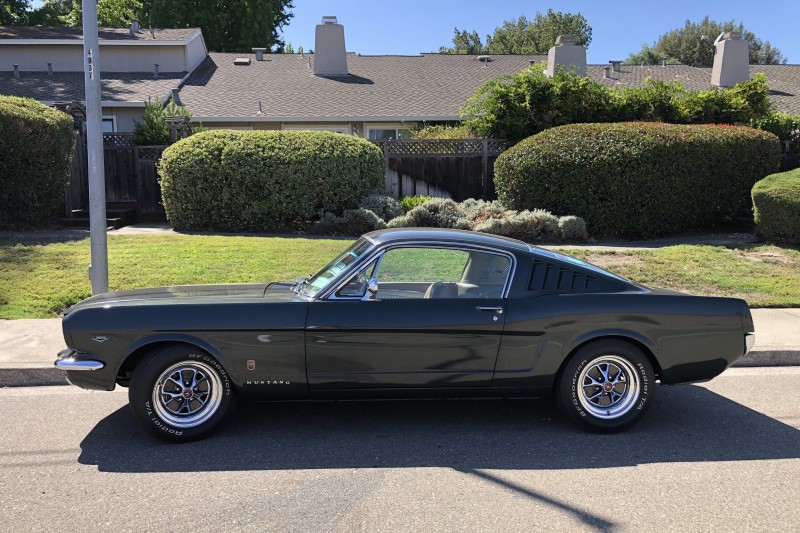 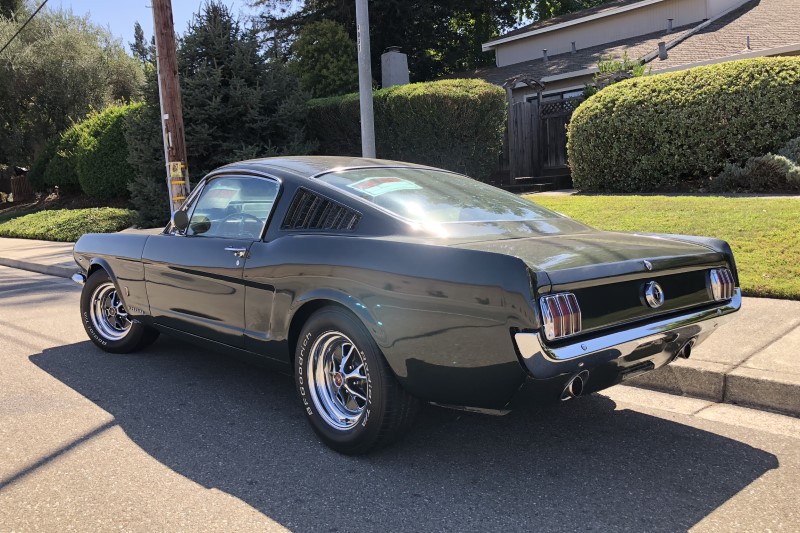 The story of the Mustang is a familiar one to many. A more stylish body on humble Falcon economy car underpinnings. More powerful engine offerings. Those now iconic three-section taillights. Lee Iacocca's baby. The Mustang was an instant hit for Ford at a time when they needed something sporty to woo younger buyers. The fact it wasn't half bad in motorsport with some tweaking didn't hurt, either. 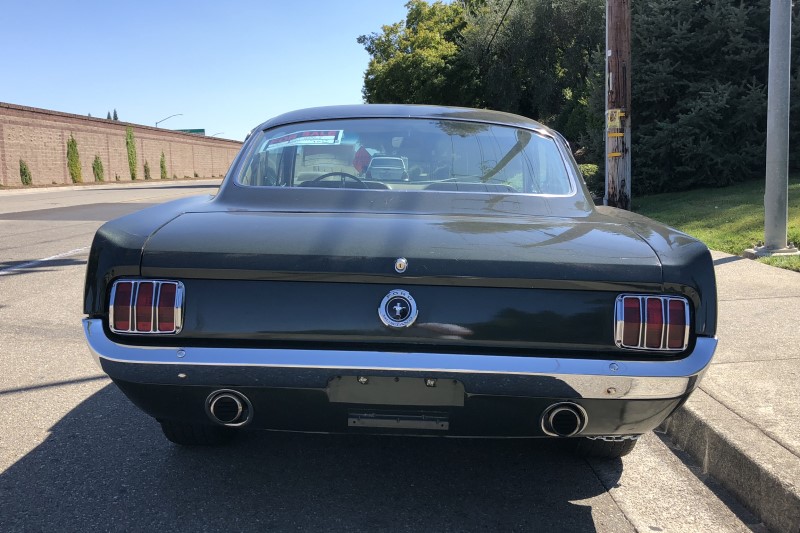 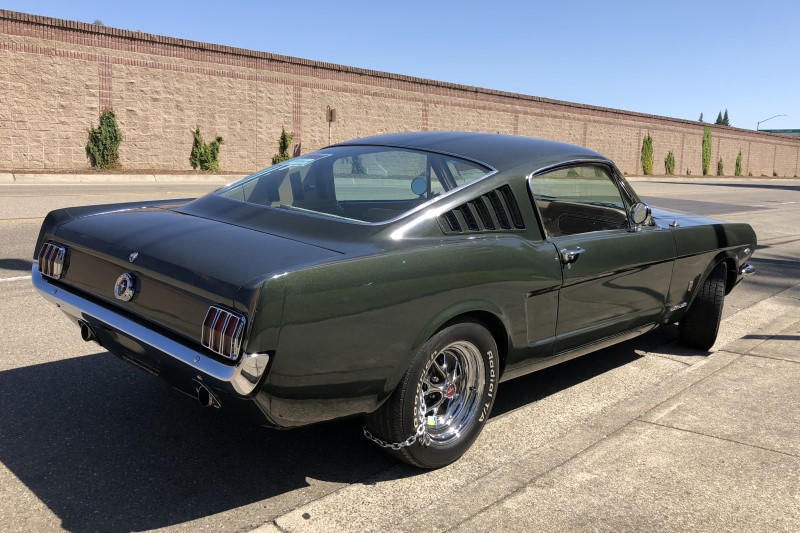 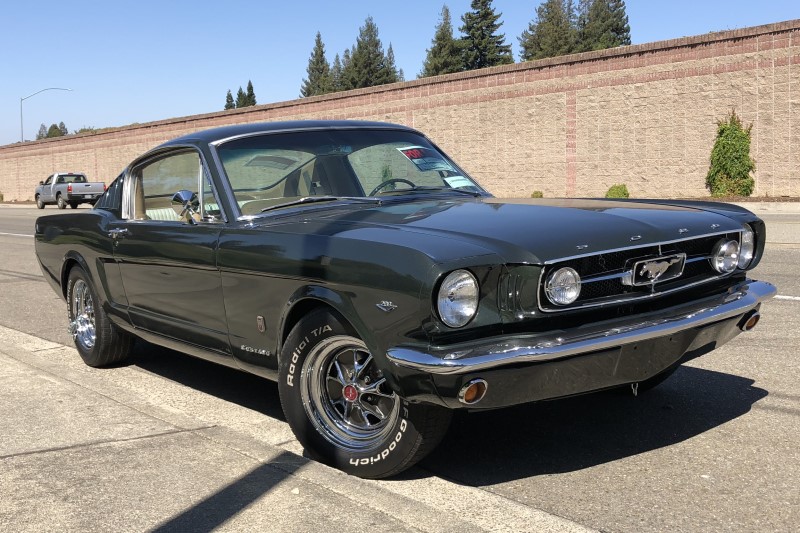 The 1965 Mustang was the first full model year for Ford's pony car. It was introduced April 17, 1964 as an early '65 model (commonly called '64-1/2). In total, over half a million '65 Mustangs were built. This included about 77,000 "2+2" fastback models, a new body style added during the model year. Of these, 5,776 were GT trim package fastbacks as seen here. The GT package was available on all coupe, convertible and fastback Mustangs. It denoted special badging, wheels, grille trim with fog lamps, chrome trumpet exhaust, and tape stripes on the rockers. Inside, GTs had a special five-gauge instrument cluster. Under the hood, GTs came standard with a 289 V8, four-speed manual transmission, or a three or four-speed automatic. A "Hi-Po" 289 V8 making 271 horsepower was available. Heavy-duty suspension with upgraded springs and shocks, front disc brakes, larger brake master cylinder, a sway bar and more responsive steering gear helped get the Mustang GT around corners better. 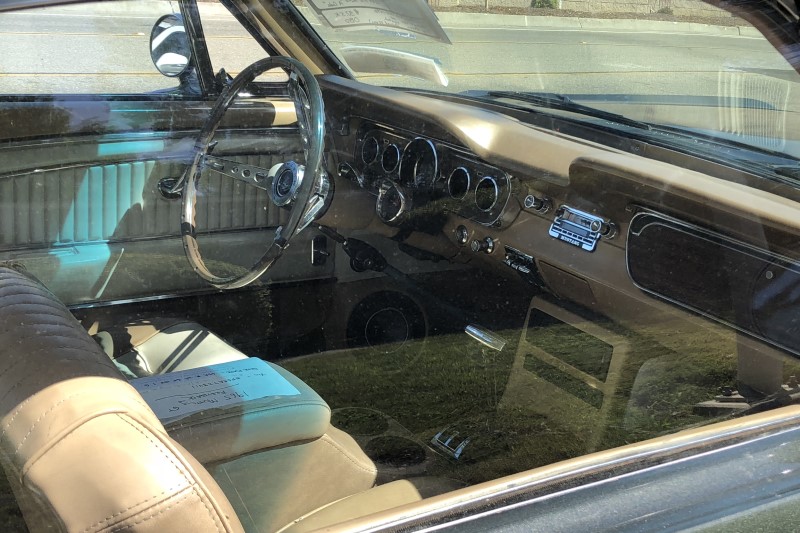 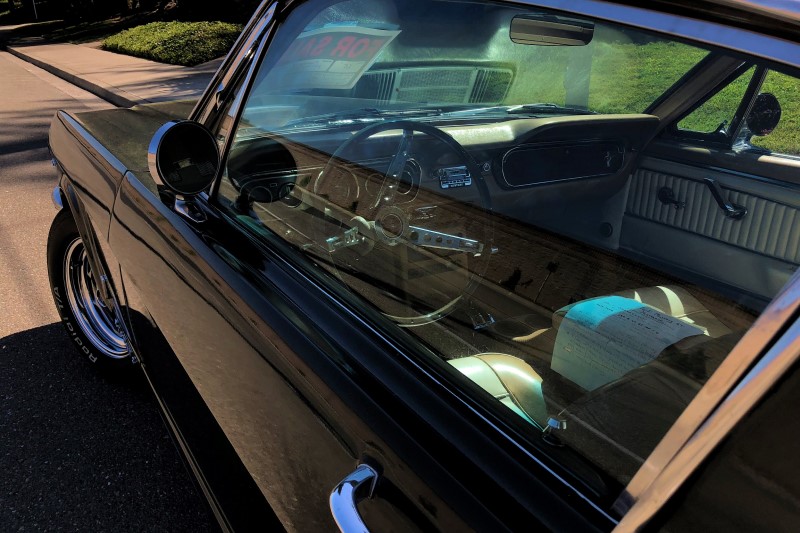 This lovely example is a solid driver with some upgrades. It sports what I believe to be a repaint of Ivy Green metallic, and is missing the factory style GT rocker stripes. It looks to be an older build judging by the condition of the paint and the style of the interior. Inside the seats look like they may be custom upholstered, or at least the leather-trimmed center console with cup holders is custom. Ditto the aftermarket tape deck in the dash and what appears to be a CD player and possibly air conditioner buttons underneath the dashboard on the console extension. Instead of hacking up the door panels, the aftermarket stereo speakers and what look like air conditioning vents have been installed in the footwell panels. The result is a clean vintage appearance at a glance while still offering modern conveniences for occupants. Under the hood is the "A" code 289 with four-barrel carburetor making 225 horsepower stock, hooked to an automatic transmission. 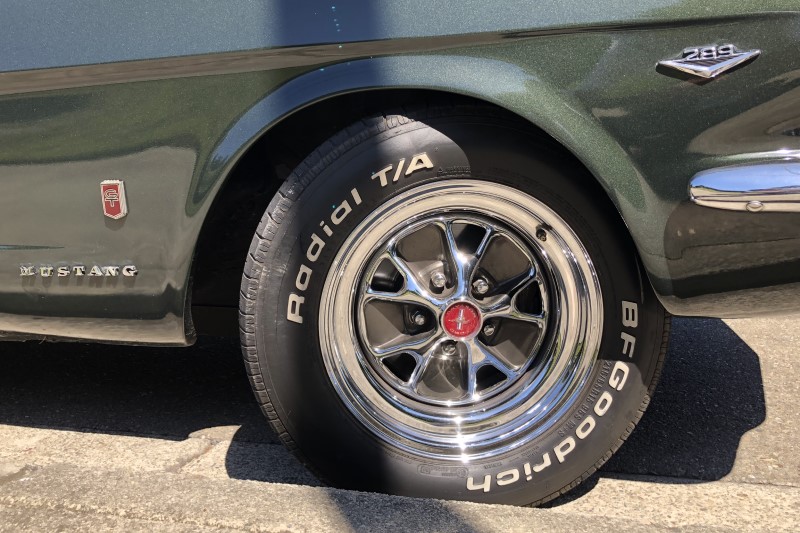 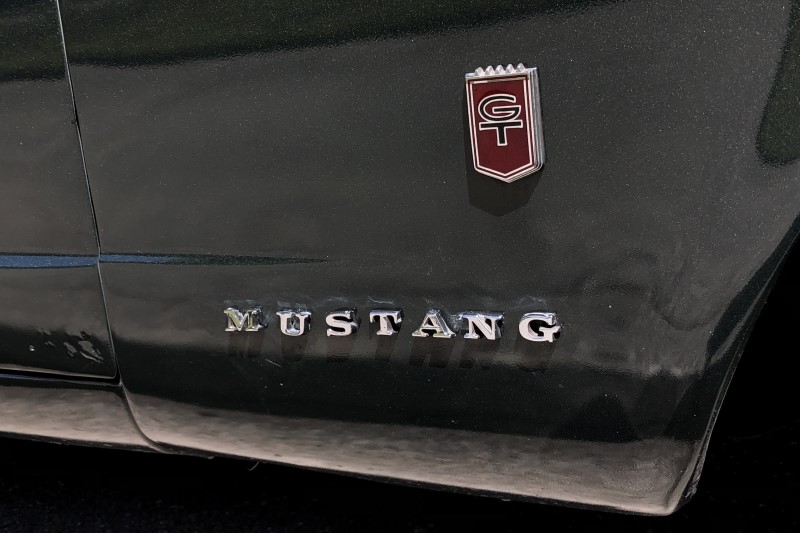 The big downside of a vintage Mustang is rust. There is a reason these cars were called Rustangs and this one has bubbles on the passenger door, in exactly the spot where they all rusted out. My dad's '66 convertible rusted out in the same place on both doors. Ford did not paint or corrosion-proof the insides of these things very well and water found its way into all the unprotected low spots. Fortunately it's possible to get replacement parts and sheet metal for virtually anything on these cars. 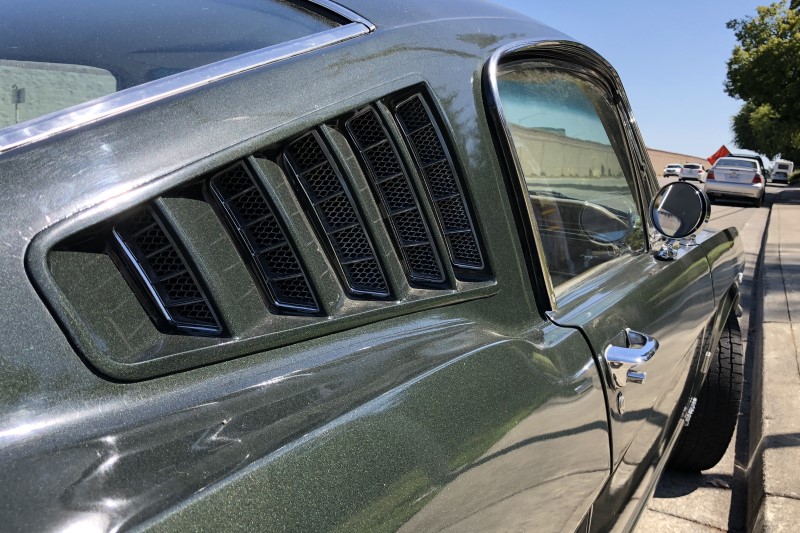 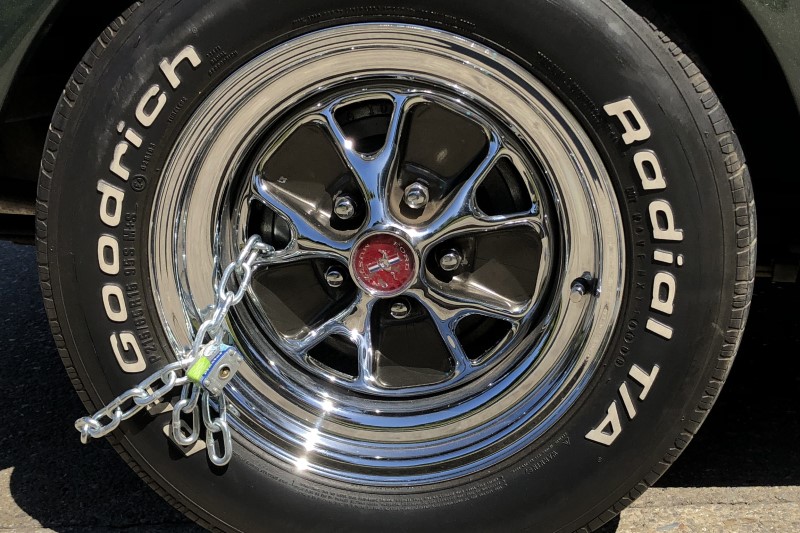 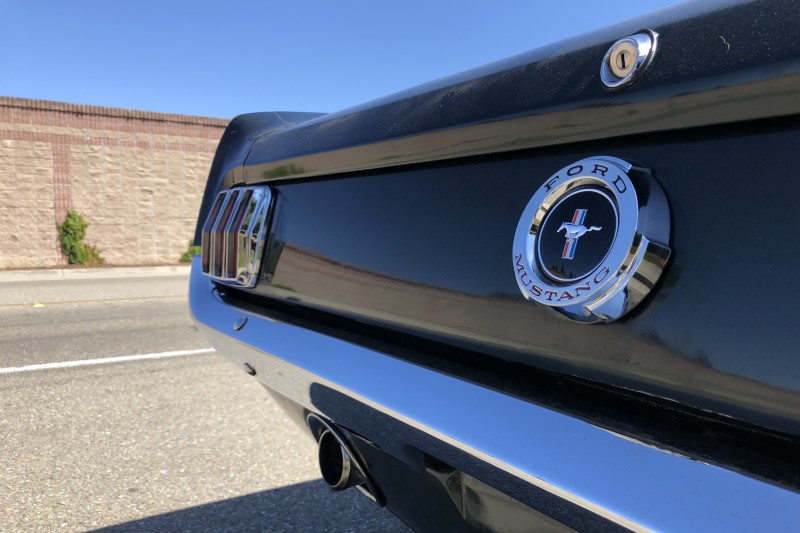 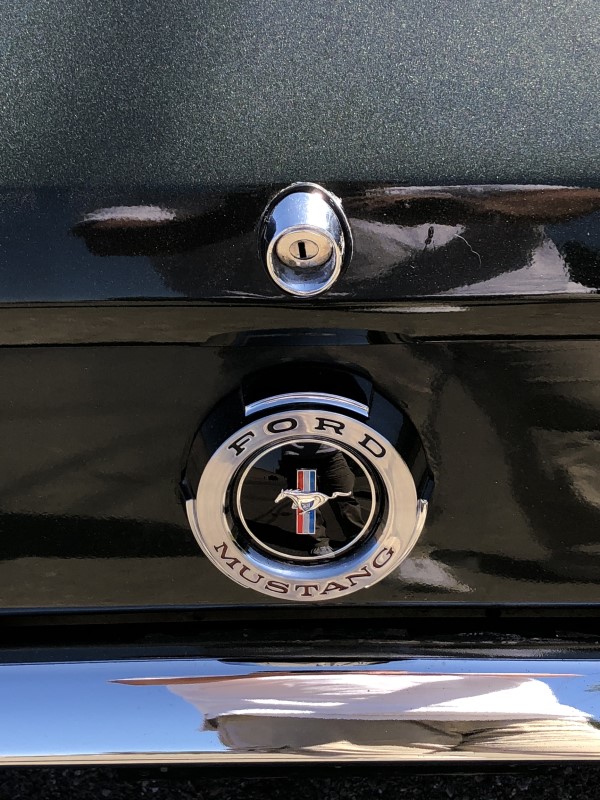 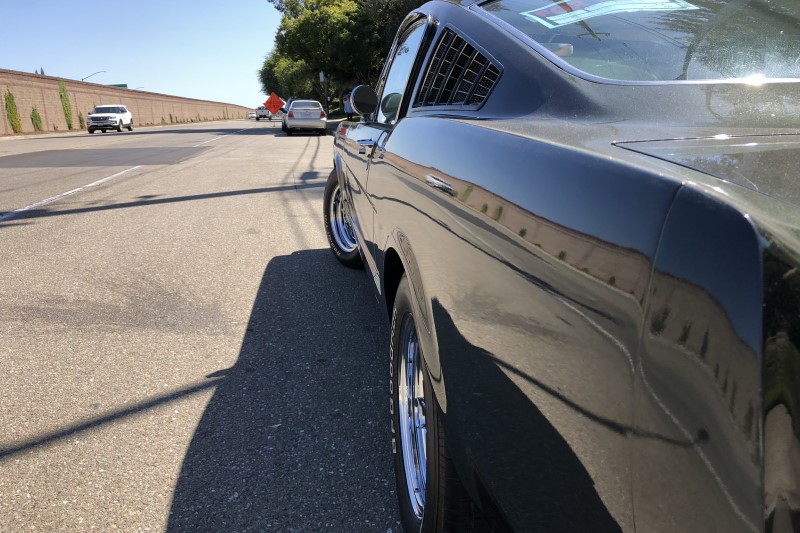 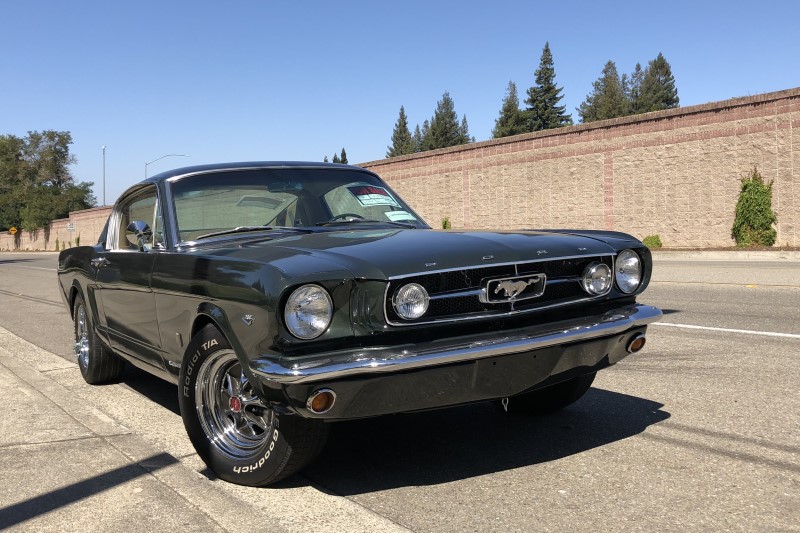 I keep coming back to this stretch of road and it's yielded a fair number of cool cars over the past few years. I believe they're mostly or all the same gentleman either paring down his collection or selling cars for friends. Several have used the interesting anti-theft device of the chain padlocked through the wheel spokes. I just enjoy getting to see them outside on the street now and then instead of hiding in a garage.

Photographed September 2018
Posted by Jay Wollenweber at 12:00 AM