One often-forgotten niche in automotive history is the Neo-Classic, a new car built to mimic the style of long, luxurious cars of the 1930s while employing modern technology in its construction. They were popular for a time, mainly in the 1970s and '80s, and were usually built using fiberglass bodies and parts supplied by various manufacturers from Detroit and abroad. Such small coachbuilders as Zimmer, Clenet, Spartan, Gatsby, Panther, Gazelle, Sceptre, Tiffany and several others came and went, their models often loosely resembling a 1920s or '30s Mercedes roadster and incorporating full fenders, fake external exhaust piping out the hood sides, wire wheels, external spare tire shells. Some utilized middle sections taken from such contemporary cars as Volkswagen Beetle convertibles (Clenet), Nissan 300ZX (Spartan II), Mercury Cougar and Ford Mustang (Zimmer), and MG Midget (Sceptre). One might call them the "retro" craze of their day, much like the factory-built retro cars of the late 1990s and early 2000s such as the Chrysler PT Cruiser and Ford Thunderbird. One of the original, and biggest names in neo-classics was Excalibur. 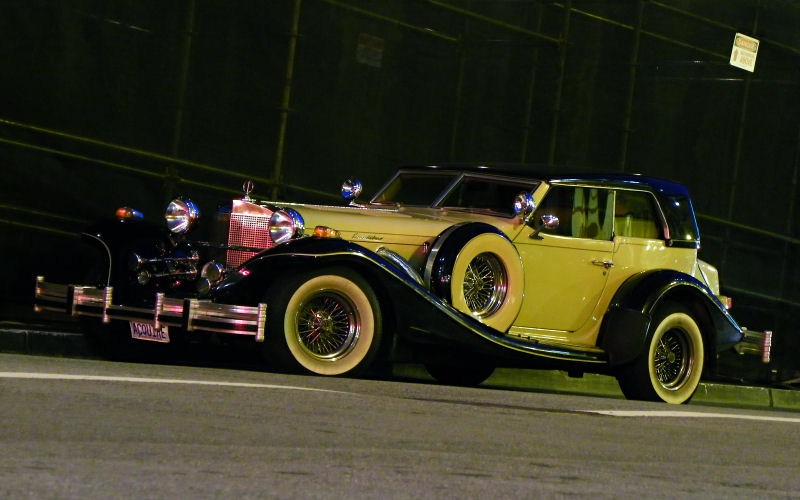 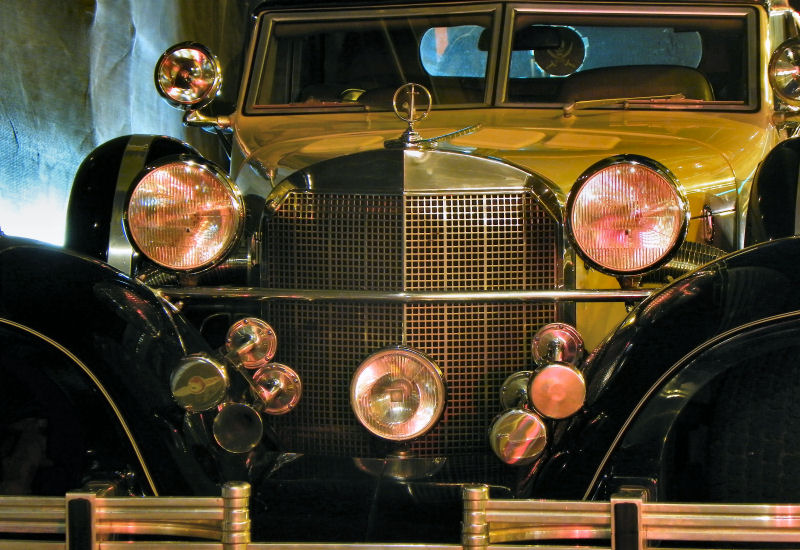 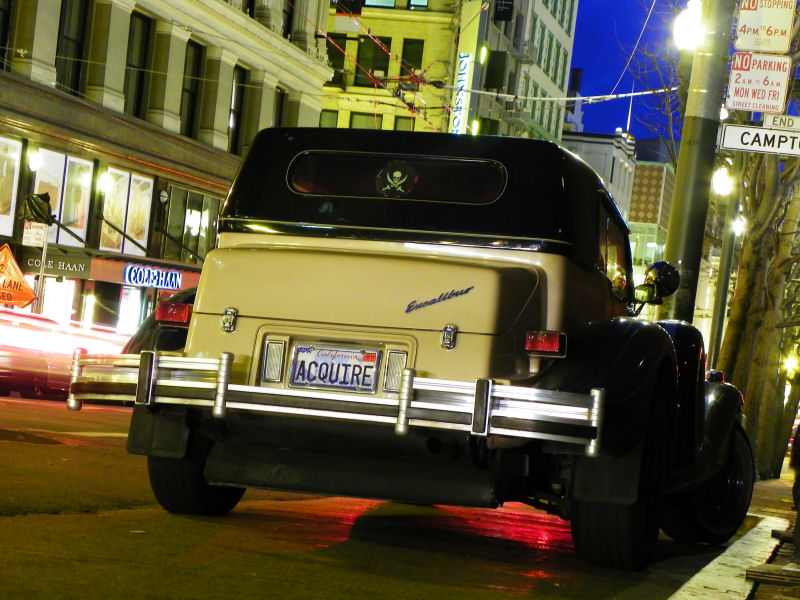 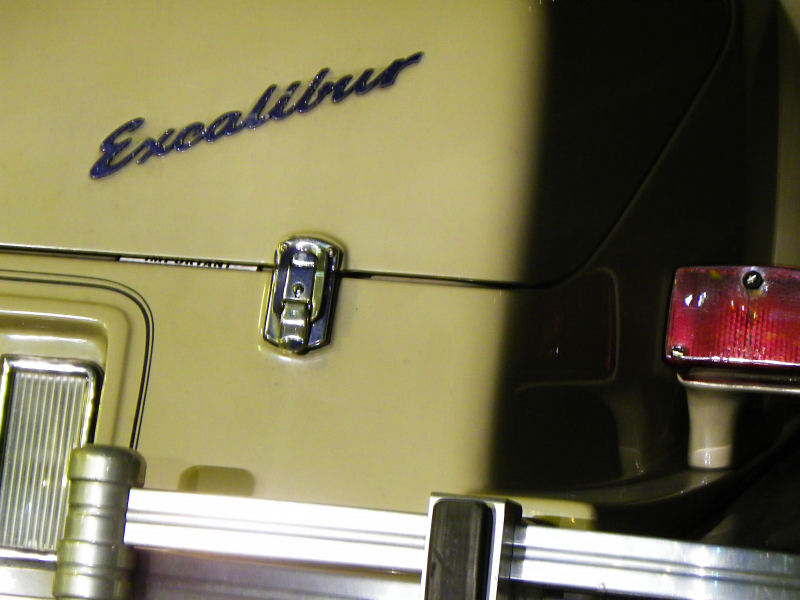 The Excalibur story began in 1963 with a concept car designed to bring people to the Studebaker auto show booth. Designer Brooks Stevens was given a Studebaker Lark Daytona convertible chassis to work with, and he created a 1930s-flavored roadster styled like a Mercedes SSK. Apparently since Studebaker was then the US distributor for Mercedes-Benz, this was okay. However, upper management wasn't okay with such a seemingly random, non-canon design being represented as the future of Studebaker, and the "Mercebaker" had to be displayed by itself in another area of the 1964 New York Auto Show. Stevens talked to New York Chevrolet dealer Jerry Allen who agreed to market the car, but with one caveat -- it had to be Chevy-powered. From that point on, all Excaliburs came with Chevrolet V8s (and soon would be built on custom frames with GM suspension components). They were wild executive performance cars - once available with a powerful 454 V8 and a Muncie 4-speed manual transmission, built to a standard rather than a price.
By the 1980s, though, things weren't looking too good. The model line had been expanded to include the Phaeton model seen here, and the car was packed with more bells and whistles than ever before -- but prices had been increased dramatically to keep up with production expenses and thanks to emissions regulations the car was saddled with a low-performance 305 strangled by smog-control equipment and a 4-speed automatic.
In 1986 Excalibur went bankrupt and passed through a series of owners, none of whom had much luck with the company. It lingered until 2003 when Excalibur was again acquired and diversified into building various fiberglass automotive products and replacement parts for maintaining existing Excalibur cars. Apparently it's still around in some form, but not presently building cars. 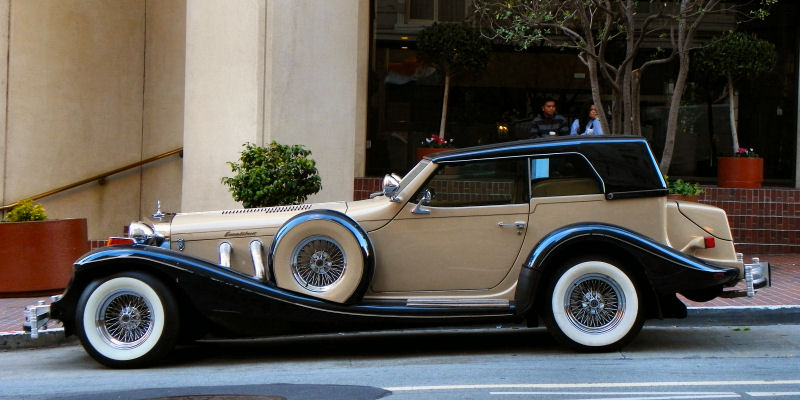 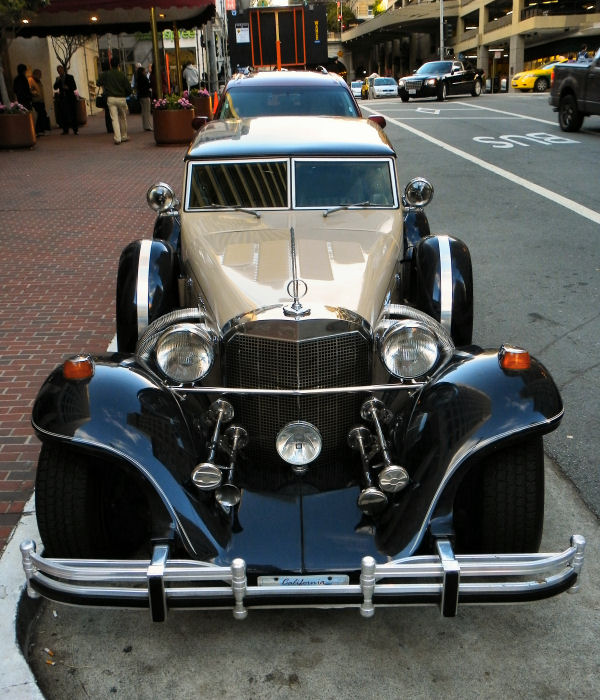 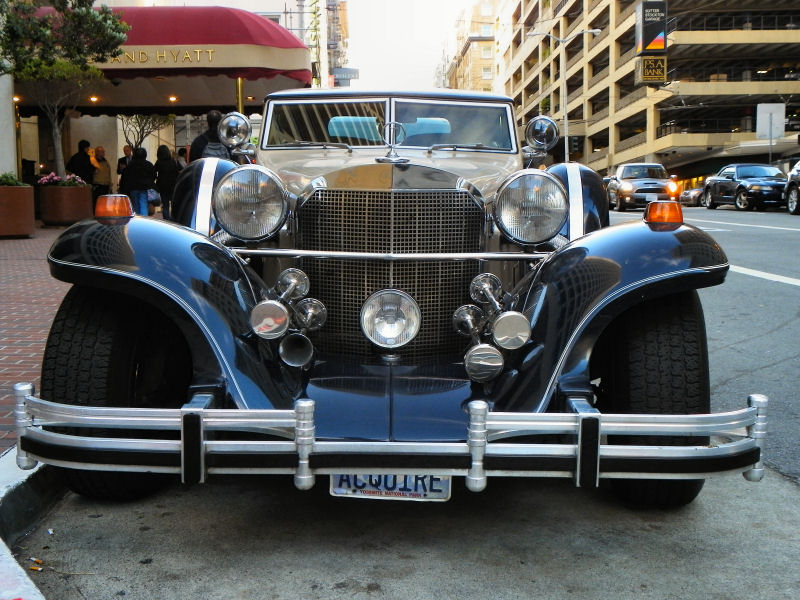 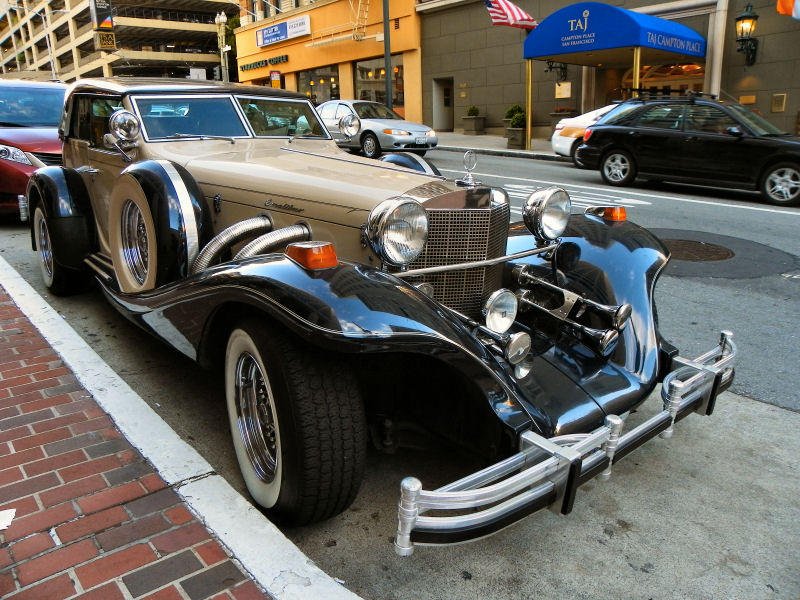 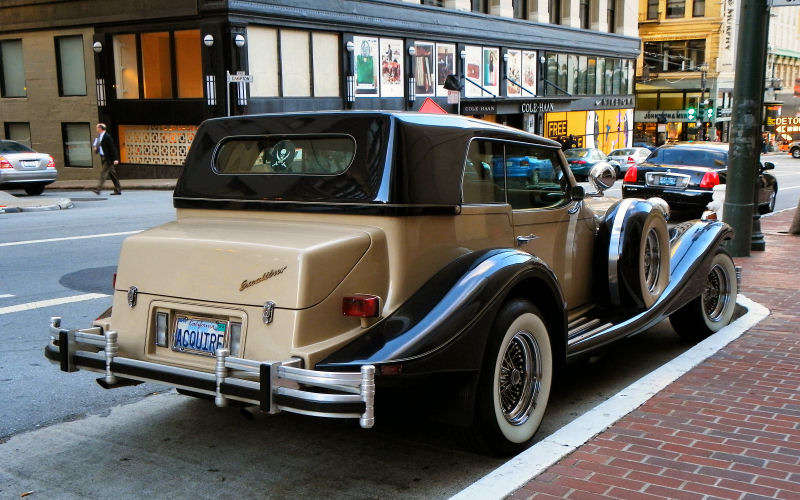 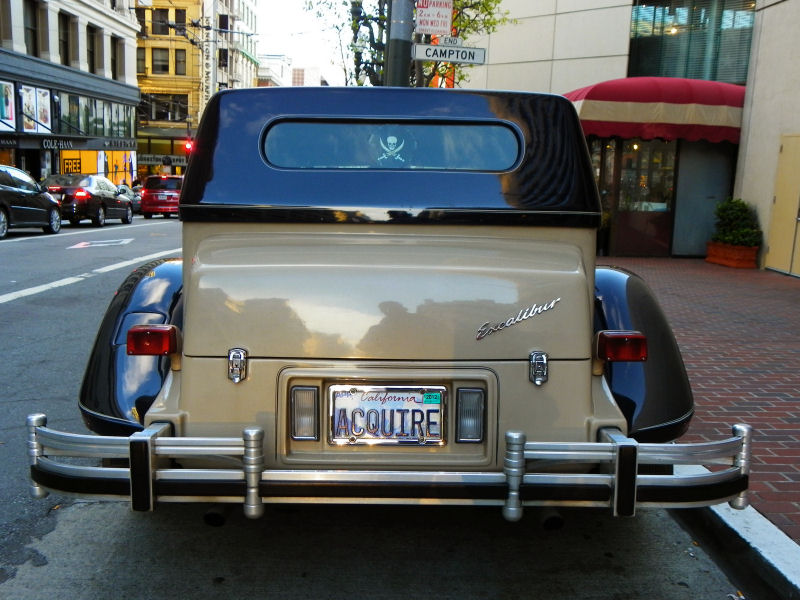 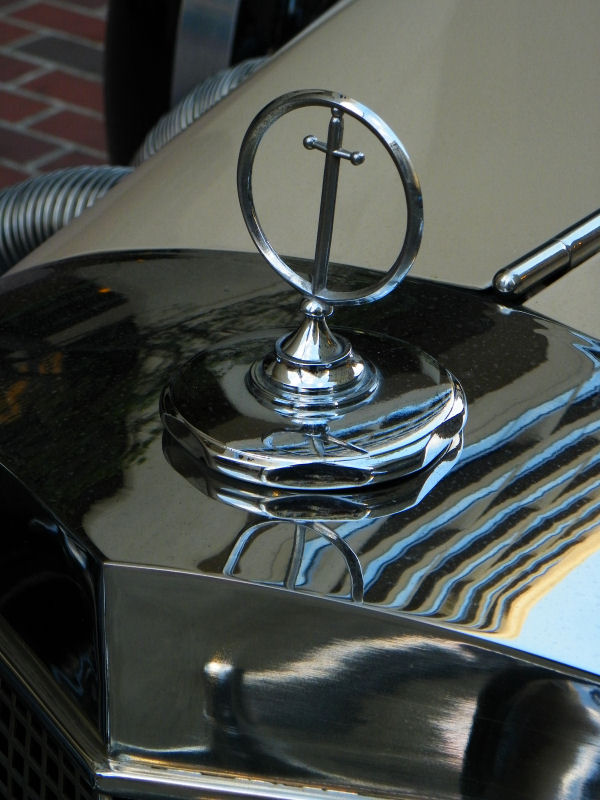 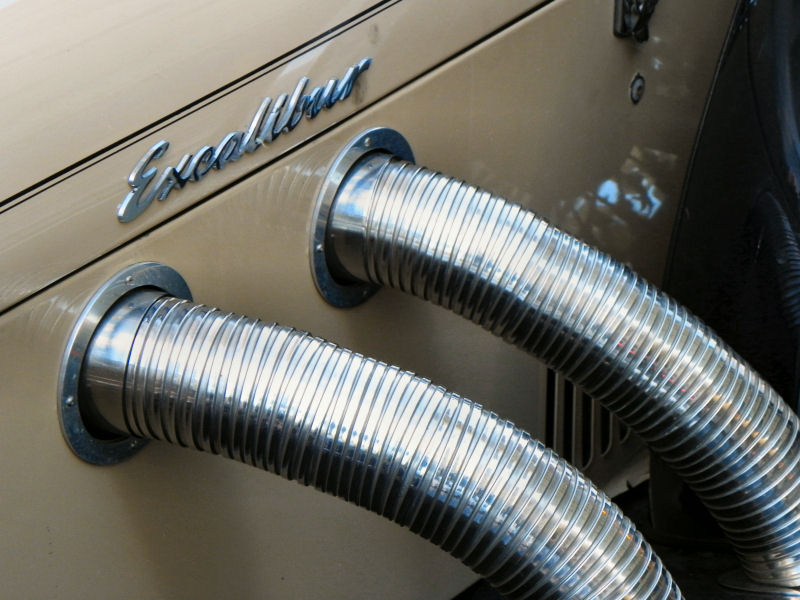 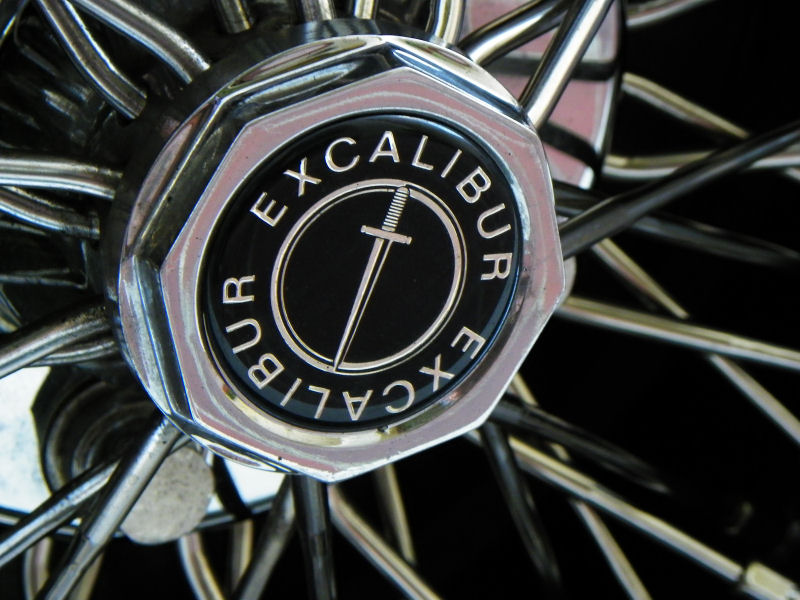 I came across this 1984 Excalibur Series IV Phaeton a few times while walking to an evening class on Post Street. It always parked in the same spot in front of a hotel on Stockton Street (only a couple of blocks from where a 1959 Edsel is rumored to live). This one features the removable hard top which came standard on Phaeton models in addition to a folding convertible top. It attracted a ton of attention, stopping dozens of people in their tracks to photograph it, call their friends about it, and speculate as to what it was. I find the license plate and rear-window pirate sticker to be a little cheesy for a car that in its day cost twice as much as a contemporary new Corvette. The Excalibur was probably the second- or third-most-expensive coachbuilt neo-classic after the rarer, more exclusive Clenet and (possibly) the Zimmer Golden Spirit. The Zimmer is one of the few neo-classics still made today in very small quantities. A number of the other competing brands were homebuilt kit cars that never approached the level of quality or value of the Excalibur, and these cars can still fetch more than $40,000 in good condition today.

Maybe Studebaker should have listened.
Posted by Jay Wollenweber at 3:00 AM